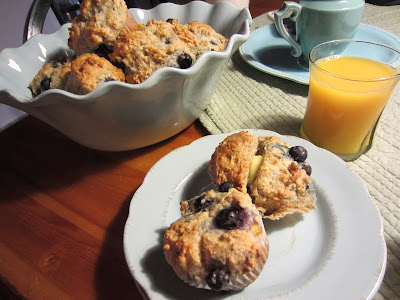 Hubby worked so hard for me this weekend! So when he was gone Sunday morning, taking our trash and recycling to the transfer station, I whipped up some Easy Banana Blueberry Muffins for him.
(You can find this recipe under the heading 'Baking' on my categories list)
It was cold this weekend. With fits of snow. Nothing that stayed around, but it was not a good weekend for working outside. But Hubby braved the elements so he could do a few things for me.
One of the chores was cutting down my beloved Golden Chain Tree. It was badly damaged in the recent ice storm, and listing so far over to the side that we couldn't save it. 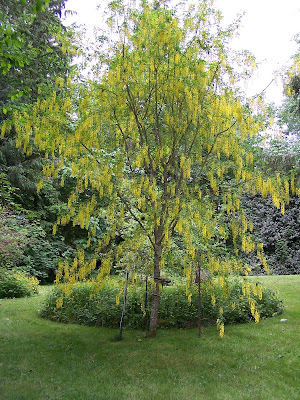 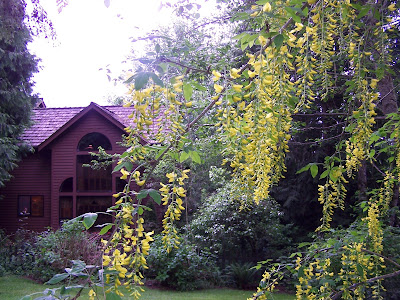 This is what it looked like last summer. It would fill the whole yard with it's beautiful scent and would attract so many bees that you could hear them buzzing from the house.
My youngest son planted it as a gift to me on Mother's Day a few years ago.
The whole time Hubby was cutting it down, I couldn't watch.
I asked him afterwards if he felt bad. He told me that while he was doing it he thought of the look on my youngest son's face when he gave it to me. A mixture of love and generosity, and pride.
He also had to cut down one of my dwarf apple trees. It too, had fallen over from the storm.
We love our trees and it is always sad when we lose any.
We are making some progress on the clean up, but it is going slowly due to the cold and wet weather. But every little effort brings us closer to our goal. 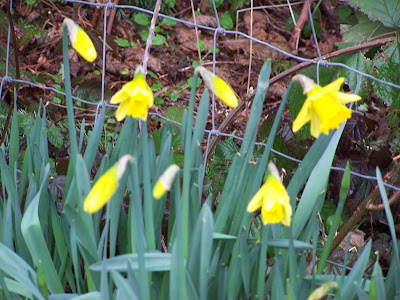 Look what just started blooming! I don't know what variety these daffodils are, but they have been coming up this early for years. I bought a mixed bag of un-named cultivars one year and they have rewarded me with their beauty ever since. A little surprise at a time when they are very much appreciated. 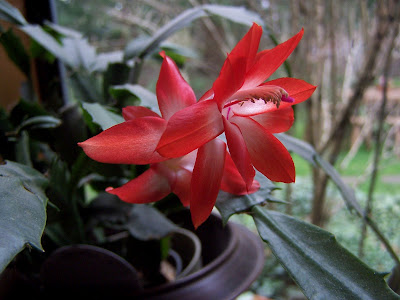 My Christmas cactus has also been blooming.  Like a bright, tropical bird that has come to visit. 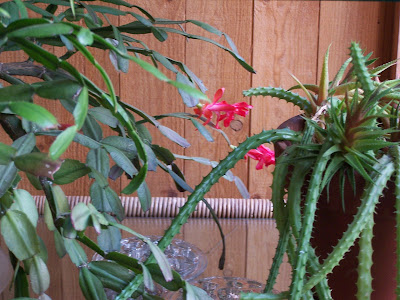 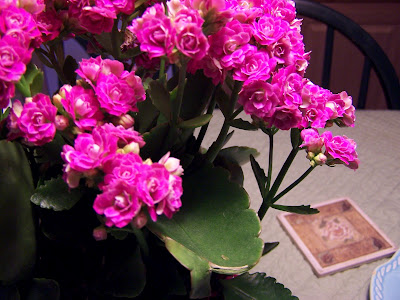 And seeing I'm on a roll.... my Kalanchoe is blooming it's little heart out.
So I moved it to the center of my table.
Flowers add to the quality of life in a way that can't be defined. 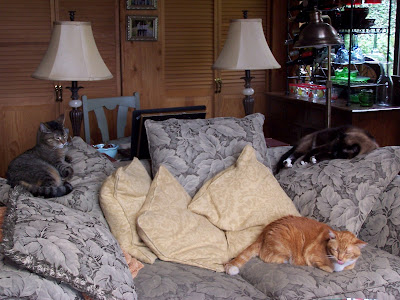 These little sweeties have been pretty much decorating the couch all weekend. For some reason they like to lie right on top of the pillows until they get them squished just the way they like them.
It's a good thing they haven't wanted to go out lately.
We've had visitors. 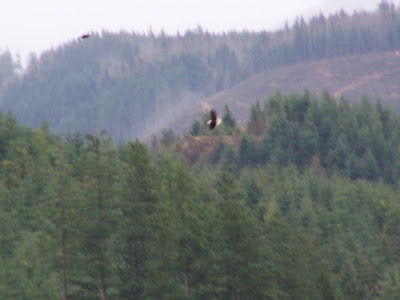 Every day this bald eagle flies right over the house. And circles. He has friends. 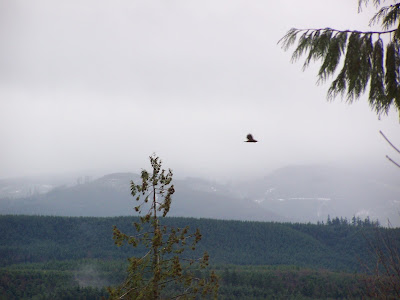 He is always accompanied by another eagle. The second one doesn't have it's white coloring yet. 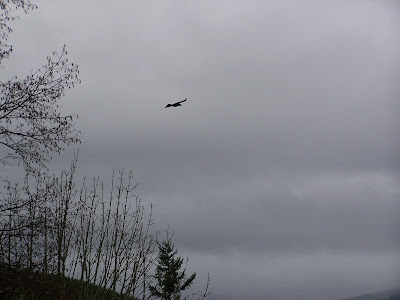 They are also accompanied by two red-tailed hawks and two ravens. Always.

I have noticed this sort of friendship before.

I believe they all help each other find food. Whether it is spotting a cougar or road kill, or whether it is 'herding' of prey, such as flocks of ducks, they all work together.

I let Ling Ling out on the deck the other day, only to rush over and grab her when the bald Eagle made a very close pass. He had circled around when he saw her. Unless you have seen one of these magnificient birds up close, you can't appreciate how big they are.

My camera doesn't do justice. 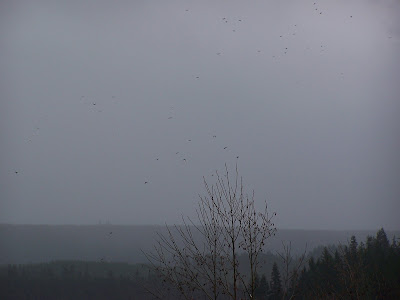 We have also had a very large flock of crows fly over every evening on their way to roost. These crows have been roosting in the high foothills ever since we moved here. Except for the last three years. During that time we had a hawk living right along this route that would attack them as they flew over. So they changed their route. But the hawk is gone, so they are once again flying overhead every evening. There are about 75 of them.
I love crows. One year I had part of that flock hanging around every day. They had discovered the dog food. Every day they would wait for me to feed my three big dogs and then swoop down and gobble up the dry kibbles. I enjoyed them at first. They were comical and sweet. One would find something in the grass and bob his head and make little chattering sounds. That meant, 'Come and look what I found!' They always shared. They never fought. The adults would leave the young ones in the trees for the day while they went out searching for food. The young would sit in the trees making mewing sounds, just like kittens.
But because crows like to share and because they are so gregarious, the little flock turned into quite a raucous crowd. I had to cut them off. They begged for days. But eventually they left. I had to do it during the summer when they were sure to find food elsewhere. 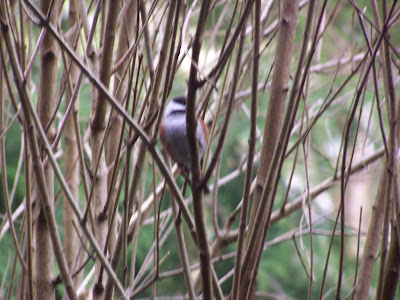 Every year we have varied avian visitors. These little guys live here year round. But this year has been difficult for them.

We have a predator. 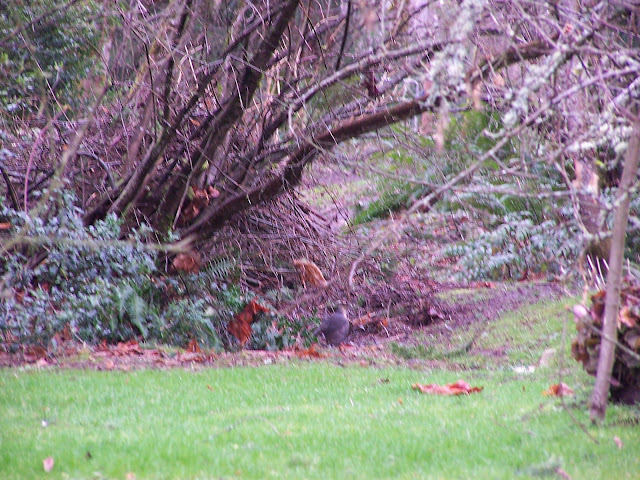 I don't know if you can see him in this shot. He is on the ground right at the edge of the grass, directly in the center. He had just caught a robin. Right in front of me. I had come out to do some clean up on Friday afternoon and he swooped down and grabbed that little robin so quick. I didn't know what to do. I stepped forward and he flew into a thicket with the robin. But then he flew out. I went into the thicket to see if I could save the robin, but his neck was broken.

So I left. I felt bad. But the hawk has to eat, too. I just wish he would live someplace else. I have seen him before. He even swooped down on my cat one day. Ninky was coming around the corner of the toolshed. I was watching out the kitchen window. There was a flash and Ninky spun around to see what hit him. He had no clue. But I had seen and knew it was the Cooper's Hawk. Maybe asserting his territorial rights? He is too small to hurt the cat. But I admired his bravery.

He has been living here since early fall. I hope he is just a winter visitor and will move on come spring.

Well, the Oscars are on and I must go now. I must make some new observations.

The stars are out.