Having recently lost my Mother, I wanted to dedicate this to her. I have my own unique perspective, among 5 daughters (with me being the eldest), of memories of my Mother when she was very young. She was beautiful, with her thick, black, wavy hair, her flawless olive complexion, her perfect profile and long legs. She had a classic style and I remember her best in her 'Jackie O' suits and sleeveless shifts of the early 60's.
She loved to decorate and would save up to purchase a special piece of furniture from her favorite store, Ethan Allen. I was lucky to inherit one of those pieces, a beautiful secretary desk that I remember from my childhood. When I was 11 we moved into the house of her dreams that she and my Dad had custom built, after many years of scrimping and saving. I remember the joy she took in decorating it room by room, with such care and love.
The love of her life was my Dad, whom she met her senior year of high school when he had just returned from the military. He nearly ran her over in his red Ford convertible when she was crossing the street in front of her house. My Dad was smitten from that moment on. Their love affair lasted 58 years. She was his partner in every sense, rolling up her sleeves and doing whatever it took. Together they faced many trying situations and always persevered. They moved cross country from New England to New Mexico when my Dad was layed off from a 20 year position, built a home, moved again to the Pacific Northwest and built again, with their own two hands, the home they lived in for the last 30 years. In the meantime my Mother was always right there, leaving behind all that she had known, all of her family and friends, to embark on whatever adventure my Father took her on.
She lived her life with courage, perseverance, and fortitude. She sacrificed and worked hard to follow her dreams. She was not afraid to stand up for what she believed in and defend herself or others. She had a soft spot for animals and I remember driving to my cousin's recital one evening, back in New England as a small girl, and passing through a busy 5 way intersection where somebody cruelly dumped a puppy in the middle of traffic. My Mother stopped all the traffic and rescued that puppy who became my best friend throughout my childhood. That was the way my Mother was, and she never apologized or tried to be any different. She stood her ground.
In her final years she suffered through and overcame cancer twice, and because of the chemo-therapy developed heart disease. She watched my Father descend into Alzheimer's and bravely tried to care for him until it became impossible. It broke her heart to have to release my Dad to a nursing home and she never recovered from the loneliness. That is what finally made her give up. But right to the end, she was by his side, even moving into the same nursing home just to be with him, even though he didn't remember who she was. Loyal to the end. 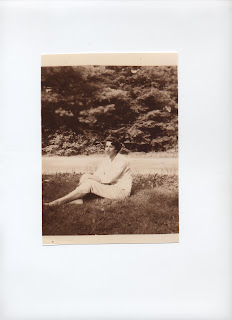 And now it is the first Mother's Day without her, but she is there in our hearts reminding us to live life with courage and perseverance, to stand up for our dreams, to speak up and act when we see injustice, and to stay loyal to those we love. Happy Mother's Day to all of the wonderful, caring, resourceful Mother's who share that same dedication to family and home.
Posted by Karen @ Beatrice Euphemie at 12:07 PM