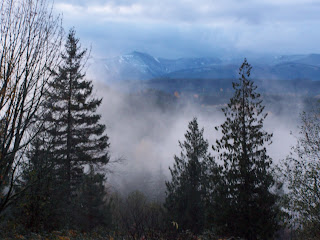 We have had a very cool summer this year. It has been very unusual to have the clouds remain so late in the season. The local ski resort, 45 minutes from here, just closed for the season! This is the latest it has ever stayed open. As I sit here on my misty mountain, watching the clouds roll by, I am reminded of how quickly the weather can change. Not much happens out my windows except for the weather. And sometimes, that can be quite dramatic. 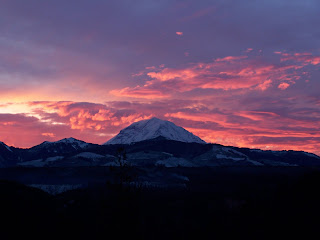 This was taken one very early Fall morning. I don't usually wake up early enough to see the sun rise, but on this particular morning, I was glad I did. 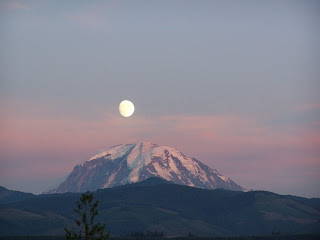 In late summer, the moon sometimes rises just as the sun is setting. I remember watching this moon rise all alone, as Hubby was travelling. He called me soon after to tell me to watch the moon rise, as he had also seen it come up from Spokane. It was nice to know we were both watching at the same time. Even though he was not with me, we shared the same thing. 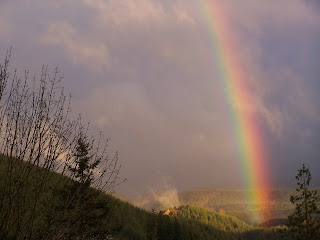 In the Spring we are always treated to beautiful rainbows. The position of the sun as it is setting through the narrow river valley creates this beautiful play of light. 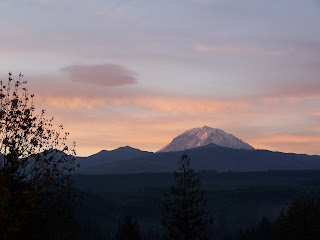 This is a late summer sunset. The snow is melted off the foothills and part of Mt. Rainier. The mountain creates it's own weather and sometimes forms swirly cloud formations that drift away. You can see one of them off to the left, high in the sky. 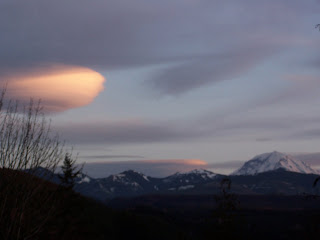 Here is a large swirled cloud formation. This is a little later in the season, you can see some snow on the foothills now and the leaves are gone off the trees. 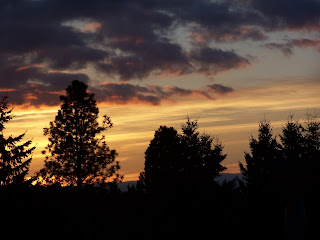 This is a mid summer sunrise. I have taken it from the ground below my deck. I have no idea why I was awake and out on the ground that early! Probably calling a cat! 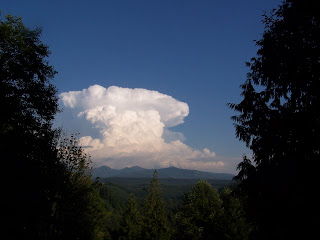 In late summer we sometimes get thunder storms. You can see this large thunder cloud forming right over Mt. Rainier which is partially hidden by the massive cloud. I wouldn't want to be on the Mountain during that storm! 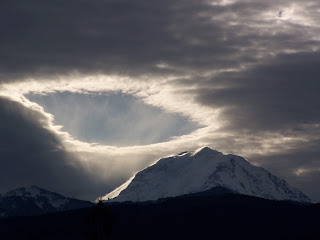 I call this the 'Hole in the Sky'. It was late morning in mid January and the clouds were rapidly coming in from the right. (South West) But the Mountain's atmosphere must have created this vortex and the clouds just swirled around it. It was amazing and I have only seen this happen once. 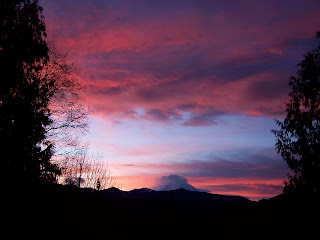 Another winter Sunrise. You can see the Mountain has a little cap of clouds.
So even though nothing much happens besides the weather around here, I can truly say that is alright by me.
﻿
Posted by Karen @ Beatrice Euphemie at 1:36 PM