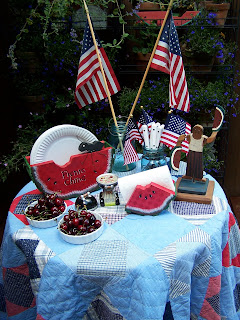 As Hubby and I prepare to celebrate this 4th of July Holiday, I started to think of what Independence Day really means.
'The measure of a democracy is the measure of the freedom of its humblest citizens.'
John Galsworthy 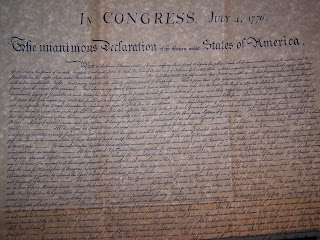 ﻿
This is what I found. In a copy of the actual Declaration of Independence that my dear daughter J had sent for as a young student, were these words written in the foreword of a little pamphlet that came with the document,  written by Warren Burger, Chief Justice of the United States from 1969-1986:
'In the last quarter of the 18th century, there was no country in the world that governed with separated and divided powers providing checks and balances on the exercise of authority by those who governed. A first step toward such a result was taken with the Declaration of Independence in 1776, which was followed by the Constitution drafted in Philadelphia in 1787; and in 1791 the Bill of Rights was added.
In place of the absolutism of monarchy, the freedoms flowing from this document created a land of opportunities. Ever since then discouraged and oppressed people from every part of the world have made a beaten path to our shores. This is the meaning of our Constitution.
'Government of the people, by the people, for the people, still remains the sovereign definition of democracy'
Sir Winston Churchill
﻿
But what does this really mean? Why do we celebrate our Independence every year? 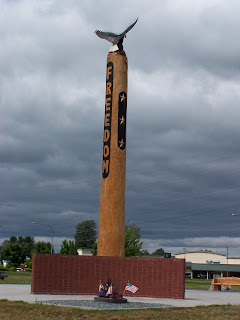 I decided to stop at the new Veteran's Memorial Park just completed in the little town nearby. I needed to think about things. Here was our very own 'wall' of soldiers who gave their very lives in all the wars fighting for our freedom. Both sides had names carved into the solid polished rock. 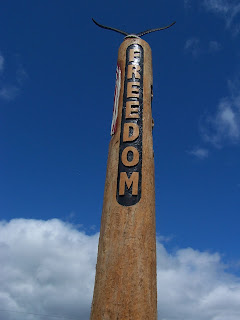 One side of the massive Cedar erected in the center of the memorial, had the words 'Freedom'. 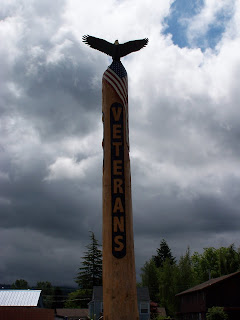 The other side had the word 'Veterans' carved into it. This is a logging community and it is only fitting that this majestic Cedar tree was used as the Memorial's Centerpiece. 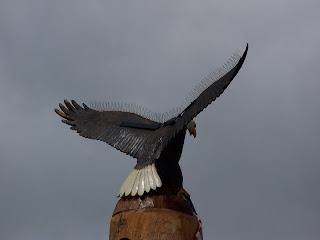 And there, at the very top, the symbol of our Country, the Bald Eagle, with outstretched wings and holding the American Flag in it's talons.
I thought of all the lives sacrificed fighting for our freedom.
Freedom to decide who we want to lead our country.
Freedom of Speech.
The right to Equality.
The right to fair Representation.
And I realized, this is not to be taken for granted. People all over the world still live oppressed lives. They are not allowed these rights. They can't elect their leaders. They don't have freedom to speak their mind. They don't have fair trials. They don't have human rights.
'Democracy...is the only form of government that is founded on the dignity of man, not the dignity of some men, but of all men.'
Robert Maynard Hutchins 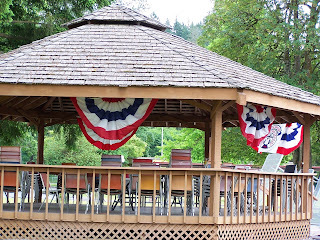 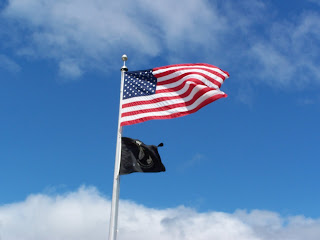 'As I would not be a slave, so I would not be a master. This expresses my idea of democracy. Whatever differs from this, to the extent of the difference, is no democracy.'
Abraham Lincoln
Let's be thankful.
Posted by Karen @ Beatrice Euphemie at 10:03 PM