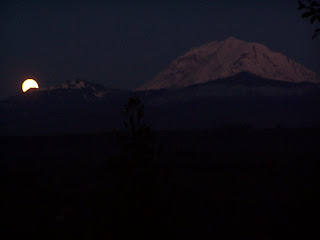 This morning, as I sipped my first cup of Java, I stepped outside onto the deck to enjoy the first light of day.
The birds were already singing and the dew was rising. The porch lights were still blazing, and as I made my way towards the sliding glass door to go in and hit the switch to shut them off, I stopped. Because this is what I saw..... 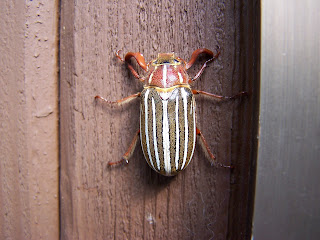 He is two inches long and his little black beady eyes were looking right at me. It turns out that he is a Polyphylla decemlineata.
Say that three times fast!
In other words.... a Ten-Lined June Beetle.
The guide book says he eats conifers. Plenty of those around! They live 3-4 years! And when the adult is handled, they make a sound like a child's cry!
I didn't feel like testing that theory!
( If you click on the pictures, you can enlarge them to see the intricate details.) 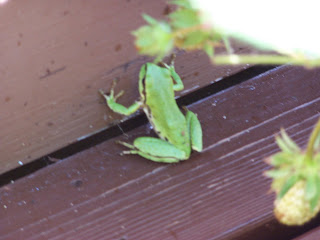 After seeing that little bugger, I decided to have a look around to see if there were more! Instead, I found this little guy hiding behind my strawberry pots. He is a Green Tree Frog. No doubt he was having some happy hunting under the porch lights. I have heard these tiny frogs croaking back and forth to one another in the Spring and Fall evenings. They like to hide in damp places during the day, like my potted plants! 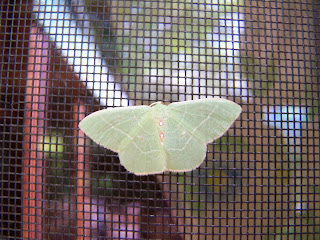 Then I became curious about what else I might find! So I started really looking around. This beautiful pale green moth was clinging to my screen door under the bedroom porch light.
It is a Nemoria darwiniata. They eat Willow and California Lilac, among other shrubs and are attracted to lights at night. 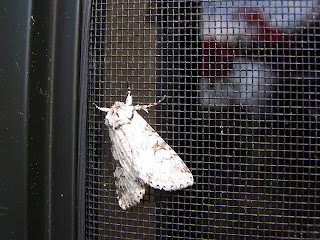 This pretty speckled moth is an Acronicta hesperida, part of the 'Noctuid Moth' family. They consist of 1/3 of all described moths in North America. They eat Alder trees. Plenty of food for them here! 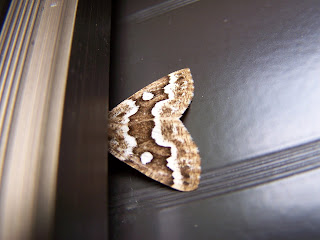 This amazing beauty is called a Catocala aholibah. (Who comes up with these names?) He is trying to hide in the door frame. I love his white spots and beautiful pattern. They eat oak trees. My neighbor has a couple of those. 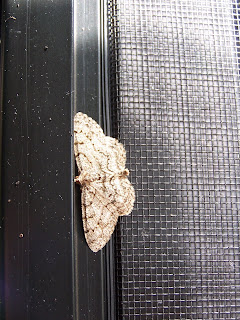 This beautifully patterned moth is a Spargania magnoliata. It is from the same family as the pale green moth; called Geometer Moths. They can be easily recognized by their habit, when at rest, of spreading out their wings. The larvae are the little 'inch worms' that you see 'inching' along by drawing up the center of their bodies.
This particular moth dines on Fireweed, which are just now starting to bloom. 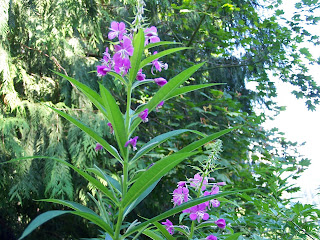 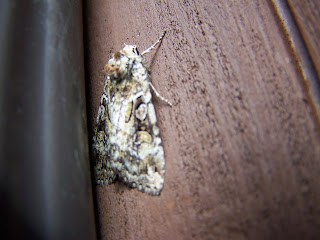 This intricately patterned fellow is called Syngrapha alias. He dines on Sitka and other spruce trees. ( I have a couple of them growing here; they have lovely pale blue tipped branches and small golden cones. 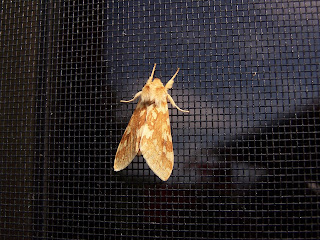 This colorful orange and white moth with the furry mane is called a Lophocampa maculata, or in other words a 'Yellow-Spotted Tiger Moth'.
These are common and eat broad leaf trees. The hairy orange with black end catepillars are commonly found crossing the road in the fall, looking for shelter. 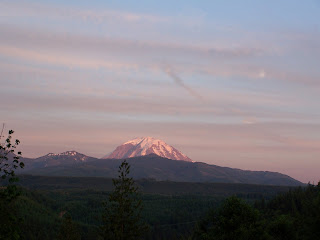 Well, the sun is up now and it is time to start the day. I hope this inspires you to take a closer look at what is really going on around your own porch light at night! You might be amazed!
Posted by Karen @ Beatrice Euphemie at 1:21 PM