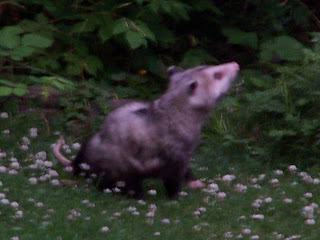 Yesterday I saw a Momma Bear and her baby. They were about 30 feet from my house, over by the compost pile. (I don't put food scraps in it anymore, since I saw the bear last year). The dog, Whitey Bear, had started barking hysterically and flinging himself at the front door to get my attention. When I opened the door, both dogs, Whitey, and Little Bear, ran towards the trail leading to the compost pile. Curious, I peeked over the small fence separating my little side yard with the woods. And there she was, neck outstretched, looking at me warily while her cub climbed the large cedar tree. I had my camera around my neck, but didn't dare stay to take a picture. You don't interfere with a Mother Bear.
I wasn't sure if there was more than one cub. I didn't stick around to find out. I called the dogs, put Little Bear in her kennel and brought Whitey Bear inside. Then I remembered the bird feeder. I had to go out and retrieve it, as I was sure that was the attraction. It was near where I saw Her, but a fence was separating us. So I walked out with my bear spray, talking loudly, with Whitey Bear by my side.....'Hey Bear, Yo Bear, Here I am, Bear'. I quickly unhooked the feeder from the tree and brought it inside. I won't be feeding the birds for the rest of the season.
The cub was very small, the size of a 4 month old Husky. Momma would be very protective. Now I am wary of going outside, but I am cautious and the dogs are alert. They continuously check the air for a scent. 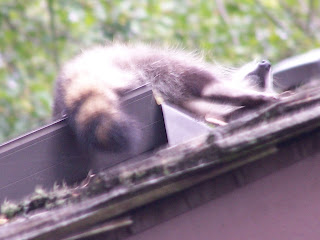 I am used to living with the wild things. One year we had a raccoon that came to stay. This was before we got Whitey Bear, who makes it his mission to round up any and all raccoons that think of stopping by.
At the time I had my old dog Twiggy along with Little Bear. Twiggy was getting on in years, and her eyesight and hearing were not too good. Little Bear never thought chasing raccoons was a worthy endeavor. She is more the Bear and Cougar type.
Anyway, this little guy decided to take up residence. Here he is, lounging on my roof by the skylight. We would find him peering in, waiting for us to feed the cats. 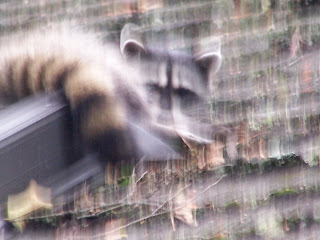 Ooops! I woke him up. His eyesight is a little blurry! Do I have a treat? 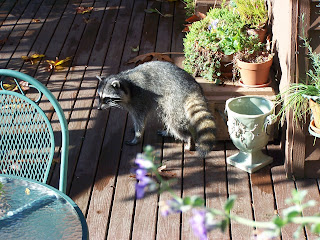 I think I will climb down and wait!
He, turned out to be a 'she' and rewarded us with 4 little babies that year. I have never seen anything quite as cute in my life. She would stop off at the bird feeder, then come up on the deck with her babies tumbling all around her, and clean out the pet dish. I have to admit, I kept that pet dish full for her and those little darlings.
But once we found Whitey, she quickly moved on. By then the babies were grown. 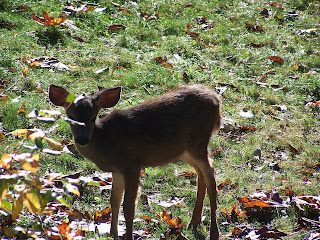 This is 'Deer Baby'. She turned up late one summer day. She was not the least bit afraid of me, the dogs, or anything else. I was very worried. She was sweet as can be and every day when I would add my veggie peelings to the compost pile, she would follow me to browse the offerings. Again, I admit, I would leave her carrots and apples. She ate all of my flowers, decimated my roses, and grazed on my lawn.
I suspected that maybe, she was the sad result of a dead Mother. Just when I was starting to look up wildlife agencies, we had a fierce Autumn storm. High winds, cold, bitter temperatures, pelting rain for days. When it was over, Deer Baby was nowhere to be found.
That week we were visited by an extremely large brown bear who Hubby and I scared off with pan lids clanging together. I suspect that he was the end of my sweet little Deer Baby.
Nature is Harsh. 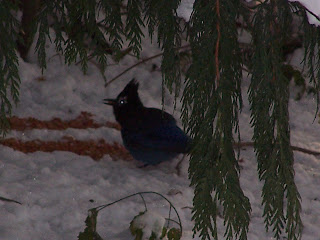 This little guy was a regular to my bird feeder for 4 winters in a row. If you look closely, you can see that he has a white ring around his eyes. My camera couldn't show how bright that ring was. He came in a little flock of non-resident Stellar Jays only during the winter months. My resident Jays protested loudly when this uninvited flock would arrive. This white ring was very unusual and I have never seen markings like that since. 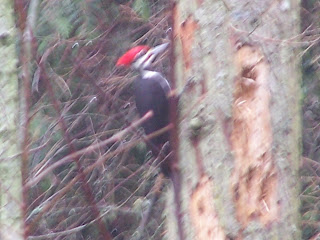 This is a Pileated Woodpecker. I am sorry the picture is so blurry. I had to take the shot from quite a distance, as he is very shy. He is the size of a crow, with a massive bill. I always know when one of these magnificent woodpeckers is around when I hear loud drumming. Hubby and I always leave the dead trees standing, just for the woodpeckers. 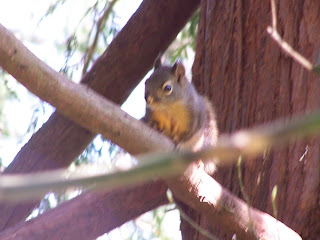 We have three kinds of squirrels here. This guy is a Douglas Squirrel. I suspect he was named after the Douglas Fir trees we have here. We also have the larger Gray Squirrel. Sometimes I see hybrids of the two. We also have Flying Squirrels. They are small with large liquid black eyes. I saved one from my cat last summer and he climbed onto the window sill and sat there terrified. I wish I took a picture. He was gone the next day, as he was not injured, thank goodness.
Of course we have the larger predators, too; the coyotes, the bears and the cougars. We also have bob cat.
I have had two encounters with the big cat; Cougar. The first one happened years ago. It was 3 a.m. and my dogs, Petey and Heidi would not stop barking. My small children were sound asleep, as was my exhausted husband, so I went out on the front porch to quiet the dogs. They came right over to me, smiling and wagging their tails while I scratched behind their ears. Then they pricked up their ears and looked intently towards the side yard. I followed their gaze and there, standing on a freshly dropped load of firewood under a big Hemlock tree, was a very large cougar. She had her hind end at the top of the pile and her long graceful body draped the length of the pile, down to the ground, and she was staring right at me, not more than 25 feet away. A very curious thing happened. Part of me left my body and went inside the house. It took the rest of me a few moments to follow, the dogs pushing their way inside along with me.
That same year, I had another encounter with what must have been her yearling kitten. Again, the dogs were barking early one morning, daylight this time. They were 'yipping', which meant they had something 'tree'd'. It was summer vacation for the kids, and they were all asleep upstairs still, and I didn't want to wake them if at all possible. (I loved peaceful mornings to myself) So, I went outside to see what the dogs had in the tree. I figured it was a raccoon or something. It was that very same large Hemlock tree. This tree had many long low branches. I looked up and saw what looked like a big fluffy kitty, 15 feet up, hunched on the lowest branch. I thought it might have been a neighbors' cat. I could only see the undersides of his very fluffy belly. So I started sympathetically talking to the poor thing, asking if those mean doggies had chased him up the tree! That was when the kitty turned his head around to look at me, and I realized it was no neighborhood cat. Then I saw the base of it's tail which had been tucked under him and it was no little house cat tail. This was a cougar! And he looked at me with the same look that my sympathy elicits in my little house cats, a look that said, 'Yes, I am miserable, and please help me!'
I quickly retreated. I brought the dogs in with me. After a while, I looked out and he was gone. 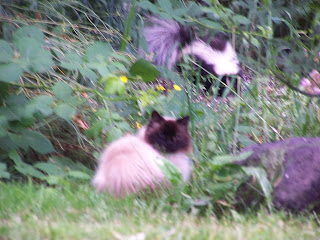 This is Yami. I have published this photo before, but I just had to include it again. Yami was a little Himalayan cat that my daughters found starved and emaciated one bitterly wet and cold December day at the bottom of our steep hill on their way to school. (My older daughter was in High School and was  driving). They had stopped at the stop sign, and Yami ran right out from the woods, as if to say, 'This is my last chance'. It took the poor little thing a whole month to regain enough strength to even walk down the stairs. (We kept her in a bedroom upstairs while she recovered) But after that, Yami ruled the house. She loved anything Stinky, especially stinky shoes and would stick her whole face inside. When she spied this skunk one day, she thought she found her soul mate! She followed that little skunk around all day. I was able to sneak up and take this picture.
Living here at the edge of the forest is always interesting, sometimes frightening, but I wouldn't trade it for anything. I never take it for granted and I always give Nature the respect she deserves. These beautiful wild creatures were here before me and this is their home.
But it never hurts to have a couple of big dogs around!
Posted by Karen @ Beatrice Euphemie at 1:41 PM