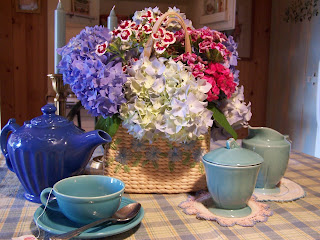 As I sit here waiting for my tea kettle to whistle, so I can make myself a cup of tea to soothe my frazzled nerves, I want to tell you about my morning.
You see, I have been staying up way too late every night reading. I have been reading the most delicious books and they are too good to put down. So I have been burning the midnight oil, and the one o'clock oil and the two o'clock oil.....
The first book was written by Ree Drummond, and was taken from her now famous blog, called 'The Pioneer Woman'. The book is called 'Black Heels to Tractor Wheels', and it is about her unabashedly romantic courtship with the man she married, whom she calls, 'The Marlboro Man'.
The second book was written by Isabel Gillies. She is also an actress, and her book is called, 'Happens Every Day'. It is about her romantic romance with the man she married (a college professor) and her idyllic life in the little college town with him and their two little boys. That is, until a woman named Sylvia comes to teach at the college. Well, you will just have to read it to find out what happens.
Both true stories. 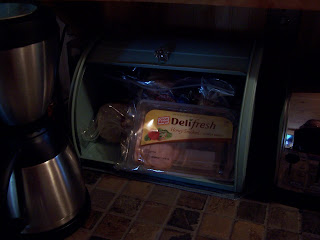 Consequently, I have been over-sleeping every morning and rushing up, bleary eyed to help Hubby out the door for work.
So when I started packing his lunch ( I spoil Hubby, I know), I couldn't find the nearly full package of sliced turkey I knew I had just bought over the weekend. I searched the whole refrigerator. I had dark, accusing thoughts towards Hubby. (That he must have woke up in the middle of the night and helped himself and the pets to the turkey, or he had thrown it out because he was sick of turkey; things like that.)
I had to tell him to go out to lunch. 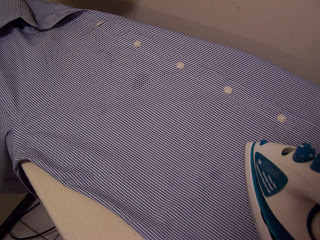 Then I started ironing Hubby some clothes for the day. (yea, yea, I know, spoiled rotten). I was nearly done with his favorite blue pinstripe when I turned the last panel over and realized the whole front was stained. Sigh..... I had to start over. So after stain treating his shirt, I grabbed another one from his closet and ironed that up. When Hubby came in to get dressed, he told me that was the shirt he wore yesterday. (Hubby, why did you hang it back up? Because it wasn't dirty, he says! Sigh....) That goes to show you how bleary eyed I have been not to notice.
So out the door he went, no lunch, and the same shirt as yesterday.
And guess where I found the turkey?
In the bread box!  I must have put it there the morning before when I had packed his lunch.  I usually don't have toast in the morning, but this morning I had a craving. And when I opened up the bread box, low and behold, there was the turkey!
I think I need to get to bed earlier. 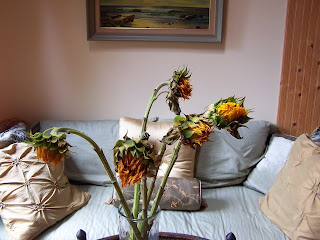 My whole week has been going along this way.
I went shopping on Saturday and had one important thing to buy. A birthday card and gift for my daughter J's significant other. Did I remember? No. But I did buy myself these beautiful sunflowers. Thinking they would open up. I thought they were the freshest ones because they hadn't even opened yet. Yea. They never opened. Aren't they pretty? Not! 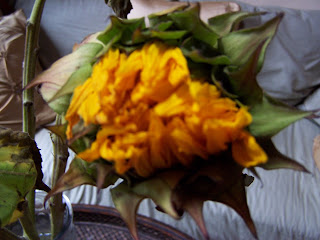 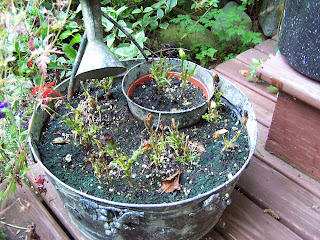 And this is the sad remains of Hubby's little shed garden that I so lovingly potted up this Spring with bright sunny Marigolds. Who knew slugs love Marigolds? I even put out slug bait. The organic kind. They ate that, too. I don't think it works. Every one of the little pots look like this. 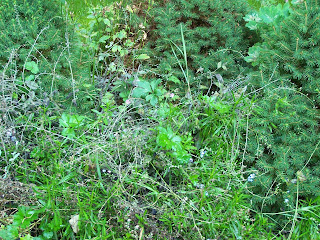 And seeing I am on a roll, this is my Mother's commemorative garden. Not too pretty is it? The Forget Me Not's are done blooming and have left a big weedy mess.
The weekend was the same.
The 'kids' all went camping. The campground was on the route that goes past our little town. Of course they stopped by. Which I loved. But....
I had to pet sit daughter J's Dachshunds and the weekend was chaotic with pets, impromptu visits, and my son G and fiancee' E, sorting through all the family pictures to use in the upcoming wedding. There were photos scattered everywhere, food preparations, people running in and out. And then I accidently left the door to the bedroom open and the hunt was on. Two baying Dachshunds, racing after one terrified Siamese, Ling-Ling. Crash, smash, scratch and flee! Ling-Ling raced out the open sliding door on two wheels and up and over the deck railing.
But one of the dogs made it out the front door when someone walked through and found the cat, and the chase was on once more. She sought refuge in my flower box outside my bedroom window. (Bye, bye sweet little flowers) The other dog spied her through the window. I never heard so much commotion in my life. By the time I rescued poor little Ling-Ling, she was lying flat, eyes as big as saucers, and firmly attached to the window box.
Both of our nerves were shattered.
I still hadn't recovered and I stayed up too late, and now Hubby is gone to work in a dirty shirt and no lunch. My flowers are flattened and eaten or gone to seed. I look like a wreck. 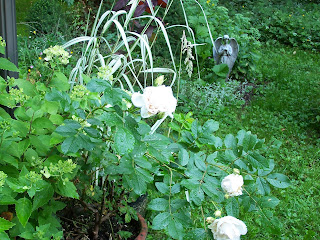 But the white roses I bought for my Mother's garden are starting to bloom. 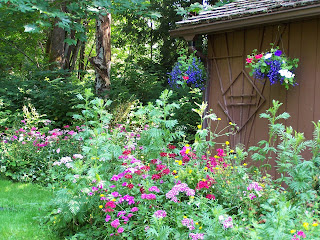 And the Sweet William up by Hubby's shed are putting on quite a show. (Just don't look at the dead ones out in front) 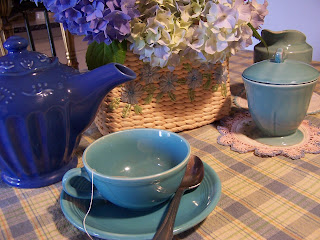 Well, now I hear my tea kettle whistle. The dachshunds have gone home, the cat has recovered, and the sun is shining. I think I will go out today and replant my pots, and do some weeding. Then I will cook up some chicken to make Hubby some chicken salad for his lunch tomorrow. All is right with the world once again.
Mmmm.....What's next on my reading list for tonight?
Posted by Karen @ Beatrice Euphemie at 2:58 PM

Email ThisBlogThis!Share to TwitterShare to FacebookShare to Pinterest
Labels: Life