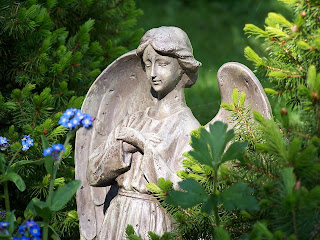 'Silently, one by one, in the infinite meadows of heaven, blossomed the lovely stars, the forget-me-nots of the Angels'
Henry Wadsworth Longfellow, 'Evangeline'
Lately I have been thinking about Angels. I am sure it has something to do with my Mother passing away. Towards the end of her life, she too, became fascinated with Angels and had started a little collection of them to surround herself with. 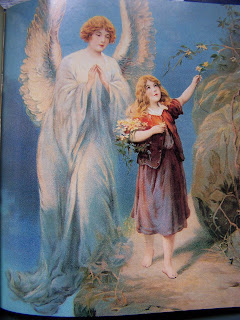 'The Guardian Angels of life fly so high as to be beyond our sight, but they are always looking down upon us'
Jean Paul Richter
I have always been fascinated with the idea of Angels, also. Humanity as a whole has entertained the idea through-out history. Great works of art have been created depicting these ephemeral winged beings. 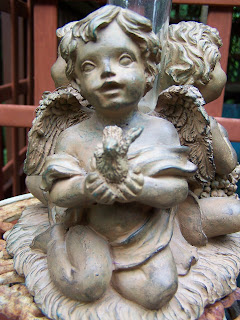 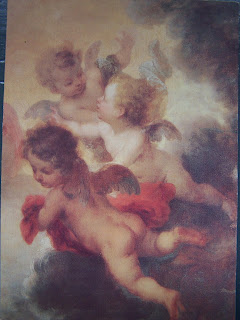 'Every man contemplates an Angel in his future self'
Ralph Waldo Emerson
When I was a young bride,  I took my dog Jasmine, for a walk. We had just moved to the area in a far away state from where I grew up, and I didn't know it well. Across the street was a large open field, with railroad tracks running along one side, and a highway along the other. I chose to follow the tracks and curiously decided to explore the other side of a bridge. As I started to walk under this bridge with my dog off his leash, a voice that was not my own thoughts, spoke to me. I was told that 'curiosity killed the cat'.
I dismissed this as an irrational thought and kept on walking. As soon as I reached the other side, a man appeared from a small wooded area, rapidly walking right for me with a malicious smile and said, 'Where did you come from?'
I again heard the voice. It told me to 'Swing the chain'. You see, I had a doubled up dog chain in my hand, the leash that I let my dog free from. I started swinging it rapidly back and forth in front of me. The man stopped. The dog started barking. This gave me time to run. I escaped. 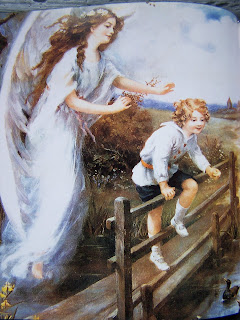 'If trouble hearing Angels song with thine ears, try listening with thy heart'
Terri Giullemets
Sometimes people are inspired to behave in Angelic ways. I am sure that you have all encountered these types of wonderful souls.
When I was in 6th grade, my family moved to another town. I had to attend a new school. The only friend I had was my little neighbor, and she was in a grade below me. I was extremely shy as a child and the thought of starting over and leaving all of my friends behind was very hard on me.
But the first day of my new school, I sat beside this Angelic boy. His name was Arthur. He immediately took me under his wing. He carried my books, he sat with me at lunch, he even lifted my chair to put onto the desk at the end of the day and lifted it down each morning. He gave me new confidence. I had a friend.
But after Christmas Vacation, Arthur was not in his usual seat beside me. For days I waited for him to return. Then the teacher announced one morning that Arthur had died. He had an asthma attack. My only friend was gone.
But his presence remained, his cheerful and happy face, the idea that he was so glad to see me every day gave me confidence that I was a worthy friend. I did go on to make new friends, but it was Arthur's kindness and faith in me that allowed me to shine. 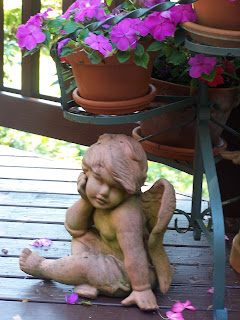 'The wings of Angels are often found on the backs of the least likely people'
Eric Honeycutt
Sometimes people that you know act in Angelic ways that are unexpected. When I was 4 years old, we lived in an old Victorian Home that had been converted to two apartments. We lived in the apartment upstairs. The one downstairs was occupied by an elderly woman. When I played outside, she was always in her window, admonishing me to behave myself and noticing everything I did. Even though I was only 4, I remember not liking this woman very much.
But one day, I was out playing by the side of the house with the water hose. My Mother had given me a lollipop. I was busy in my play and kept the pop in my mouth. And then, the candy top separated from the stick and it got lodged in my throat. I was unable to breathe. I tried to call for my Mother, but nothing came out! The next think I knew, this elderly lady was patting my back furiously, and out flew the pop, dislodged from my throat. This wonderful lady had saved my life!
After that day we became very close and she would come out and play with me sometimes. She was my Angel in disguise. I would not be here today if not for her. 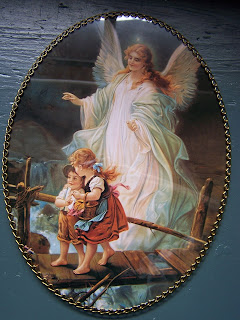 'We are each of us Angels with only one wing, and we can only fly by embracing one another'
Luciano de Crescenzo
Every day we each have a choice. 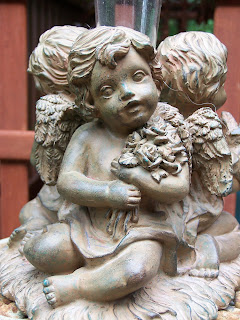 'Don't forget to be kind to strangers. For some who have done this have entertained Angels without realizing it'
Hebrews 13:2
So whether or not you believe in Angels, or the idea of Angels, you can still try to live your life with Angelic Ideals. Sometimes all it takes is a simple act of kindness.
'Every time you hear a bell ring, it means that some Angel's just got his wings'
From the movie, 'It's a Wonderful Life'
Movies about Angels
'City of Angels'- Meg Ryan and Nicholas Cage
Family Movies about Angels:
'The Preacher's Wife' - Denzel Washington and Whitney Houston
'Angels in the Outfield' - Danny Glover, Tony Danza, Christopher Lloyd
'Heaven Can Wait' - Warren Beatty and Julie Christie
'The Heavenly Kid' (this is 1980's vintage with unknown actors, geeky, but good)
'It's a Wonderful Life' - James Stewart and Donna Reed
Family Television series about Angels:
'Highway to Heaven' (1984-1989)
'Touched by an Angel' (1994-2003)
Posted by Karen @ Beatrice Euphemie at 1:41 PM