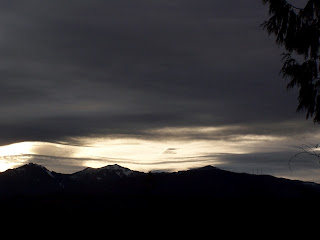 The wind is howling outside my door tonight. The wind chimes are crashing together and debris is hitting the house. It has been a long cold season and I am so anxious for Spring.
On nights like this, it is hard to sleep. There is a little grove of very tall trees right next to my bedroom. One is a Hemlock that must be at least 70 feet tall. The wind blows it's long branches every which way, snapping cones and little branches that land on my deck with a thump. Hubby sleeps like a baby, but I lie there thinking.
My dog Whitey slides through his pet door in the kitchen and walks to the glass door of my bedroom from the deck and stares in through the small opening at the bottom of the closed curtains. He is nervous. He hates the wind. He is telling me that he would rather I come out into the living room and keep him company. 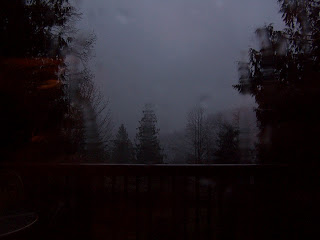 So I bank up the fire and put on the tea kettle and settle down with a good book with him lying at my feet. He finally settles down and soon he is snoring, the presence of my companionship to take away his fears.
His loyal presence giving me the same comfortable feeling.
Because outside, just beyond the thin walls and glass, lie miles upon miles of wilderness. If I think about it too long, I can really feel small and alone. 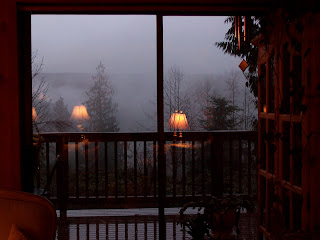 When I look out my windows at night, there are no lights except the reflected lights from my own lamps upon the glass.
We do have neighbors, with only one that is close. We are on the edge of a vast forest surrounding Mt. Rainier.
One night years ago, on a similar wild night, my dogs were barking loudly and woke me up at 3 a.m. Because my children were sound asleep, and my husband had to get up at 5 a.m., I took it upon myself to investigate without waking him up.
I stepped out onto my front porch with my dogs beside me. My presence temporarily distracted them as they snuggled beside me so I would tickle their ears. But then, both together stood up and with ears pricked and eyes facing the same direction, they growled deep in their throats.
I turned to look in the same direction, and there before me, only 30 feet away, was an incredible sight. A very large cougar stood on the wood pile, it's back end on top, it's front end stretched downward the full length of the pile, nearly 9 feet long from the tip of it's tail to it's nose. And it was looking right at me.
A very curious thing happened. My fear was so complete and so instinctual, that I felt myself separate and part of me went through the door before my physical body followed behind, dogs hot on my tail. 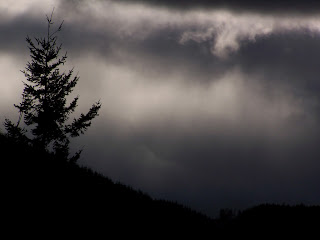 Sometimes I wonder at how brave we were to come here, clear raw land, and build a house on the edge of the wild.
We were young and adventurous. We were strong and energetic. We were naive and innocent. We had no idea.
It has been quite an adventure. One that keeps on surprising us, enthralling us, and yes, scaring the wits out of us.
We have seen things and heard things go bump in the night. There are lions and tigers and bears, oh my! 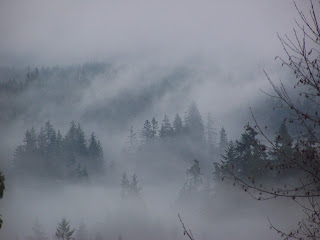 There were rumors when we first came here, of a white coyote. One night I was driving home late after a long day in the city, selling crafts at a show. I was on the last leg of my journey, slowing down before turning the corner at the base of our little mountain road. And there in my headlights I saw this apparition. It was the white coyote running along the side of the road. There was no escape for him, as he was up against a little pasture fence, and so he turned his head sideways, flattened his ears, hunched his back, tucked in his tail and hopped at me with his teeth bared, like cats sometimes do at play.
It absolutely made my blood run cold.
But at the same time, it was a thrilling sight. An albino coyote! And I had seen it!
I was grateful to be inside my warm and safe vehicle with plenty of gas. 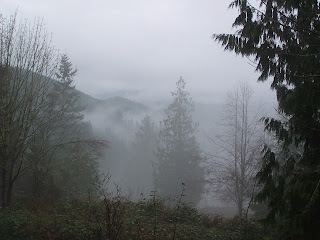 But there was this time once, after my children boarded their school bus and I turned my car to go back up the little mountain, that my car could not negotiate the ice on the hill that I had so easily come down from. I tried and tried to drive it up the steep road, to no avail. I had to abandon it and walk. It was eerily quiet that cold and icy morning and I was all alone. The only neighbors were far up the road. It was too slippery for me to walk very fast and the climb was so steep. As I carefully made my way, I heard a very large crashing through the woods along the hill. I couldn't run and was paralyzed in fear. The crashing was coming closer and I could tell it was a very large animal.
As I held my breath and prayed, soon a large brown head appeared. Then it let out a long mournful 'Moooooooooo'. It was a steer! And gratefully, it was held back by a 3 strand barbed wire fence.
He accompanied me up the steep incline from his side of the fence as I kept up a steady conversation with him, and then at the top I said goodbye and he joined his friends and I made a promise to myself that I would immediately get studded snow tires so I never had to walk up that mountain alone again. 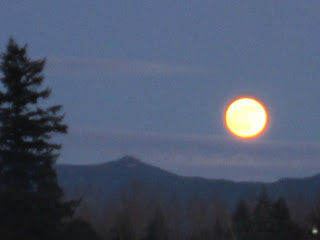 I have learned self reliance, courage, and respect for nature. I have so much respect for man-kind, to have survived and thrived for thousands of years despite the harshness of nature and the elements. We have not survived for this long without having a reverence and respect for our life supporting planet. It is so important at this time of our journey to remember to continue to respect her. Vote for environmentally responsible politicians, recycle, don't use harmful chemicals, be kind to our fellow earthlings, the creatures who share our home, be responsible in all aspects of caring, for without this life giving planet, we would cease to exist.
﻿
Posted by Karen @ Beatrice Euphemie at 4:35 AM