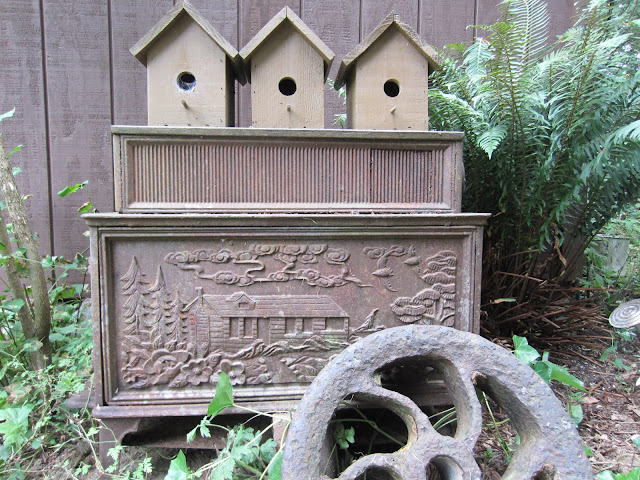 Over the long Labor Day weekend, we used the opportunity to get another home improvement project started. Not that we don't already have half a dozen projects already started.....It's been one of those summers. Delays. Bad Weather. Lots of life stuff going on. No trust fund.You know how it is. 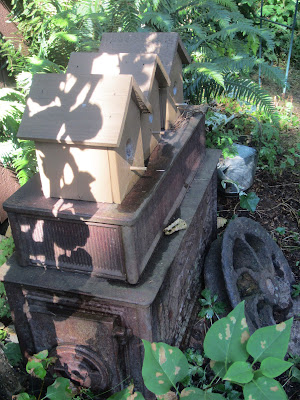 But one project we have to do whether we feel like it or not every year, is stain the deck. Now you might wonder why I am showing you photos of bird houses, an old wood stove and a coal cart wheel. But I'll get to that... 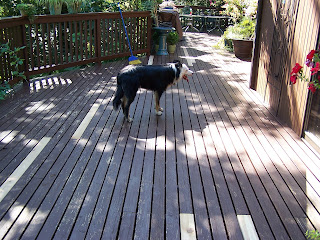 Back to the deck. This is Champ. He is one of the reasons why we have to stain the deck every year. Little feet with claws.
Plus, the deck is on the 'weather' side of the house.
Every time we have to stain it, Hubby has to replace any weak boards and then pressure wash it.
This takes some time.
So I had to find something to do while pup sitting. 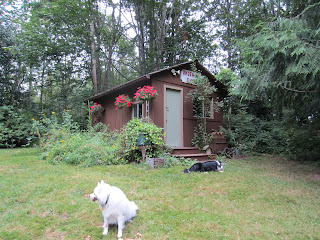 These two are terrified of the sounds of hammering and pressure washing. So while Hubby worked hard, I snuck up to his Work Shed to do a little sprucing up around it while he was otherwise occupied, far enough away from the 'terrifying' sounds so these two could relax.
Now, this is Hubby's little domain - the Work Shed. He doesn't want me 'fussing it all up with flowers and all that'. But I can't help myself. He tolerates that, but he doesn't like anything too 'girly'. So I have found a compromise. 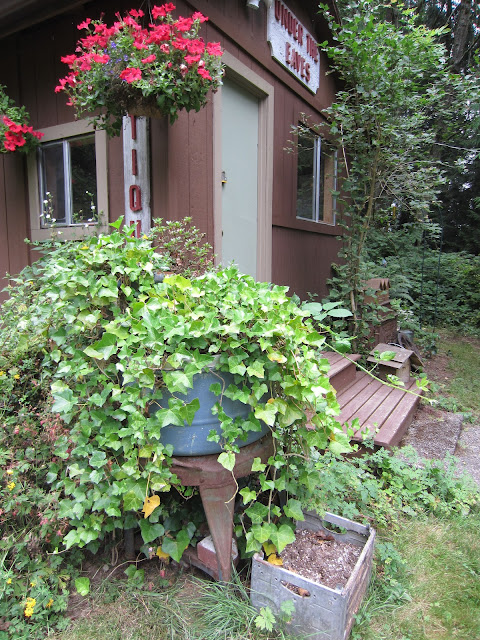 Rust.
Yes, that's right. Hubby loves anything rusty. Who knew? So I have been sneaking things into his little world for quite some time now and so far he hasn't objected. Sometimes he nods his head at me and says something like, 'Looks good'.
So that has encouraged me.
First I filled this old washing machine with some very exuberant ivy a few years ago.
The old milk crate in front ,which is full of spring daffodils, I slipped in last fall. 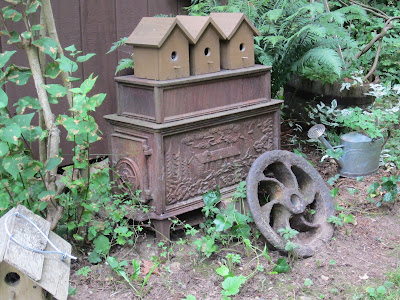 Hubby and my (then teenage) son's found this old wood stove at an abandoned home site in the now defunct coal mining town down by the river. They also found this old coal cart wheel lodged in the river bank where there was once a bridge.
They came home with these 'treasures' and put them in front of the Work Shed.
Look at all that beautiful rust! 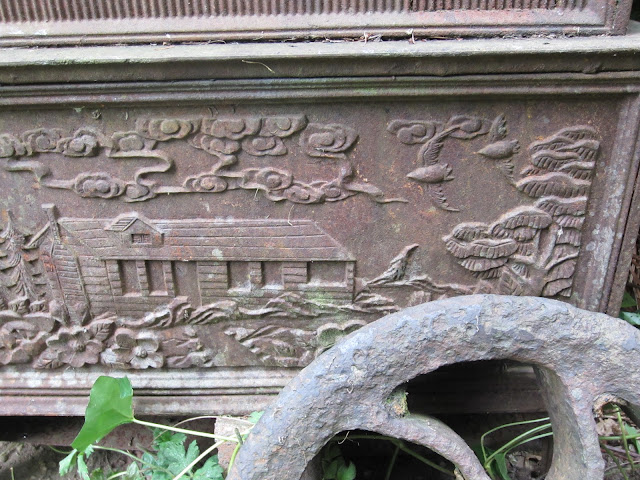 I love the embossed scene of this cabin in the woods with the smoke curling out of the chimney. 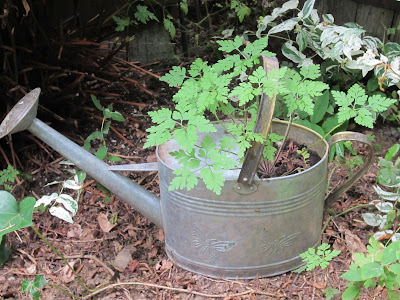 I kind of left this leaky watering can up here to see if Ol' Blue Eyes would move it, but he hasn't, and now this pretty little wildflower is growing in it (ooooops! Did I leave soil in that watering can?)
There are no flowers yet, but next spring there will be tiny pink ones. 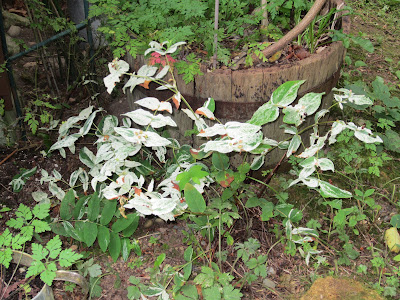 This old half barrel ended up here a long time ago, so I happened to have a spare wisteria vine hanging around and now it is climbing onto the front of the shed. He hasn't said anything yet. I think he likes it. The whiskey barrel has lots of rust on the bands.
The pale leaves are variegated St. John's Wort. They have very discreet yellow flowers. 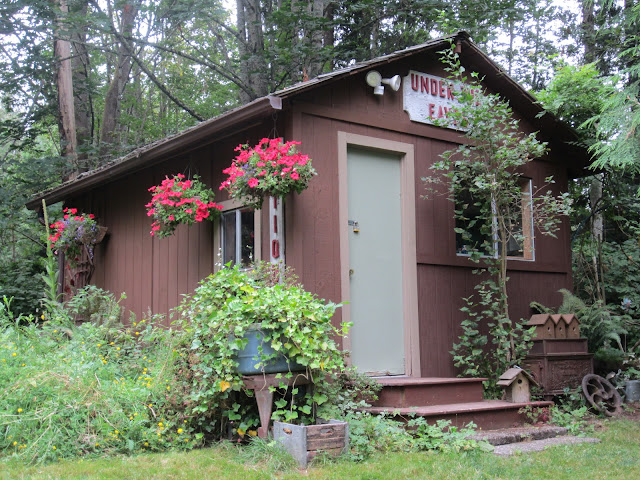 He did agree to hang these signs he made for a little antique shop that I once owned. I closed the shop but kept the signs. 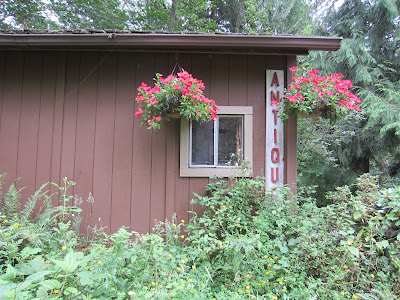 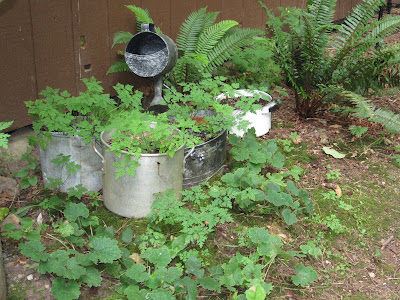 So being inspired to add to all the rust and 'old stuff', I had put these unused old cooking kettles and tubs on the shady side of the Work Shed to use as planters. I had forgotten about them, but when I started clearing away old blackberry vines and weeds, I found a little 'garden' growing! Two little ferns had sprung up, and some wildflowers had seeded themselves into the old kettles filled with soil. Moss had formed a groundcover. 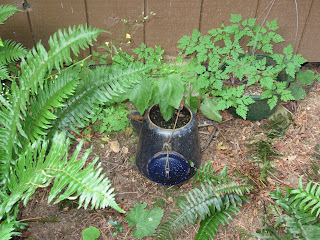 There was even a hanging basket all 'planted' with wildflowers ready to hang! 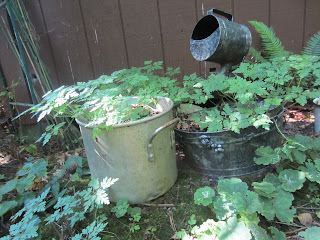 All I had to do was tidy things up a bit.
He won't even notice that all that rust has pretty little flowers this Spring. 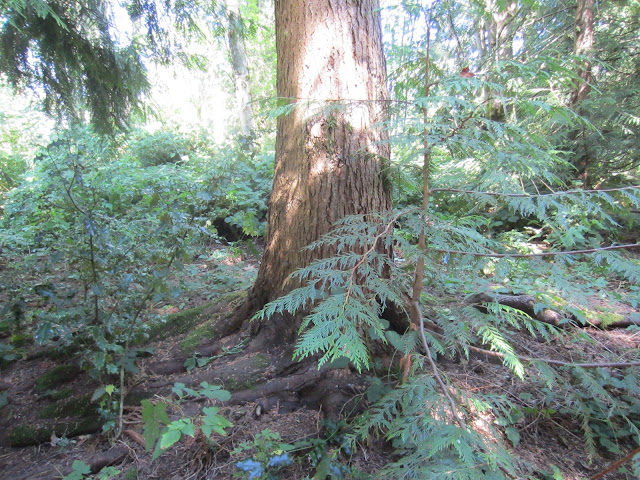 So while he worked away at cleaning and repairing the deck, I tidied up the woodlands around his Work Shed. 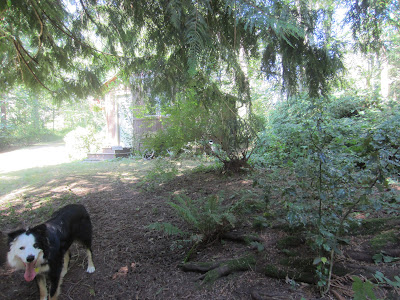 With one of my little 'helpers'.
﻿ 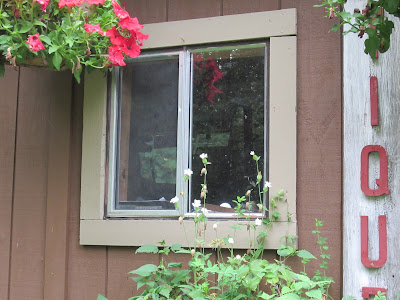 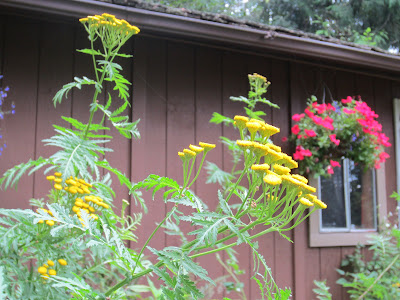 I like a man of few words.
xx
Posted by Karen @ Beatrice Euphemie at 8:45 PM