Going To The Dogs 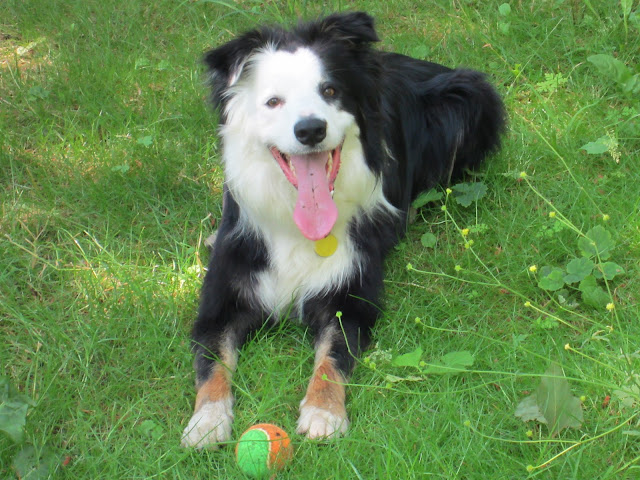 As you might remember, not too long ago I adopted this pretty boy as a companion for Whitey and I after our beloved Little Bear passed.
Whitey was so depressed that he wouldn't go outside. He gained weight. He didn't even bother to bury his bones any more.
Little Bear wasn't there to dig them back up.
It was a favorite game. 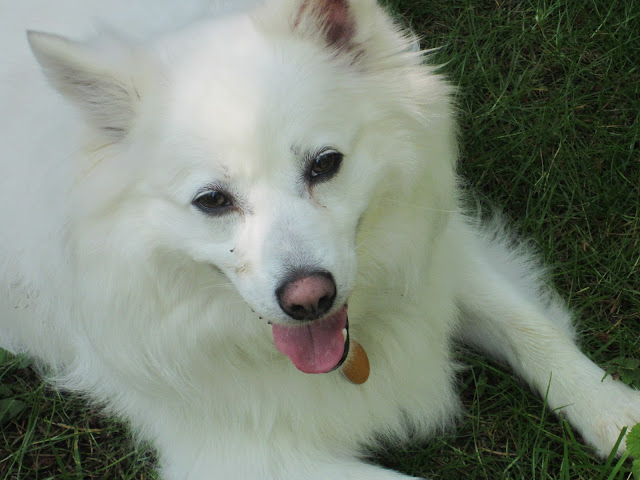 His sad eyes told me that I needed to find him a companion.
I, too missed Little Bear's fearless and devoted presence. She calmly stood guard wherever I went, always alert.
One big 'Woof' from her and even bears went running.
I didn't know if I was ready to love another dog. 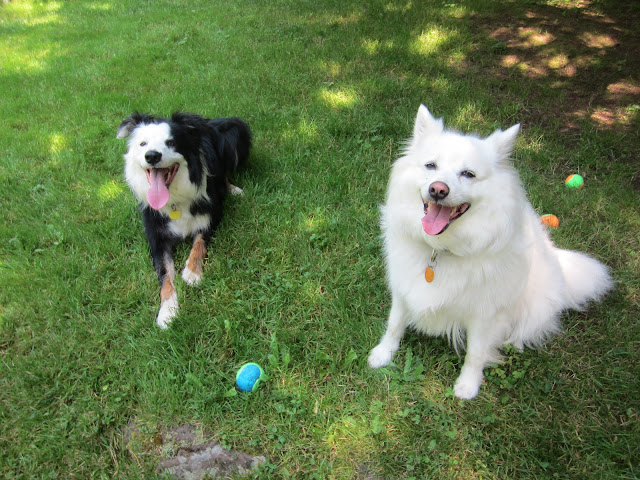 But we have always been a two dog family. It takes two dogs to keep each other company, patrol the property and provide a presence. Not only that, but they are true companions to Hubby and I.
We knew that we had to adopt a rescue dog.
No question.
So, after applying to two organizations, the Border Collie and the American Eskimo Rescue Organizations, we were sent information on Champ. 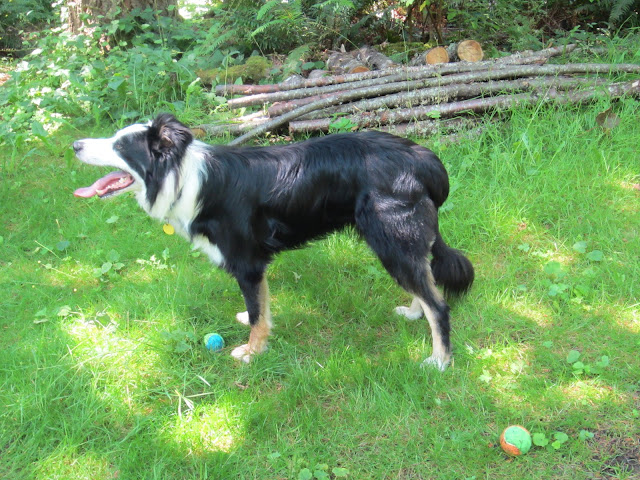 So far his reputation for being a 'challenge' has been very accurate.

He is afraid of loud noises. He becomes destructive if he is left out by himself. But it is the strangest kind of destruction. He tears out plants.

He reacts this way to all of his frustrations. He also starts drooling. And has the strangest habit of licking the floor when he is stressed.

So we have been doing some observations.To see what works. Redirecting his attention helps. Repetition. Talking calmly. Showing him that he can lie down and chew a bone and that he doesn't have to react to loud noises. That he can come over and get scratched behind the ears.

We filter any noise with fans.

We are working on teaching him self-soothing methods of coping.

That everything doesn't have to have his attention. 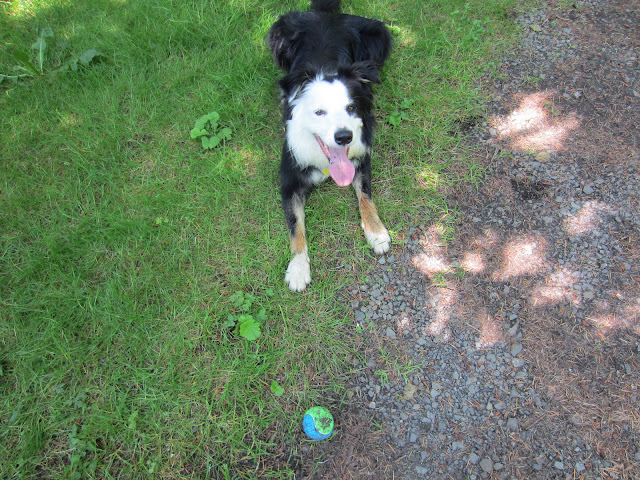 That he doesn't have to worry.

He was teased. With everything. Flashlights, aluminum foil, plastic bags, sticks, water from the hose, the broom. He goes after all of those things like a hound to a fox.

Then after being teased, he was confined because of his destruction. Necessarily.

But already he is learning. I can now water my plants without him lunging at the hose. I just simply redirect his attention. 'Go get the ball, Champ'. Over and over, 'Go get the ball.' I bought a toy that looks like a soccer ball. I can kick it. Which leaves my hands free. He is so smart. He knows what I am saying. He loves to fetch the ball. He is quite good at it. Right in mid-air.

I don't allow him to bite at the broom. I stop. I say, 'No'. Then I start sweeping and when he lunges at the broom, I tell him to 'Go get the ball'.

Over and over he is learning.

How to be a normal dog. 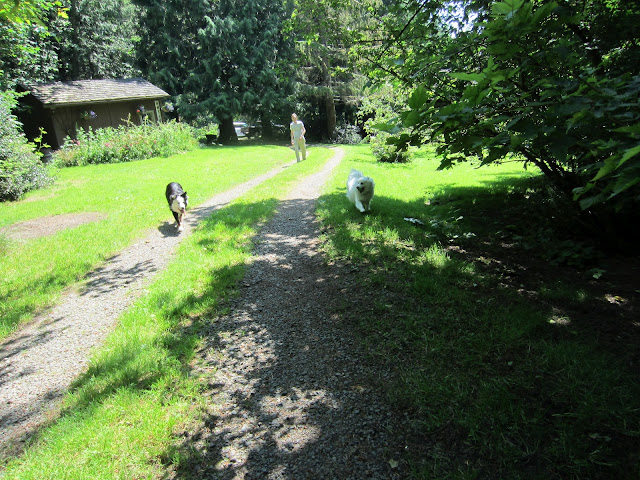 Today we have had thunder and Hubby has been hammering.

This has been going on for 3 days.

The first two days were very trying for me.

He drooled so much when I brought him inside that I had to confine him to the kitchen and stay with him, following him around with a mop and wet towel.

And handing him his ball. 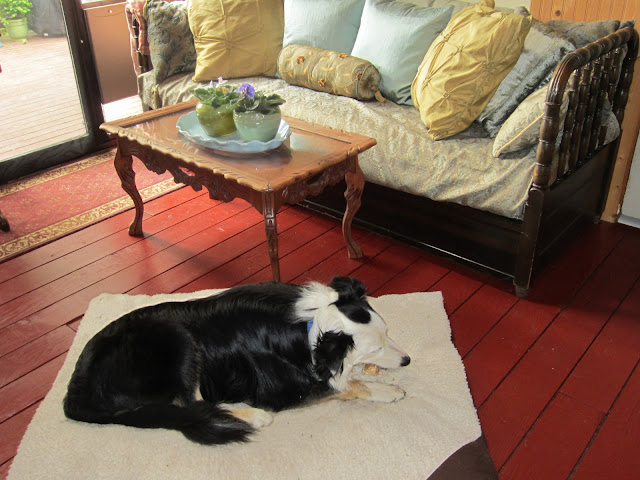 A breakthrough! The once frantic, drooling, plant ripping hound has turned into a happy, fairly normal dog! Despite the thunder. Despite the hammering in the next room.

It just took a whole lot of patience, a lot of reassurance, observation, and love.

And I'm sure there will be plenty of set backs. 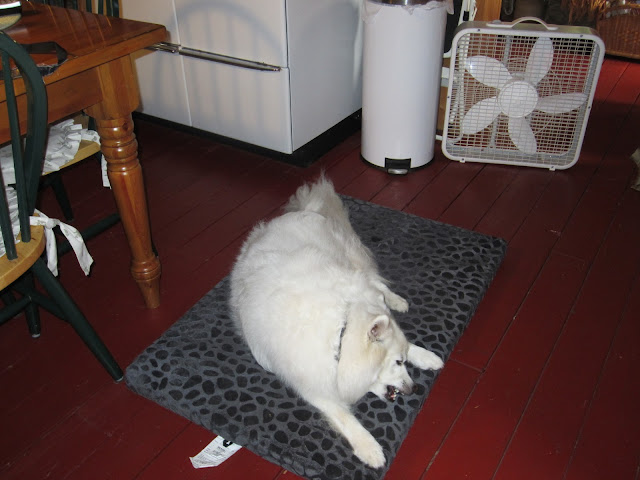 And the example of his little pal, Whitey, who showed him that it is far more fun to calmly chew a bone than run around wasting all of that energy on chasing shadows and sounds. 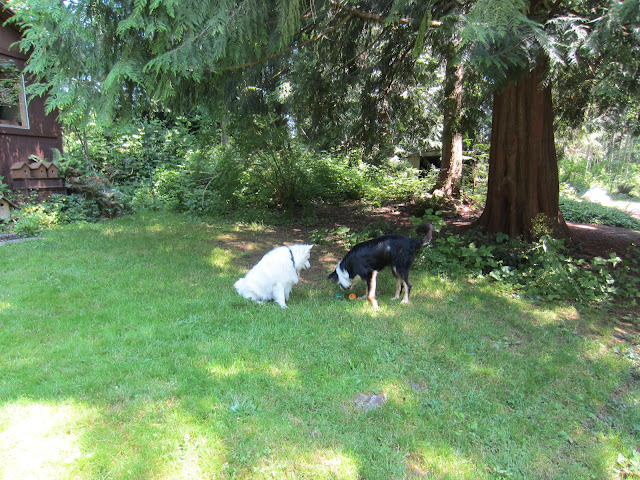 And yes, you can teach an older dog new tricks.

One day at a time.
Posted by Karen @ Beatrice Euphemie at 4:52 PM

Email ThisBlogThis!Share to TwitterShare to FacebookShare to Pinterest
Labels: Pets