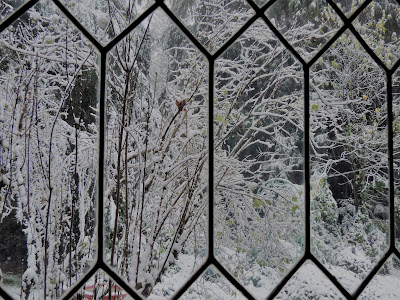 Hello, Dear Friends, our beautiful autumn leaves
were sugar frosted over the weekend - the
earliest snowfall in over 40 years. 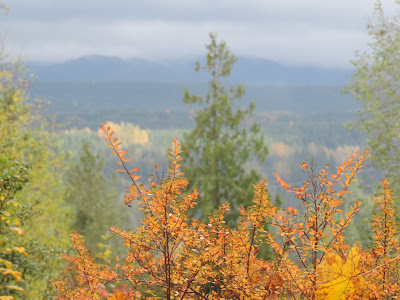 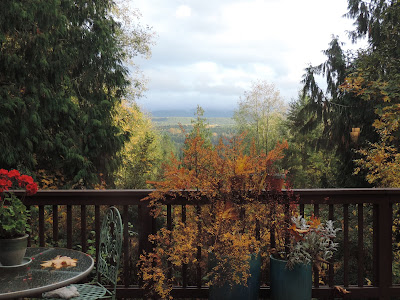 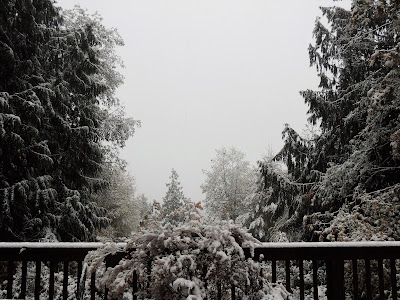 From technicolor to black and white! 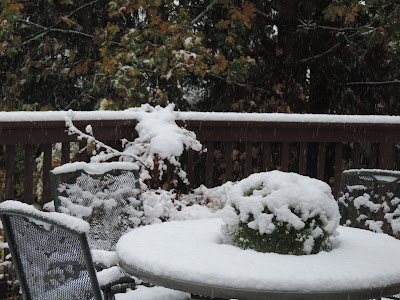 It wasn't a major storm, just a dusting of snow from
cold air out of Canada, mixed with moisture
off the Pacific ocean. 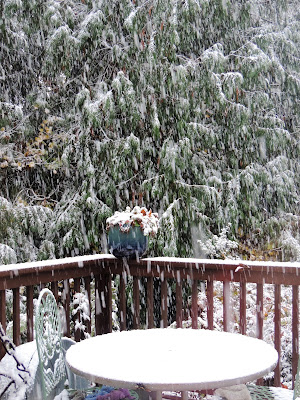 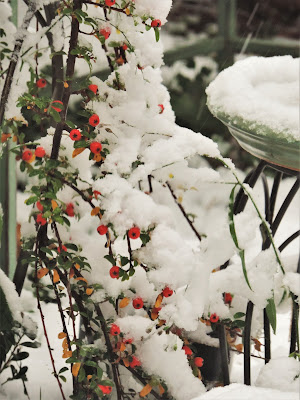 Luckily we didn't have to drive,
but if we did, we were ready with studded
snow tires installed on my 4 wheel drive truck.

There is no way to drive up our steep road
without them in the winter.

Trust me, I've had to walk up that road,
and it is not a fun experience.
Once, many years ago,
I drove down to drop the kids at the school-bus
as it started to snow,
but I couldn't drive back up.

It was eerily quiet, the way it gets when there is
snowfall, and I was totally alone,
as this was before there were neighbors.....

I started walking up the slippery road,
and was about half-way up,
when I heard something very large come
crashing through the forest towards me.

My heart nearly stopped, and I could not run,
as there was no time and the road was much
too slippery.

So I braced myself, and just when I thought
this might be my very last moment,
I heard a very loud, 'Moooooooo'!

It was a friendly steer!
He popped his head out of the trees
and I realized there was a barbed wire fence
that I never noticed before, holding him back.

I could have kissed him,
I was so relieved, as I live with
cougars, bears and massive bull elk.

He followed my progress up the steep road
from his side of the fence, and I gave him
a good scratch once I got to the top,
but made a vow to get proper traction tires
as soon as possible :) 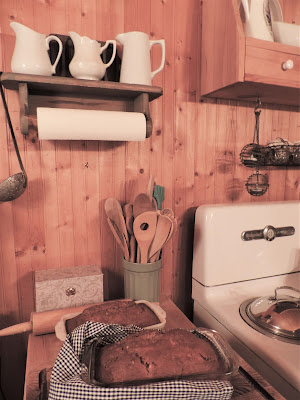 But we had no place we needed to be
except home, on this weekend of our first snow,
so we made ourselves as cozy as we could. 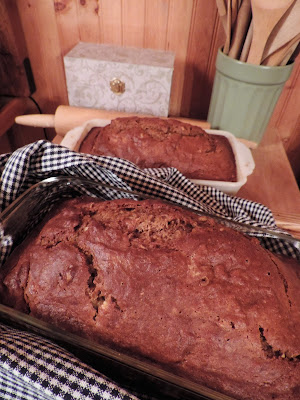 (I made it with half whole-wheat flour this time,
and it tastes just as moist and delicious) 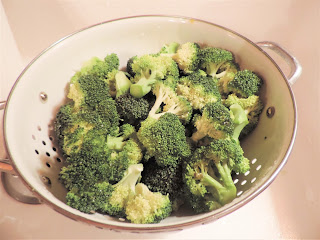 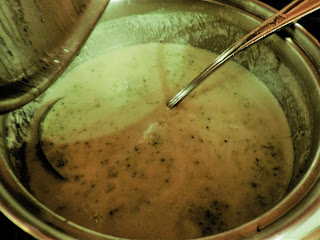 And made a Broccoli-Cheese Soup,
while Ramblin' Man kept the wood-box
full and the fire glowing. 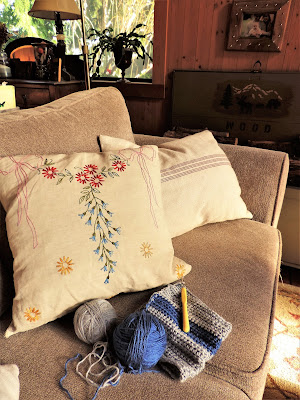 In between, I sat by the fire and crocheted
while Ramblin' Man read the Sunday paper. 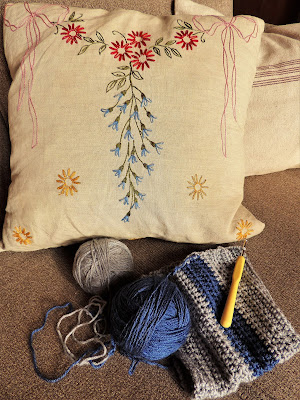 I have a few of these to make and will share
them when I am done.

My feather pillow is hand-embroidered linen
and is the perfect, soft back-rest :) 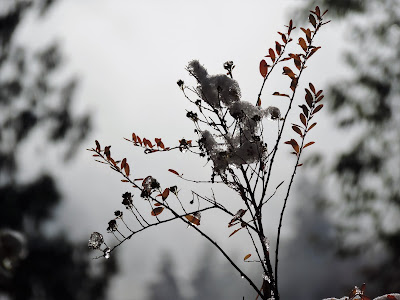 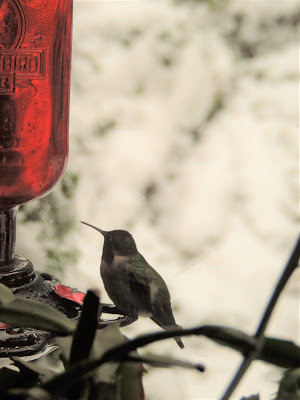 Nature is beautiful, but can make life
difficult and I feel so bad for the little birds
living in the elements.

This little Anna's hummingbird is a year-round
resident here in Washington State, surprisingly,
I know, but I have done some research after
my first time seeing them come to empty feeders
in winter-time.

So I  keep the feeders full and worry all winter,
but they seem hardy and unaffected.
I even bought a heated feeder for sub-freezing temperatures,
but thankfully we have rather mild winters
despite the occasional snowfalls.

They also survive on sap (and the insects that are attracted to it)
that flows from the holes
drilled by our Red-Breasted Sapsucker.

These are the most common sapsuckers in
Western Washington State, and I have photographed
them in my apple trees, eating the pulp, too. 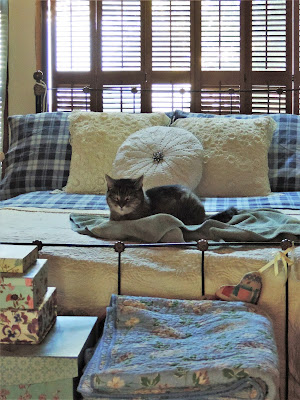 I also changed out the bedding
from blue summer flowers
to cozy, plaid flannel.

My old girl, Maggie camps out here
during the day on her blankie.

She is 18 years old, and does a lot of
complaining these days.
She mostly eats and sleeps and
goes outside only occasionally to sit
in the sunshine on the deck now and again. 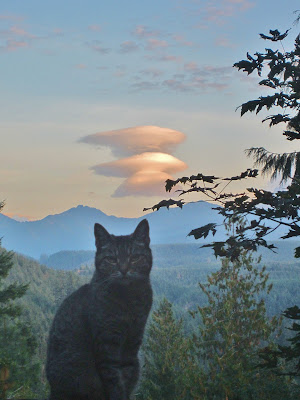 Here she is in younger days on the deck rail
where she tried in vain to hunt the hummingbirds.

I am trying to keep her comfortable and loved
until she decides to cross over
the rainbow bridge to meet up with her friends.
It hurts my heart. 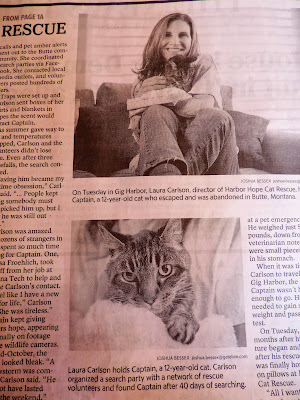 Speaking of cats - this happy-ending story
was in our local newspaper the other day.

It's a story of Captain, the 12 year old tabby
from Washington State, who was adopted from
a cat rescue facility run by this woman, Laura Carlson.

He had been adopted 4 years before by a woman
who, in September, was moving with him in tow,
to Alabama.

When they stopped at a hotel on Sept. 8th, in Butte, Montana,
Captain, who is declawed, and strictly a house-cat, escaped.
After trying in vain to find him, the woman moved
on, but sent a text message to Laura that he was missing.

Laura got to work organizing search parties via Facebook,
having volunteers set up wildlife cameras
and traps in the nearby woods,
and sending out press releases, but although there were
multiple sightings, no-one could catch him.

Finally, with a big snowstorm in the forecast in mid-October
and being on his own for 40 days, Laura herself flew
the 600 miles to Montana to look for him.

On the last day, when she was tired and discouraged, she
spotted a cat at the corner of the hotel and with two volunteers,
they finally cornered and caught him.

Laura said he was weak and a bag of bones, but Captain hasn't
used up all of his nine lives yet, and is now living
out his life with Laura, eating what he likes, and sleeping on pillows. 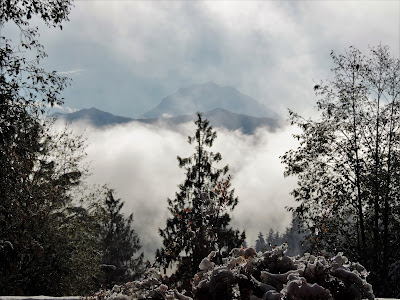 I woke up to this frosty scene, but the snow is
melting and we are expecting normal daytime temperatures
in the 50's for the rest of the week. 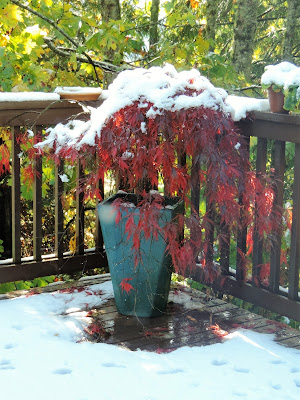 A brief glimpse of winter, soon to come. 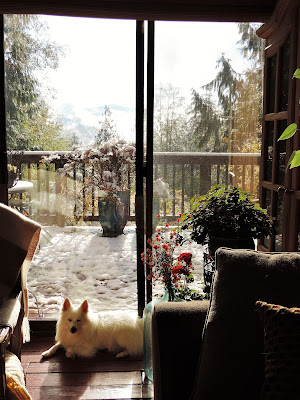 Kai dozes in the morning sunshine. 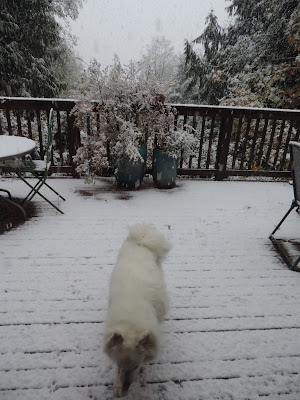 I hope that you had some lovely moments
this weekend, dear Friends.
Thank you for your sweet visits.
xoxo

"Remember that everyone you meet is
afraid of something, loves something
and has lost something.

Saying prayers for the loved ones lost
to senseless acts of violence this week
in New York and Texas.
Especially the children.
And the children left behind.

May the Angels always be with them.