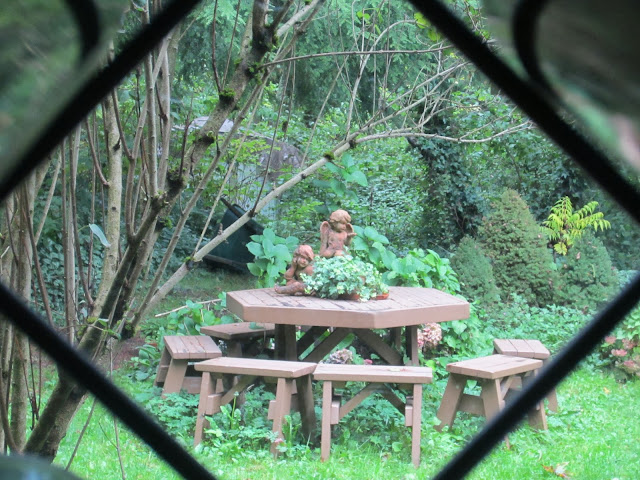 The last few weeks have been very busy for me.

Three of my children have celebrated birthdays.

And my Blue Eyes and I just celebrated our 41st anniversary.

We have also celebrated my eldest son's promotion at work and my younger son and his sweetheart's housewarming.

In between, I stained my deck, did lots of organizing and remembered my Dear Mother's birthday and  wedding anniversary, which brought up sad emotions.

But a trip to the sea with my two daughter's ended September on a lovely note.

Thank you for your dear comments - I wish I could have packed you all up and brought you along. Wouldn't we have fun?

But it was so nice to have my two girls to myself. 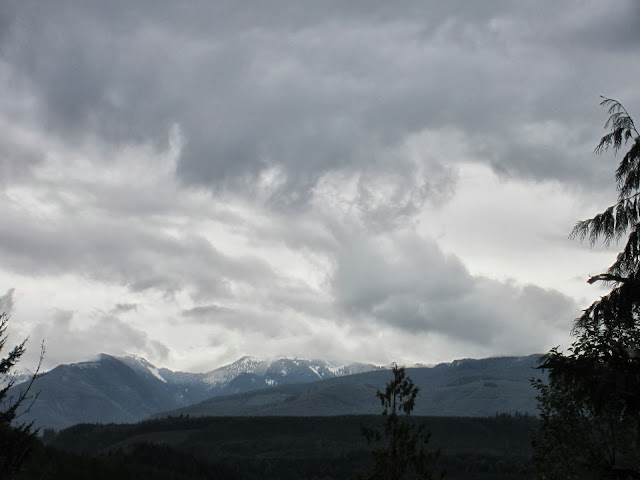 Now that October is here, I can slow down a bit.

Can you see the snow on the foothills?

It has been very stormy and cold here.

Three weeks ago it was 90 degrees. Today I will be lucky to see 50 degrees in the foothills! And it has been downright cold at night! 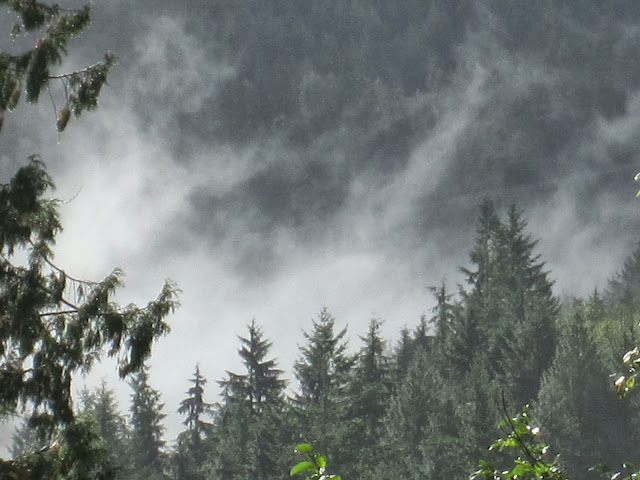 We have had storm after storm circling down from the Aleutian Islands in Alaska.

My Dad was stationed on Kodiak Island when he was in the Army/Air Corps back in the early 1950's during the Korean War. He told wonderful stories of his time there. But I will leave that for another time. 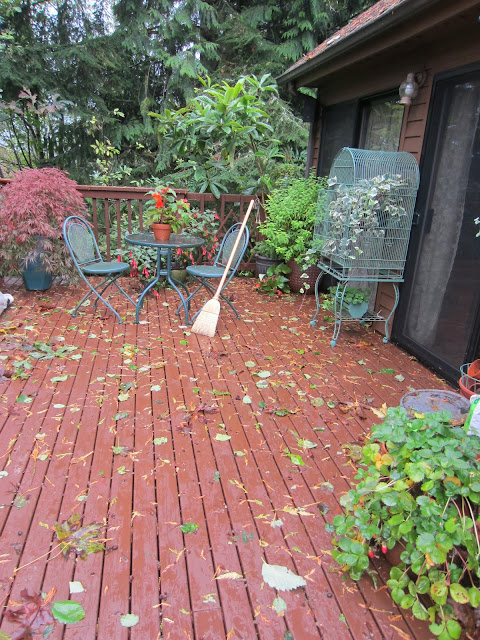 The storms have brought wind and heavy rain. We even had a tornado not too far from where my daughter Heather and husband Eric live! A category 1, but nonetheless, powerful enough to tip a parked locomotive, knock down one of those huge parking lot light poles and rip up roofs and small trees.

Living in the forest, we get lots of debris from the trees being blown about. This is unusual weather so early in the season and with the leaves still on the trees, they are being thrashed around quite dramatically. 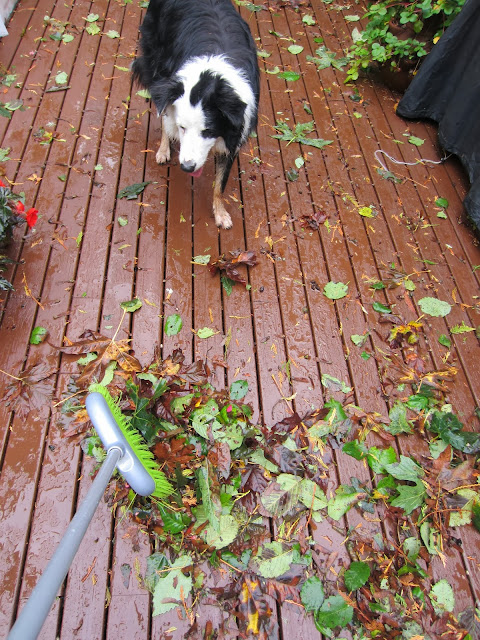 My crazy dog, Champ thinks this is great fun
and bites the broom and attacks the leaves I throw up in the air. 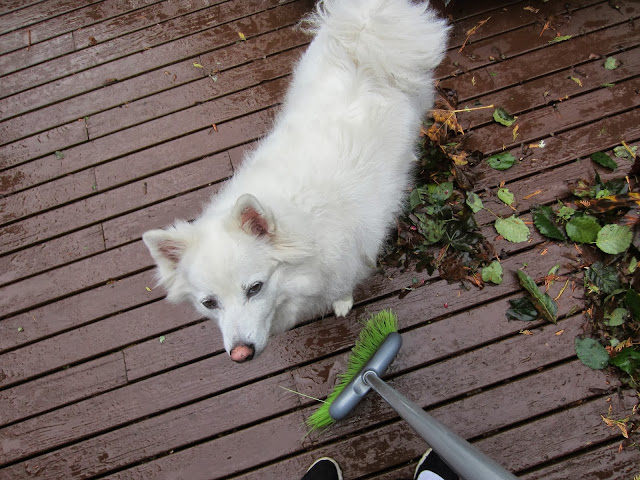 The other crazy one, Whitey, has a trick of his own.

He waits until I sweep everything up into a neat little pile......

Check out that calculating gaze. 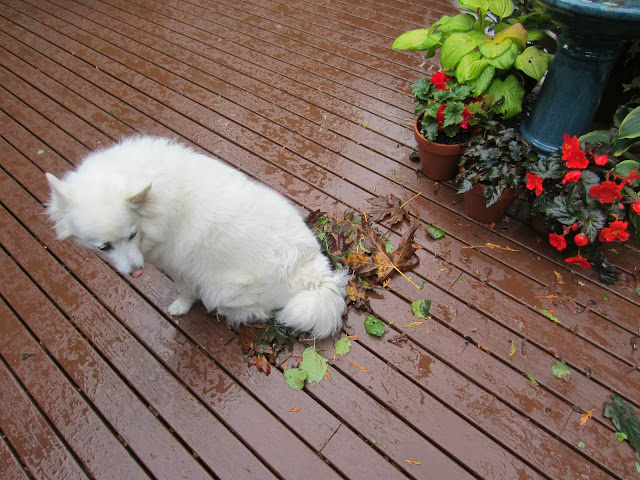 And then he sits on it! No amount of coaxing will get him to move. If I coax too hard, he will lie down in it and get all dirty! He does this every time I sweep outside. I have no idea why. Both are rescue dogs so I don't know much about their past.

So we allow their little 'quirks' with patience and love.

Despite my little 'helpers', I managed to tidy things up before the next round of storms comes in tonight. 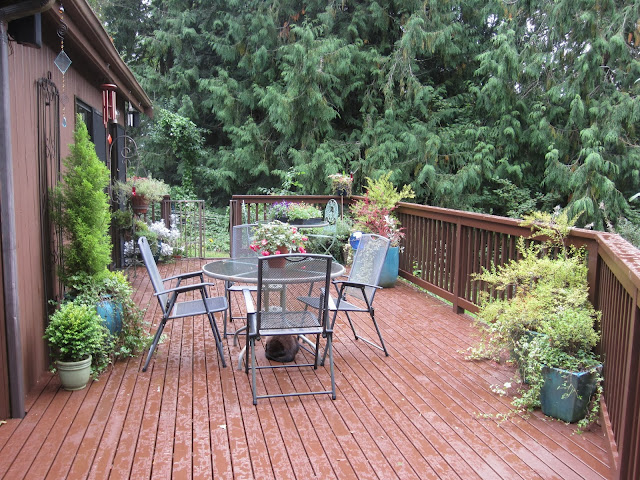 There, now that looks better!

Can you see the rear view of Miss Ling Ling sitting under the table?

I have tossed all my hanging baskets in the compost heap. 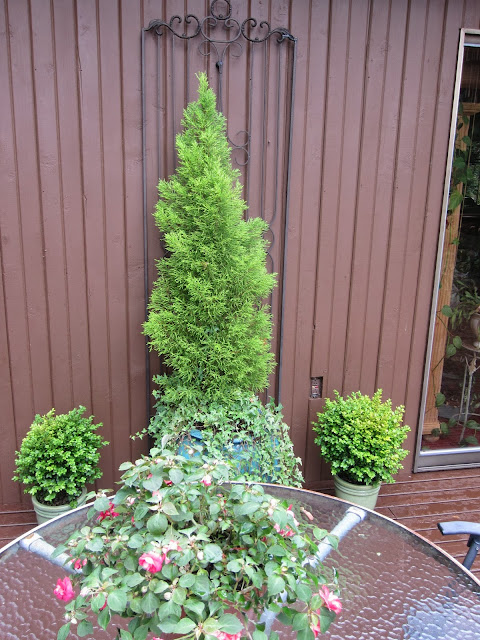 And now just the evergreens remain. 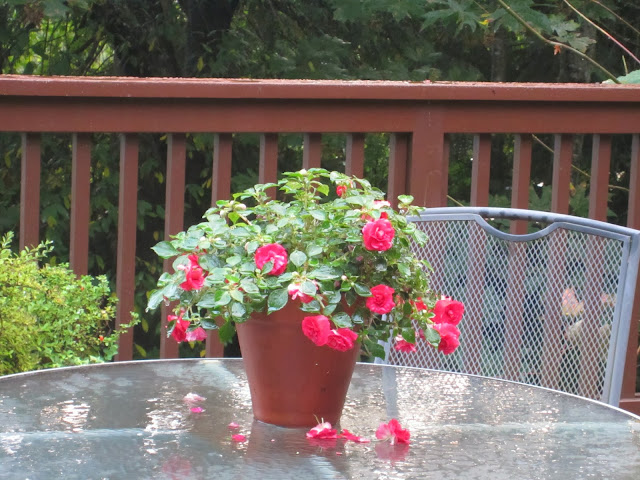 Except for these - Double Impatiens, still going strong.

I will be sure to look for these in the nursery again next year,
as they are an annual and won't be returning this spring. 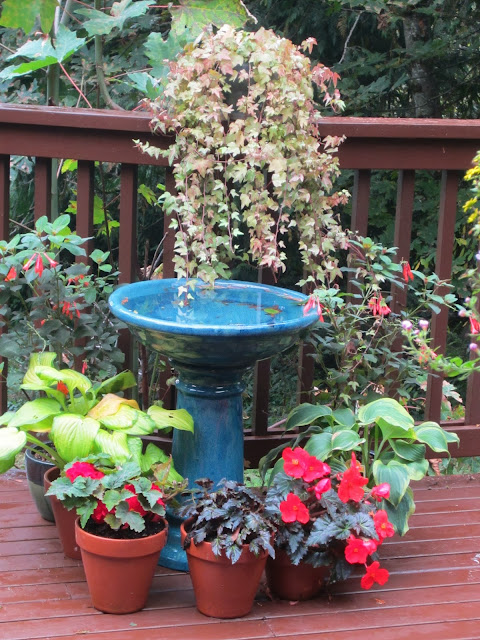 I have gathered the remaining blooms together around the bird bath. There are tuberous begonia's in front and tall orange fuchsia behind the hosta. I will plant the fuchsia in the ground soon, and save the begonia corms for next year.

The birdbath was empty before the storms. That is how much rain we have had! Soon this birdbath will be put away for the winter. I have another cement one for the winter birds out front. 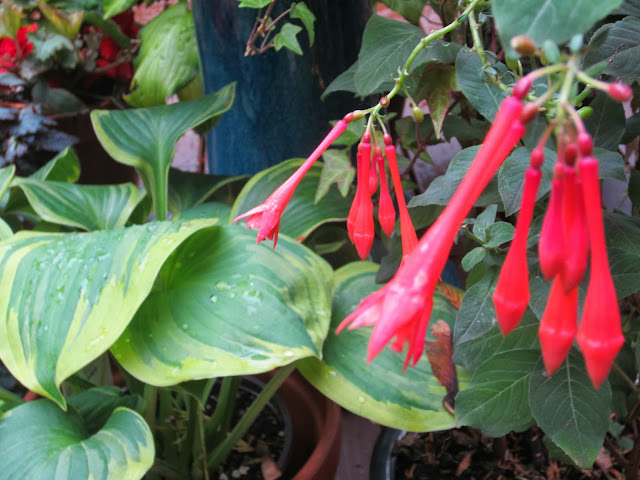 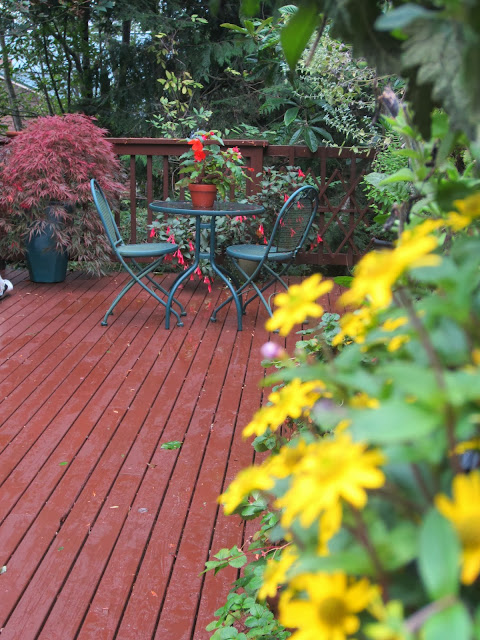 Another begonia blooms on the table and behind it a large pot of the same bright orange fuchsia.

The Japanese Maple always turns such a beautiful shade of deep rose every fall.

The yellow daisies are growing in the one remaining hanging basket. 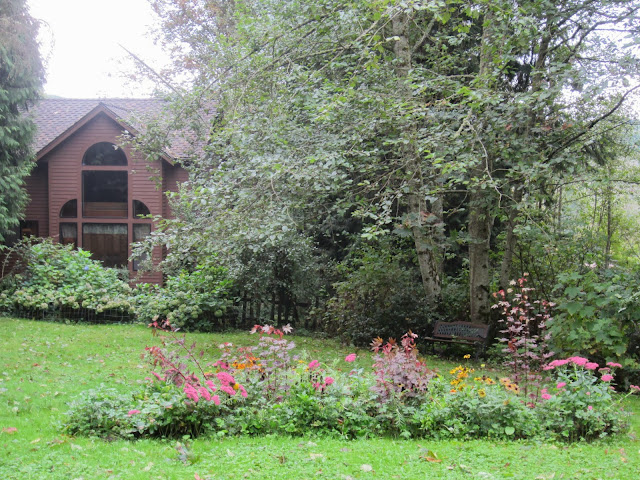 My cutting garden still has some color, but with all the rain I have not attended to it much. 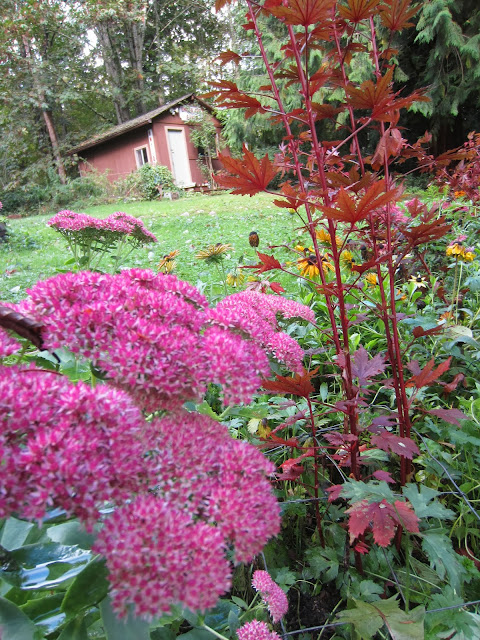 The sedum contrasts nicely with the burgundy leaves of the non-flowering hibiscus. 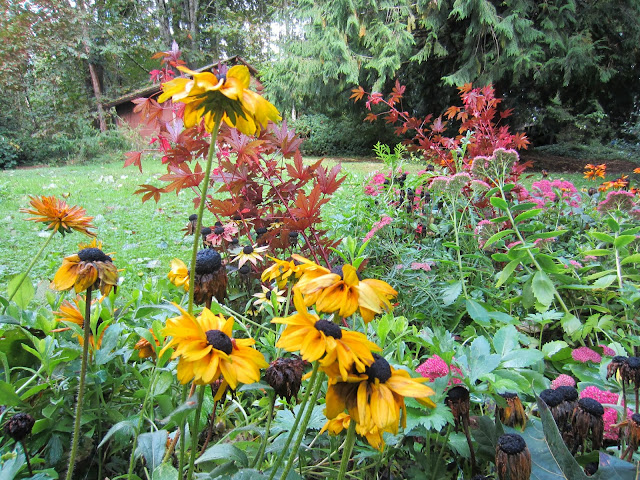 There are some Black-Eyed Susan still blooming, but I am letting them go to seed for the birds. 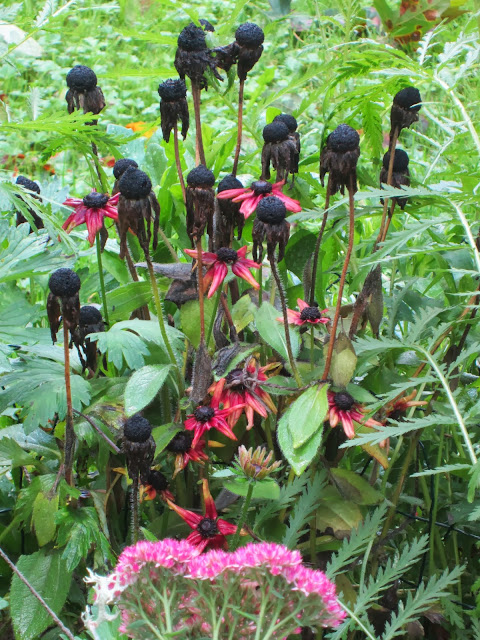 If I am lucky, these will reseed. I will also gather some seed for next spring. 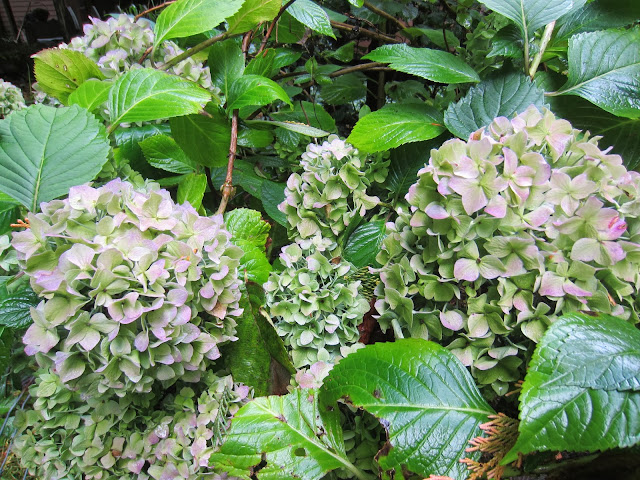 The cool weather has turned my Nikko Blue Hydrangeas gorgeous shades of chartreuse tinged with rose. The next dry day I will gather large baskets of the now papery blooms to keep on top of my tall cupboards. 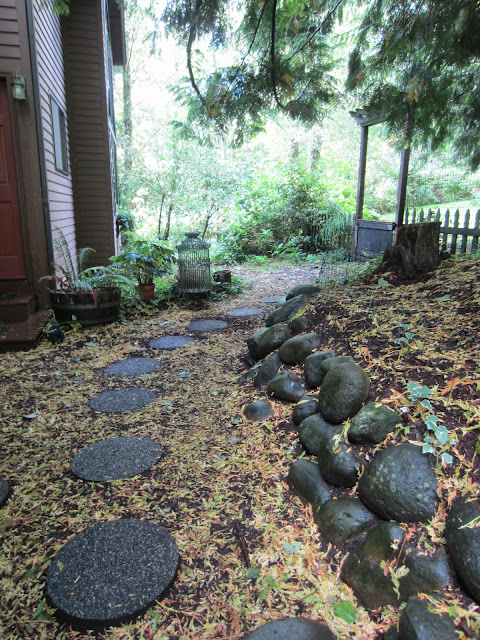 Did you know that Western Red Cedar's old growth turns golden at the tips and drop, carpeting the ground? 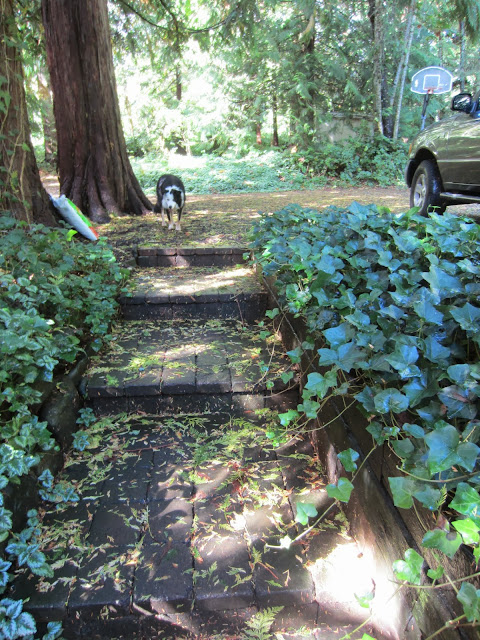 This keeps me busy sweeping the walkway from September through November.

Champ is waiting by my bag of potting soil, hoping I am going to sweep! He is ready to attack that broom! 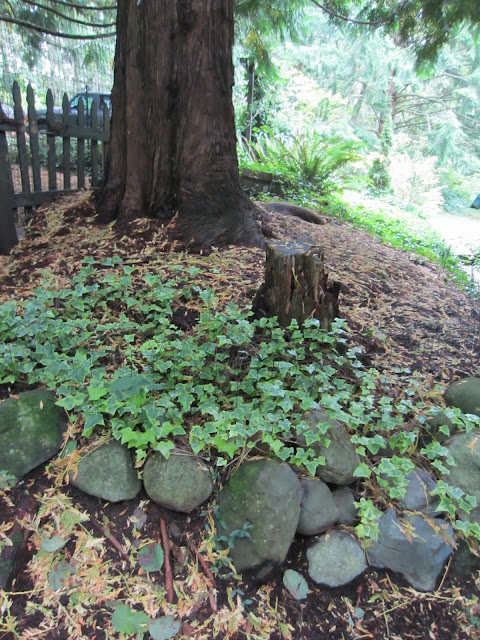 The golden needles create a lovely effect. Soon we will not see any bare ground. 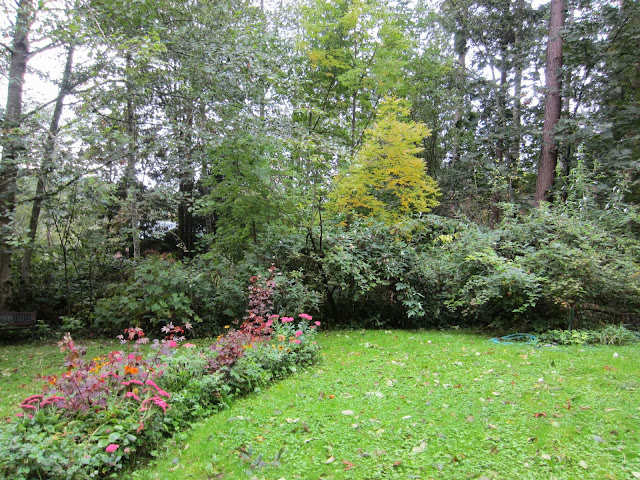 There is just a hint of color in the forest now. 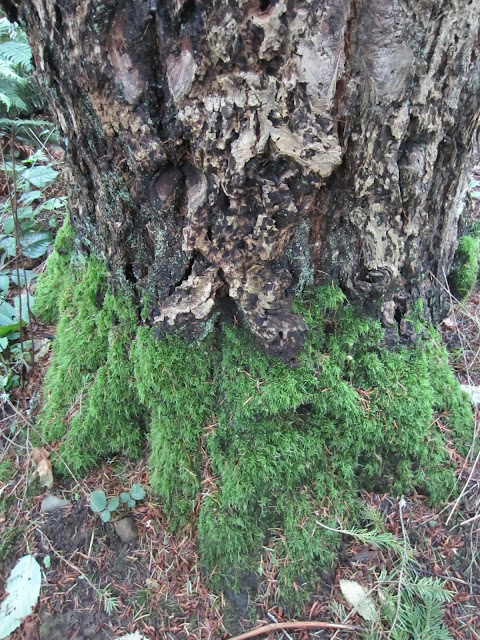 And the mosses are enjoying the fall rains.... 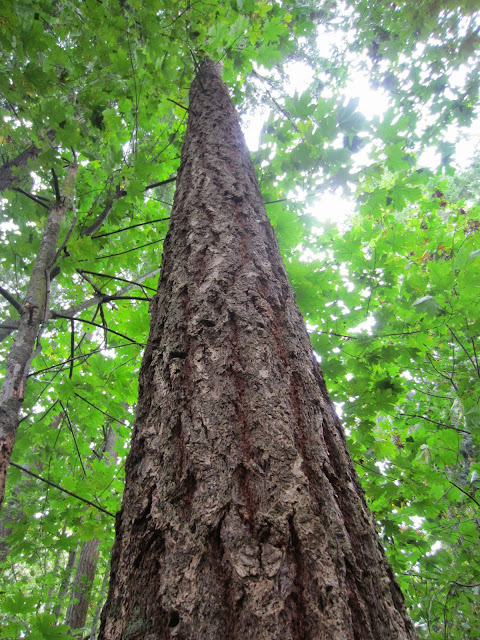 Growing along the base of the mighty Douglas Fir.

October is a wonderful time to reflect on the summer now passed and prepare for the long winter ahead.

Nature rewards us with her fiery beauty and bountiful harvests this time of year, to ease the transition.

What is your favorite thing about fall?