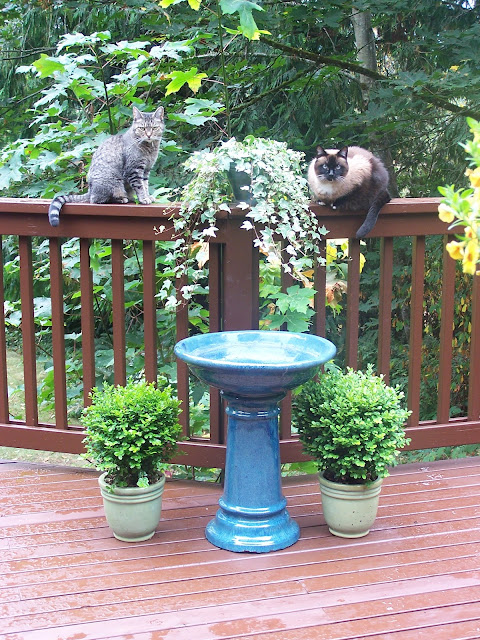 It rained very early Saturday morning. But only enough to leave the newly stained deck, puddled up with water.
Maggie and Ling Ling wanted to go out, but didn't want to get their feet wet.
This is where I found them, waiting to be rescued. ﻿ 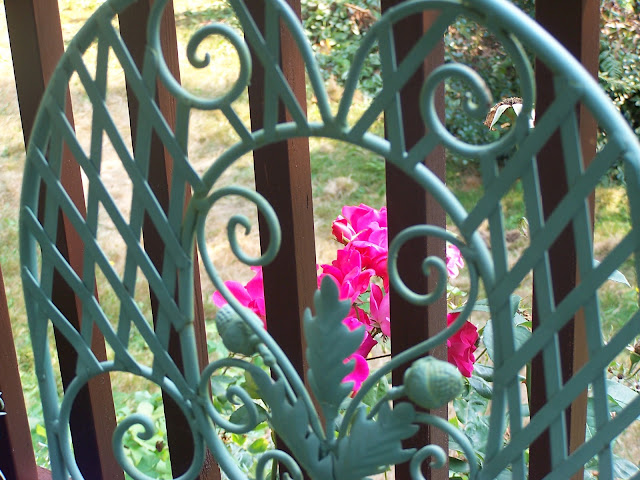 This tiny bit of rain did nothing to relieve the two months of rainless days we have had. We have broken the record for the driest August and September ever recorded.
This is very unusual for Western Washington where it is known for it's rain!
I have managed to keep my roses blooming in this dry spell by diligently watering.
But you can see my grass has turned brown. 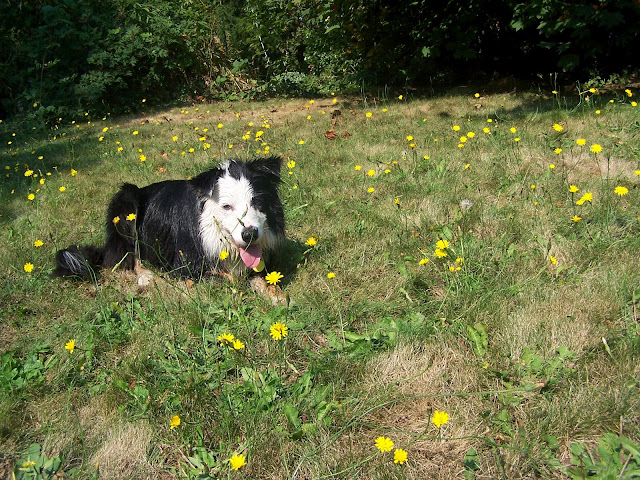 We stopped mowing the back 'pasture' and have let the Hawk weed bloom. The dogs love to roll in the dry grass. It gives them a good back scratching! 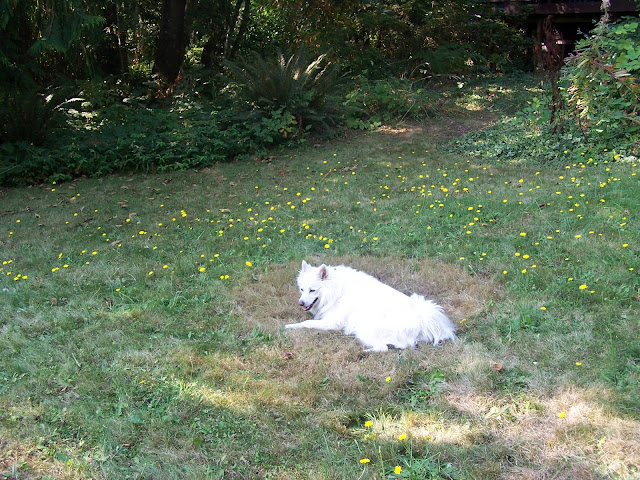 Whitey loves this dried out circle of grass where we tried to re-seed after burning some brush from our ice storm last winter.
Why do the white dogs love rolling the most? 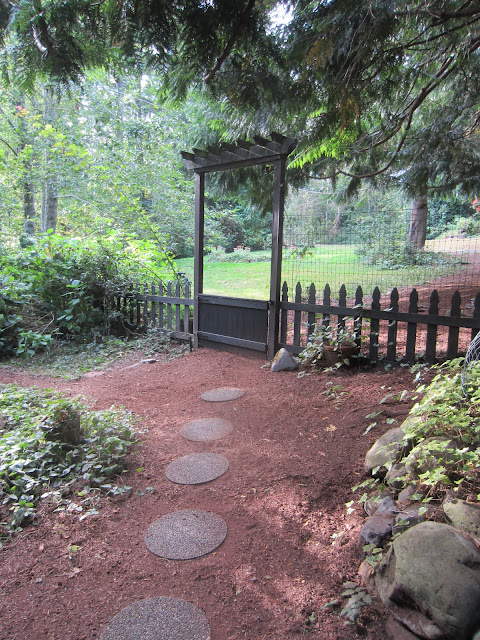 There is still some green in the front yard after you pass under the cedar trees. The evergreens are dropping their needles early in this dry weather and every day I go out and sweep the walkway and stepping stones. Soon, the ground will be covered in beautiful gold as the oldest needles are shed before winter. 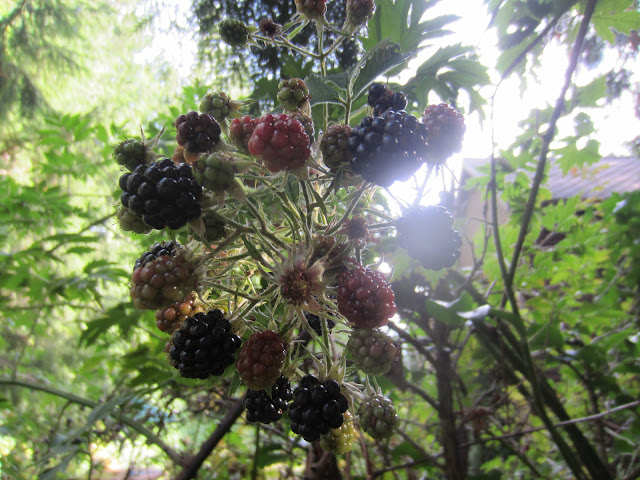 But one benefit to all of this sunshine are the blackberries. This year, I have a bumper crop. My freezer is nearly full of delicious black jewels, just waiting for my culinary creations! 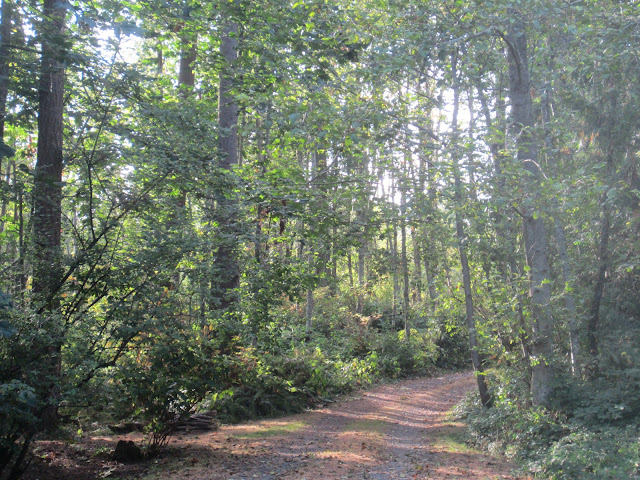 We are getting just the barest hint of Autumn in the forest, as the golden rays play with the shadows. 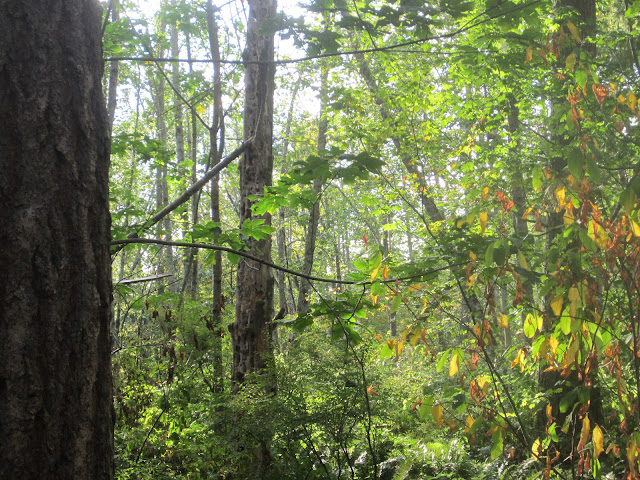 The light is soft and diffused. The air is still and pungently sweet with the first decaying leaves.
The birds quietly twitter.
I heard my first owl of the season. 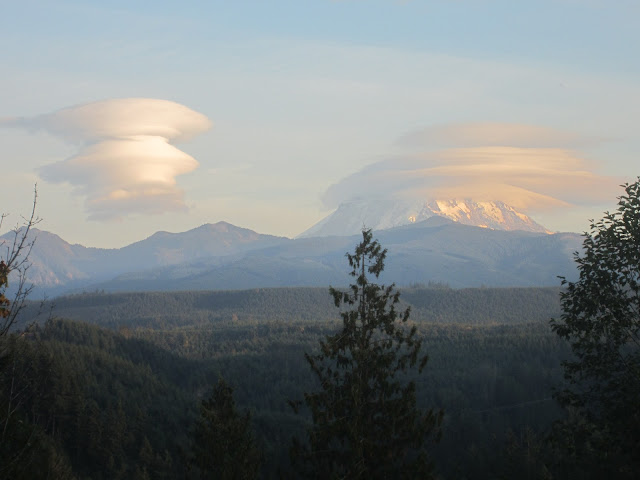 The hills are still cloaked in dark green.
But the barest touch of gold glimmers. 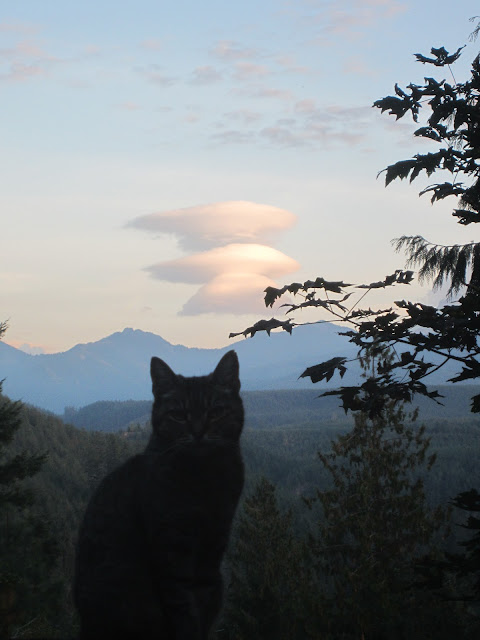 And as the sun sets, the full moon rises and off in the distant hills an elk bugles his ancient song.
xx
﻿
﻿
Posted by Karen @ Beatrice Euphemie at 12:13 AM