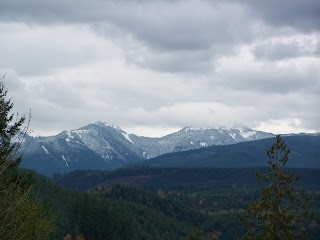 We have had our first snow in the foothills. All week we have had below freezing temperatures at night, but during the day if the sun is shining, it warms up nicely. I have been spending some time outdoors, enjoying these last mild days. 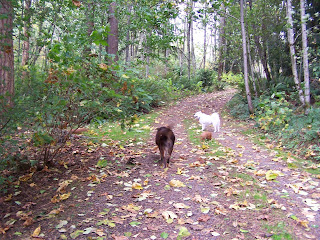 It has been windy at times and walking is so enchanting with the leaves falling all around. But right after I snapped this picture, a big tree limb fell right in front of us. We all ran back. If you look closely, you can see my daughters' two mini-dachshunds, one hidden at the edge of the bush to the left and one behind Whitey. 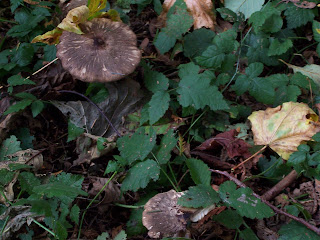 But soon the wind died down and we were out once again. I follow the dogs while they explore, and here we have found some mushrooms. They must be tasty, because one is half eaten. We found more mushrooms everywhere we went, large ones like this, all half chewed, tiny ones peeking out of the moss (these were not bothered), and little round puff-balls (also eaten). I would love to see what creature found them so tasty! I suspect squirrels, chipmunks and mice. 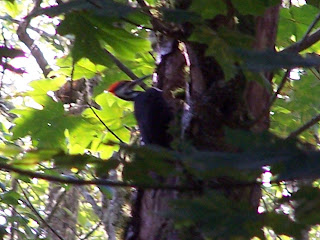 We heard some loud drumming and went to investigate. This is what we saw! He is a Pileated Woodpecker. He is about the size of a large crow. Here he was hollowing out this dead tree. He didn't seem to be bothered by us as long as we kept a little distance. 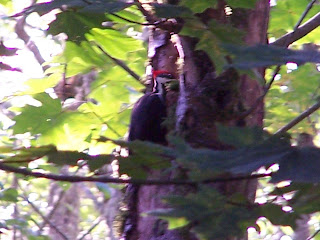 You can see his beautiful markings in this shot. He was very busy, hammering away, and it took many pictures to get a clear shot. These amazing birds hollow out large cavities that other creatures use as homes. We leave all dead trees standing, just so we can enjoy these magnificent birds. They fly with a loud call that sounds prehistoric. It used to scare my old dog, Twiggy, (she is not with us any longer) and she would run to the door to be let inside. 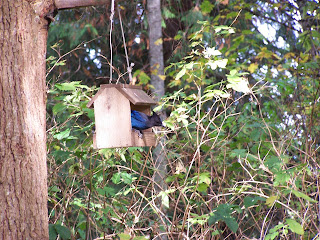 Our little flock of Stellar Jays have settled in for the winter. They love to eat the black oil sunflower seeds I keep in the feeder, which they share with the squirrels, the chickadees, nuthatches, towhees, kinglets, and juncos. (And the occasional possum, skunk, raccoon and bear!) 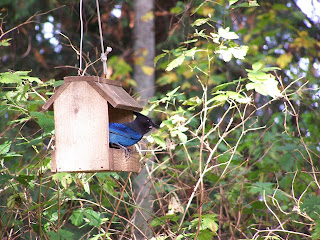 This guy has food hanging out of his mouth. They are very greedy and will gobble up anything edible, including dry dog and cat food. But I love them, they are so gorgeously blue and also act as the watch dogs of the bird kingdom. They will warn all the woodland inhabitants of approaching predators, by loudly screeching. They also imitate the cries of hawks and eagles to warn other birds. When the Jays make these imitating cries, all other birds go on alert and dive into the underbrush. The Jays will bravely dive bomb these intruders. But every once in a while, sadly, one will be killed, mostly by the very fast and agile Cooper's Hawk. Lucky for the Jays, we haven't had one living here for a few years. 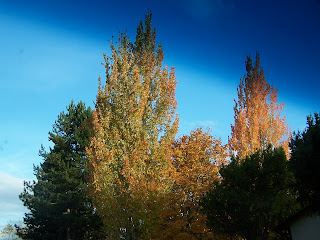 I love the golden leaves against the blue sky and the dark evergreens. 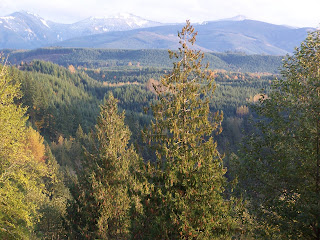 The maple and cottonwood trees stand out this time of year against the sea of green. Soon all the leaves will fall, leaving bare branches against the gray skies, a beauty of it's own. But until then, I will be spending as much time as I can enjoying this beautiful season of gold.
I hope you get to take a beautiful Autumn stroll soon, too!
﻿
Posted by Karen @ Beatrice Euphemie at 11:44 AM 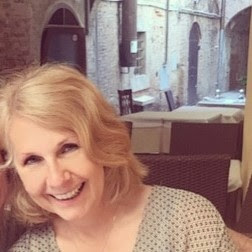