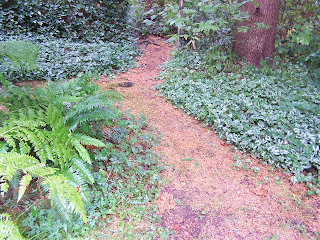 My sister 'K' called me the other day. She told me the most amazing story. It all started years ago, 33 years to be exact. She was riding home in the passenger seat of her boyfriend's car. They were having a little argument. She took her boyfriend's class ring off her finger, telling him, if that was the way he felt he could have it back. He must not have said the right thing. She threw it at him. The window was open. Out it went.
The argument was over. They searched and searched. It was no-where to be found. They went back many times, as it was close to our childhood home. They never found it. I heard this story many times over the years. My sister married her boyfriend. They have 3 grown children. They have two granddaughters. They are still together.
They live here in Washington, now. Far from the childhood home. Far from her and Hubby's relatives. 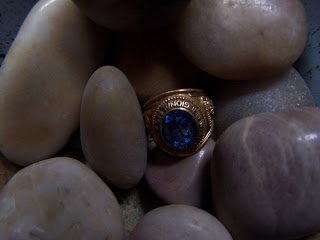 But 33 years almost to the day, they received a phone call from her brother-in-law in the distant state. Hubby's older brother. He had good news. Someone found the ring! The wonderful people who lived in the home along the road where the ring was tossed, found it, tracked down the owner by it's serial number, knew my sister's brother-in-law.
Aren't people wonderful? It really restores your faith when you hear stories like that.
When I was dating Hubby, the first gift he gave me was a gold ID bracelet. I loved that little bracelet and I wore it every day. It had a little dangling gold heart. My name was engraved on the front. Love, 'D' was engraved on the back. 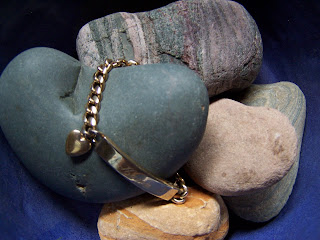 But during PE class, we had to remove all of our jewelry. We had wire baskets that slid into shelves that we could lock, for our belongings. But one day my bracelet was missing. I looked everywhere for it. I checked the lost and found every day for a month. It never turned up.
But on the first day of school, the very next year, my PE teacher told me to come into her office after class. I thought I had done something wrong. I was nervous when I walked in. But she opened her drawer and pulled out my bracelet! She had remembered how I had searched for it the year before. She told me that over the summer, they had dismantled the shelving unit to move it, and there it was, where it had slid behind.
After that, I always had a tender spot in my heart for that gruff old PE teacher. We became friends.
I still have the bracelet. 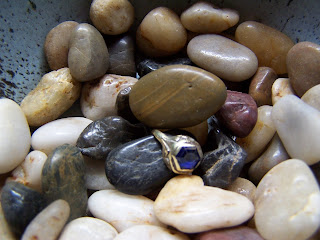 Around this same time, I was walking home from my bus stop. We lived in a neighborhood of recently constructed homes in a wooded area along a pond. There were still a few empty lots that had not been built upon. This particular lot sat empty for many years. It was still part of the woods. The sun was low that Autumn afternoon when I was walking home alone after taking the late bus from school. It must have been the way the sun rays were shining through the trees, but I saw something sparkling. It caught my eye. I walked into the the empty lot to investigate. And there on the ground, partially hidden by fallen leaves was a Sapphire ring.
When I showed it to my Mother, she told me that she would ask around the neighborhood to see if anyone had lost it. It was a beautiful ring, with 18 karat gold hand worked designs. It looked very old. I also asked all of the kids in the neighborhood, thinking maybe one of them had gone into their Mother's jewelry box.
But no-one ever claimed it.
It perfectly fit my finger and I have worn it ever since. I often wonder about the woman who lost it. Maybe it was lost many, many years before when the area was still a forest. 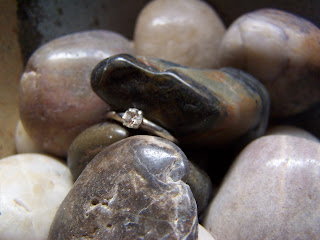 I have one more story to share with you. This is also an amazing story. But true.
We had just moved onto this land. We had no laundry facilities, as we were roughing it in a small trailer and what is now Hubby's workshop. We had spent the day at the laundromat and doing errands, using Hubby's big International Scout to get around. We had gone to so many places that day, grocery shopping, laundry, post office, and even to the little pub for a bite to eat.
And that is where I noticed it. My diamond was missing from my wedding ring! One of the tall prongs had broken and it had slipped out. I was beside myself, searching everywhere. We back tracked to every place we went, frantically searching the ground, the floors, inquiring. It was gone.
I took my ring off and tucked it away inside my jewelry box. We had no money to replace it. We had 3 little ones, a 4th on the way, a home to build.
I forgot about it. A year went by. It was our Tenth Wedding Anniversary. Hubby said he had a surprise for me. He pulled out a blue velvet box. When I opened it, there was my ring. With a diamond!
I asked him where he found the money to replace the diamond. I was a little bit upset, as we had very little money for unnecessary things. And then he told me this story.
He said that he was cleaning out his Scout. He was sweeping out the front passenger side with a whisk broom. And something very sparkly caught his eye. He followed the sparkle all the way until it hit the ground. And then he marked the spot with a rock, as it had fallen into the gravel. He went and got his flashlight. And there it was. A diamond. My diamond.
I didn't believe him.
But he insisted it was true.
He knew our wedding anniversary was coming up. So he had it re-mounted. And presented it to me in the blue velvet box. With a dozen red roses.
Isn't he so romantic?
﻿
Posted by Karen @ Beatrice Euphemie at 12:55 PM