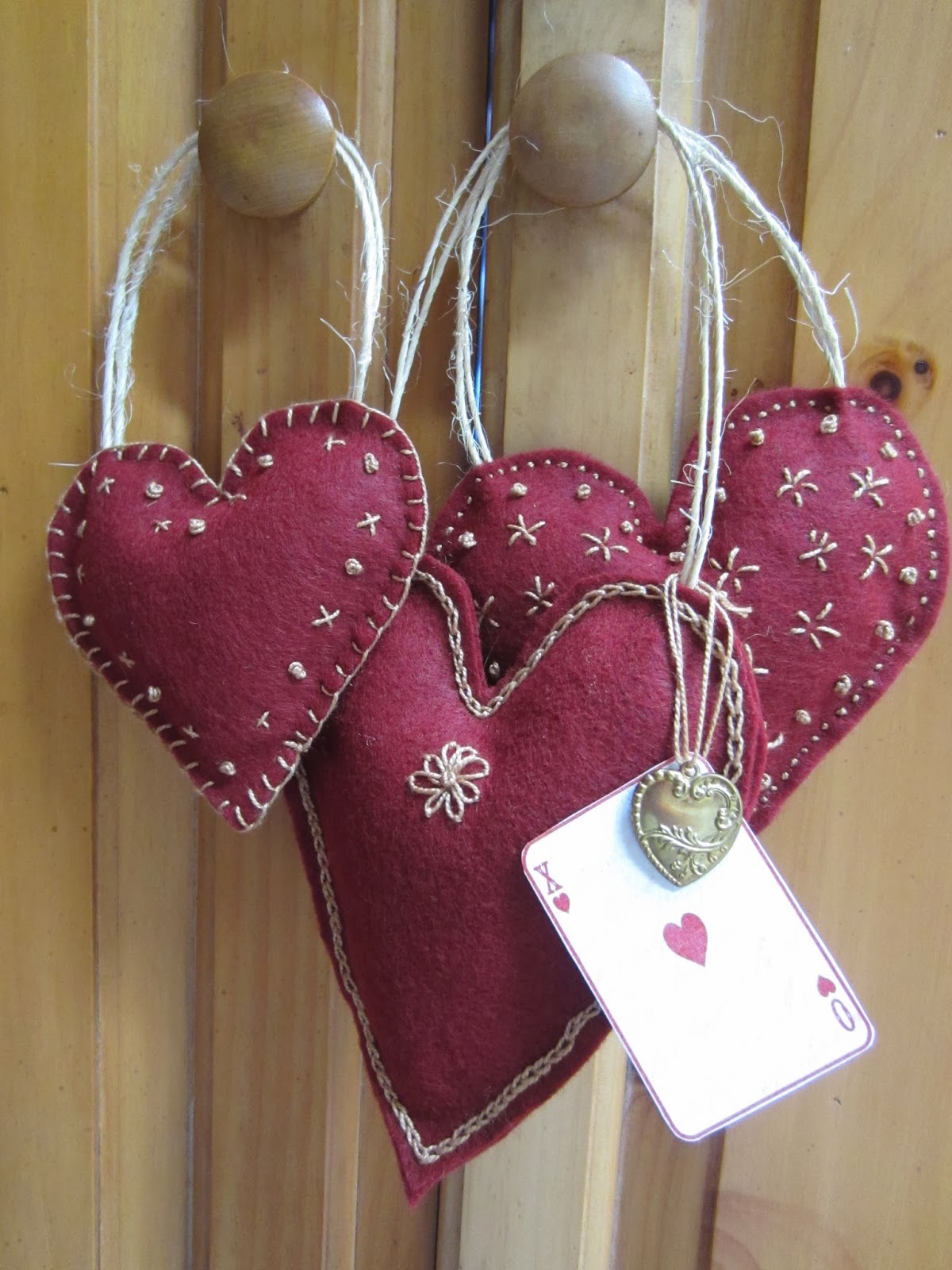 I have been busy stitching some Sweet Hearts for Valentine's Day.

I saw this idea in the Feb. 2007 issue of Country Home magazine and saved it for 'someday'.

Made from felt and embroidered with simple stitches,

these make charming gifts or decorations to hang

on a cupboard door, clothes hanger or special package.

Cardstock or thin cardboard for patterns

Twine or ribbon for hangers 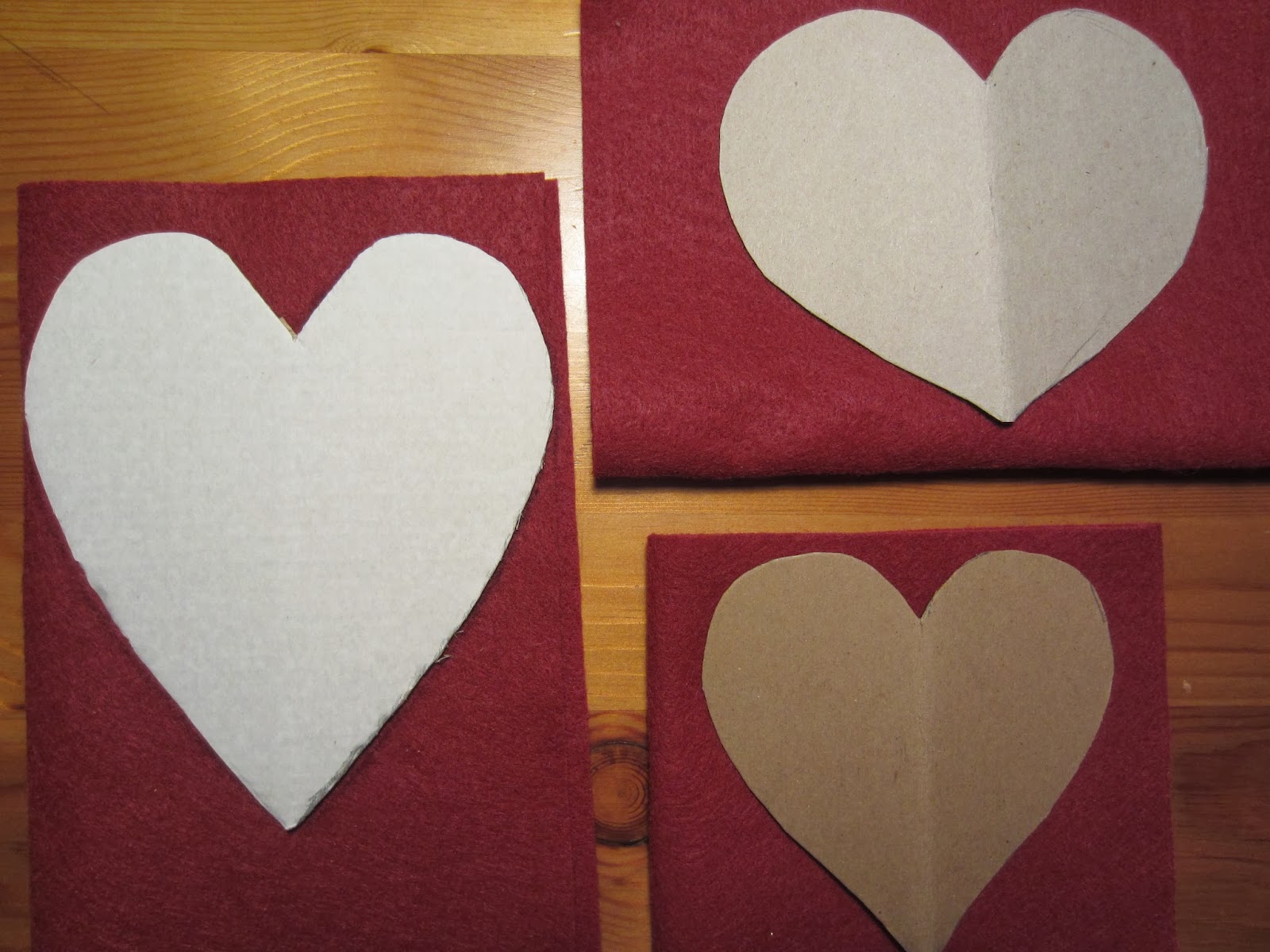 Make 3 different patterns by folding thin cardboard in half
and drawing one half of a heart shape along the fold. Cut out and open.

I made mine in various sizes - all under 6 inches.

Trace around patterns on felt using a ball-point pen. 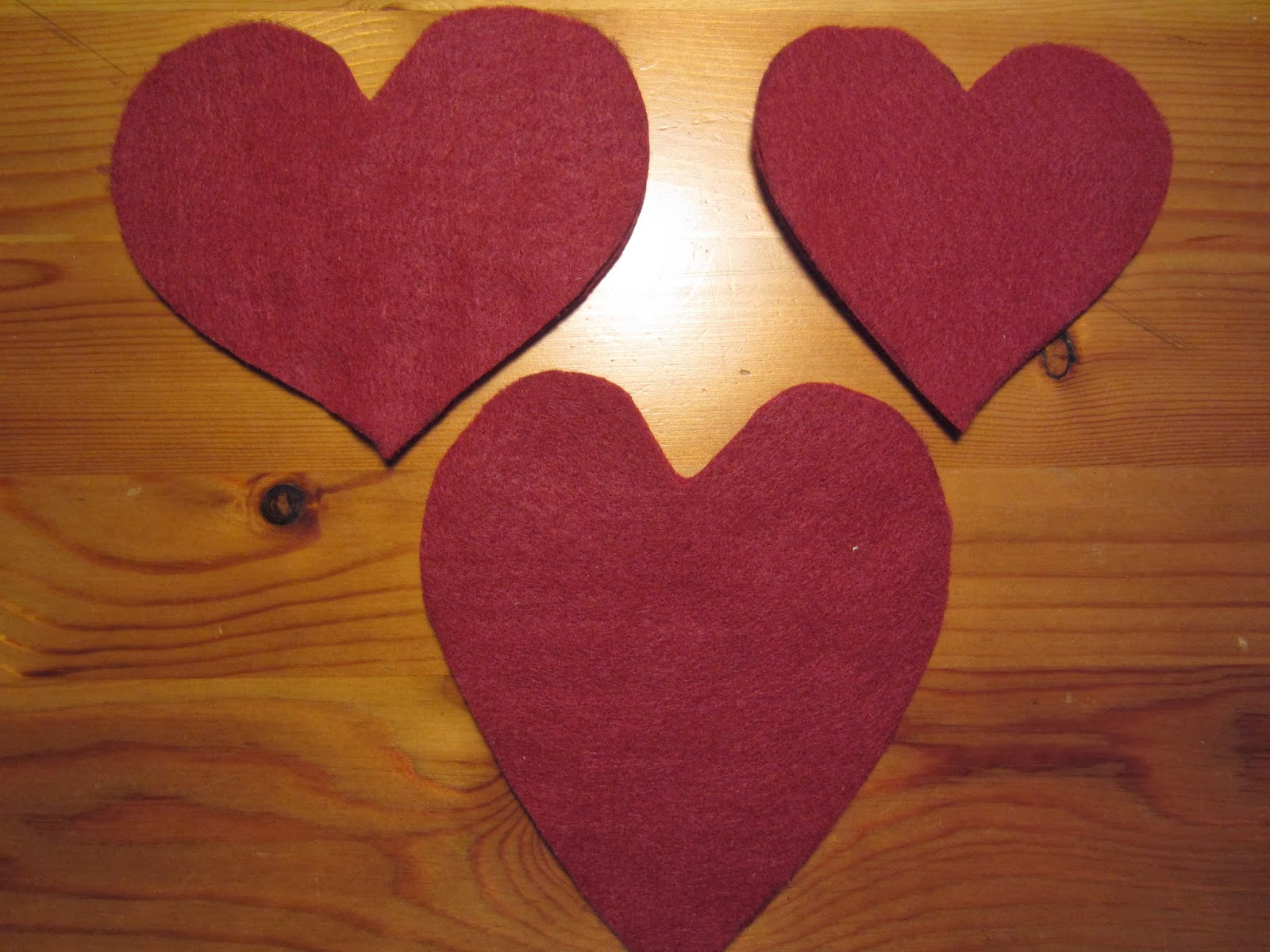 Cut out the double thickness felt, creating three hearts with a front and back. 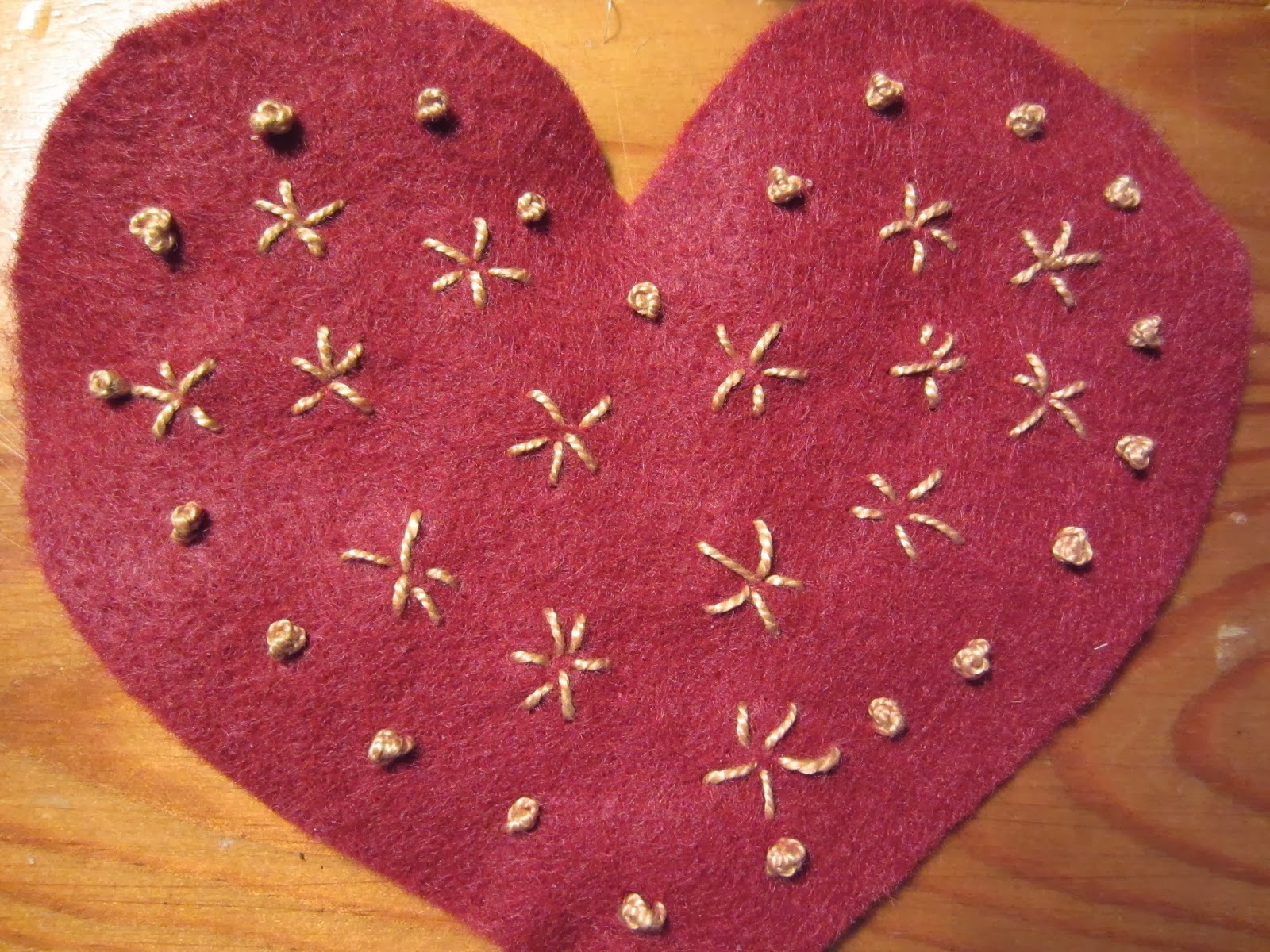 Using one side of each heart pair, embroider a simple design.

Here I used straight stitches to form 'fireworks' with french knots along perimeter. 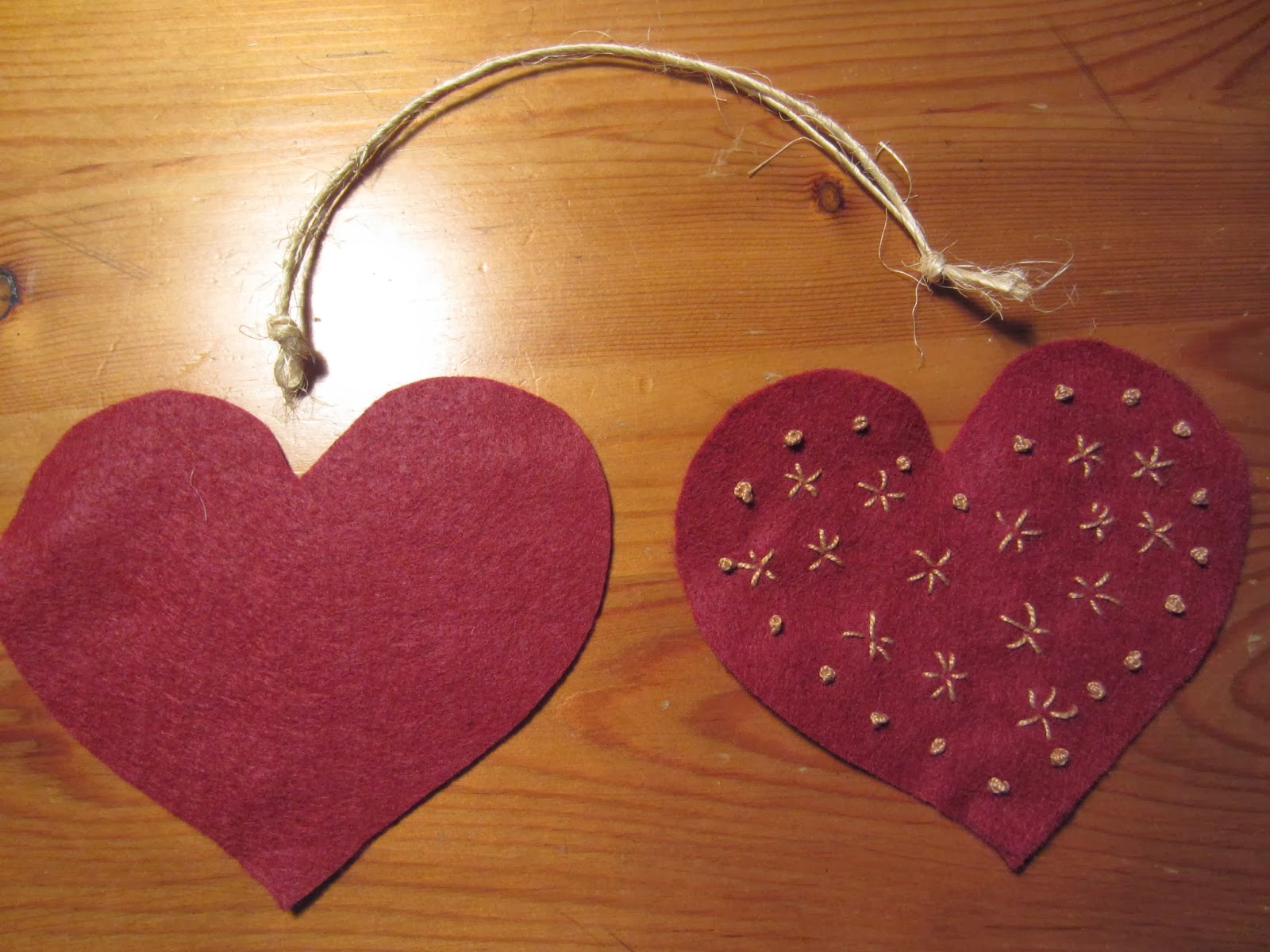 To create a hanger, cut twine or ribbon approx. 8-10 inches and knot at both ends.

I used a doubled length. 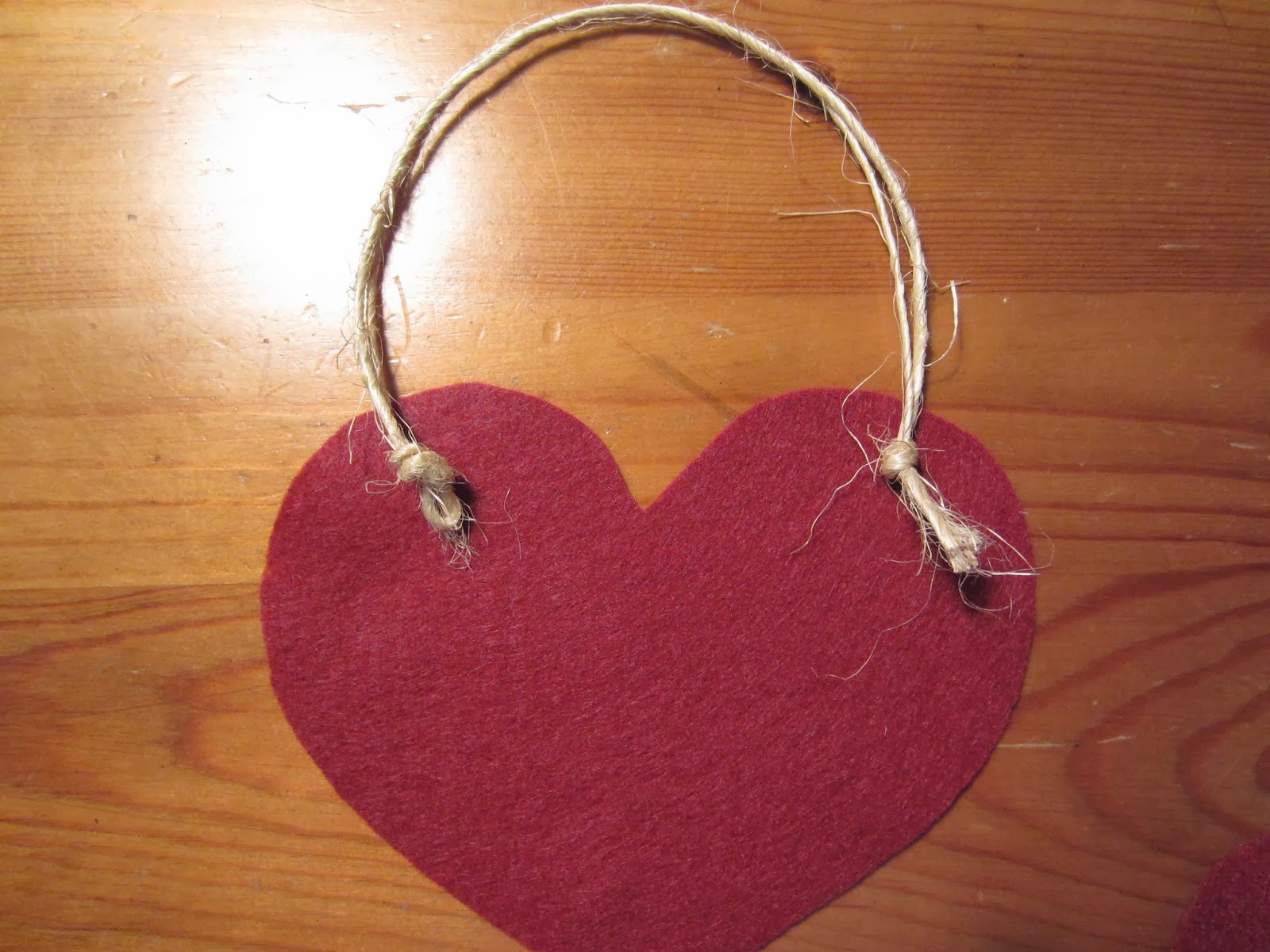 Place knotted hanger over back of heart, like so. 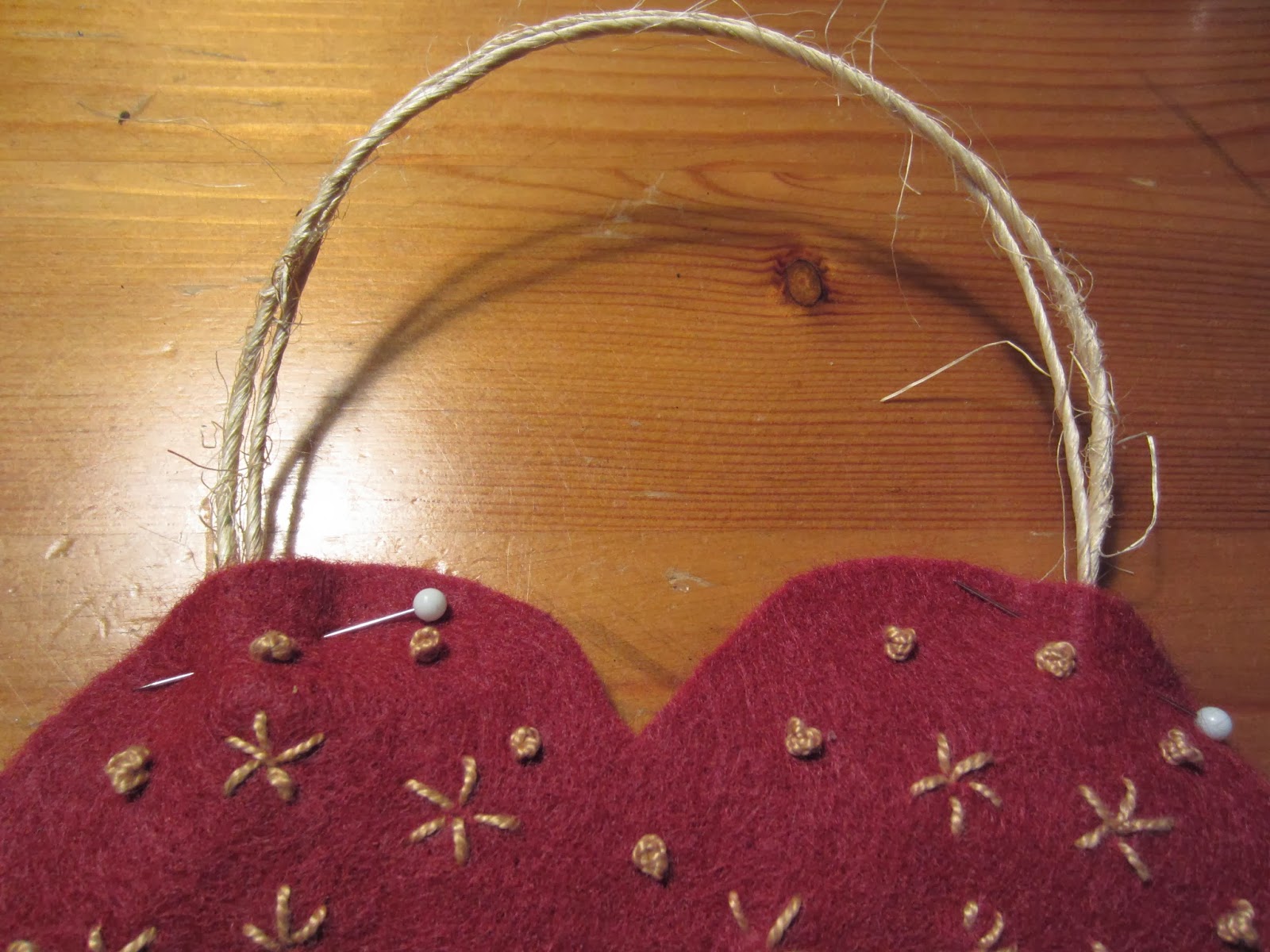 Pin embroidered top over all, lining up front and back to match. 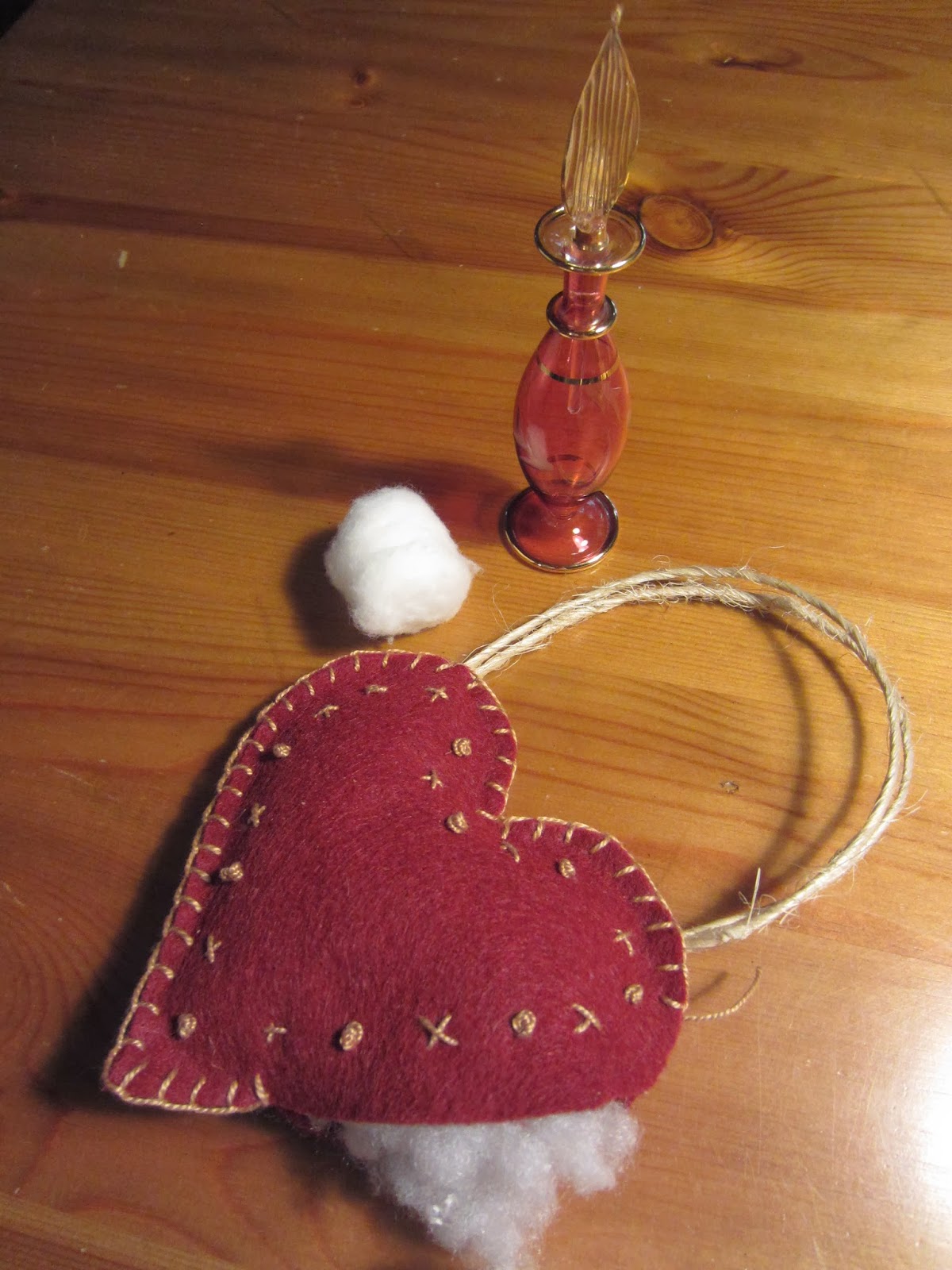 Sew around perimeter, leaving an opening along sides for stuffing.

The knots will keep the hanger from slipping through the stitches.

Here I have used a blanket stitch around the edges.

If desired, you can scent your heart by applying a small amount of your favorite cologne or perfume to a cotton ball and placing inside with stuffing. 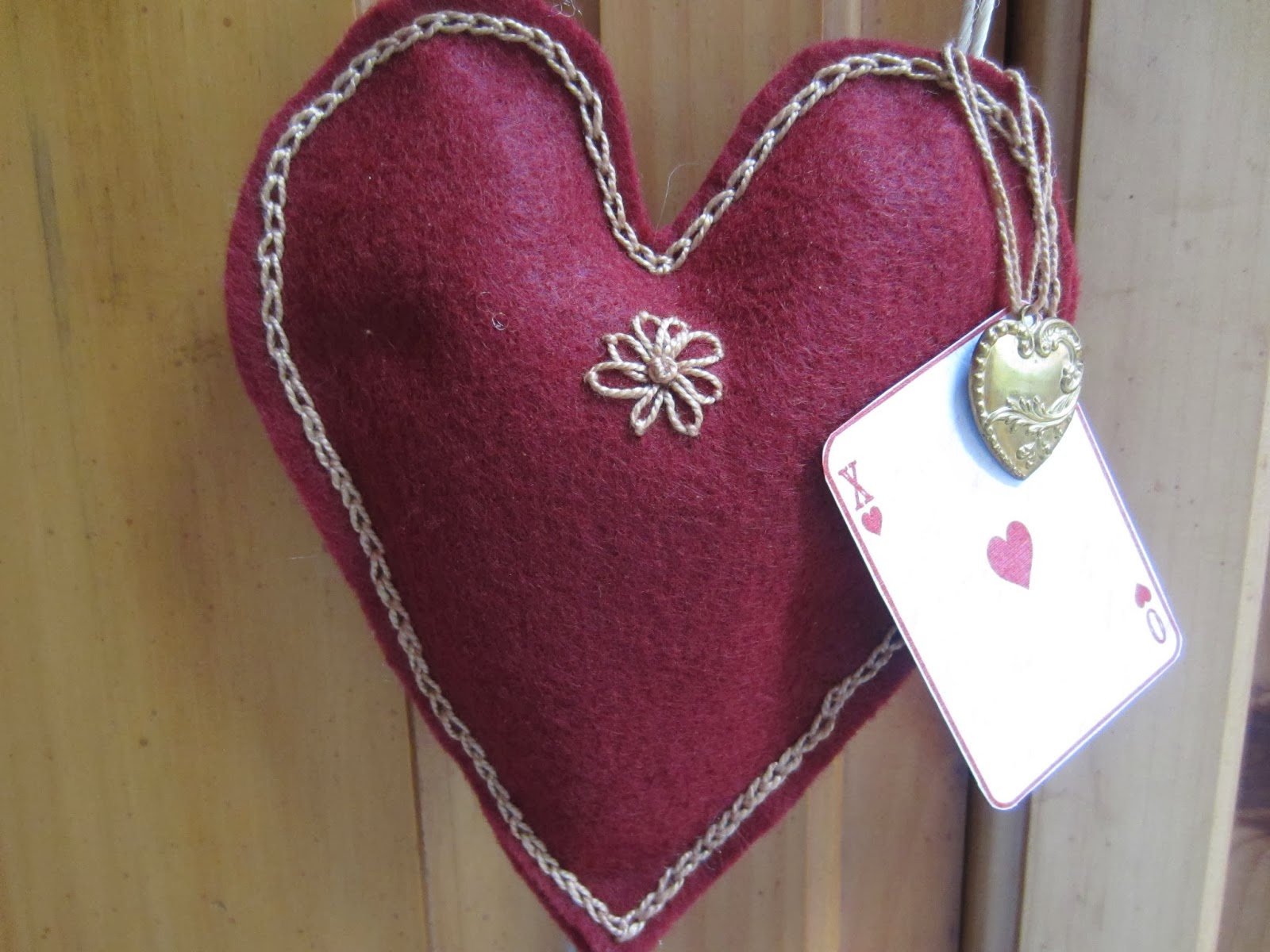 I've added a tiny tag made from scrapbook paper and a small charm to the largest heart.

I used a daisy stitch to make the 'flower' with a french knot in the center.

The edging is done in chain stitch. 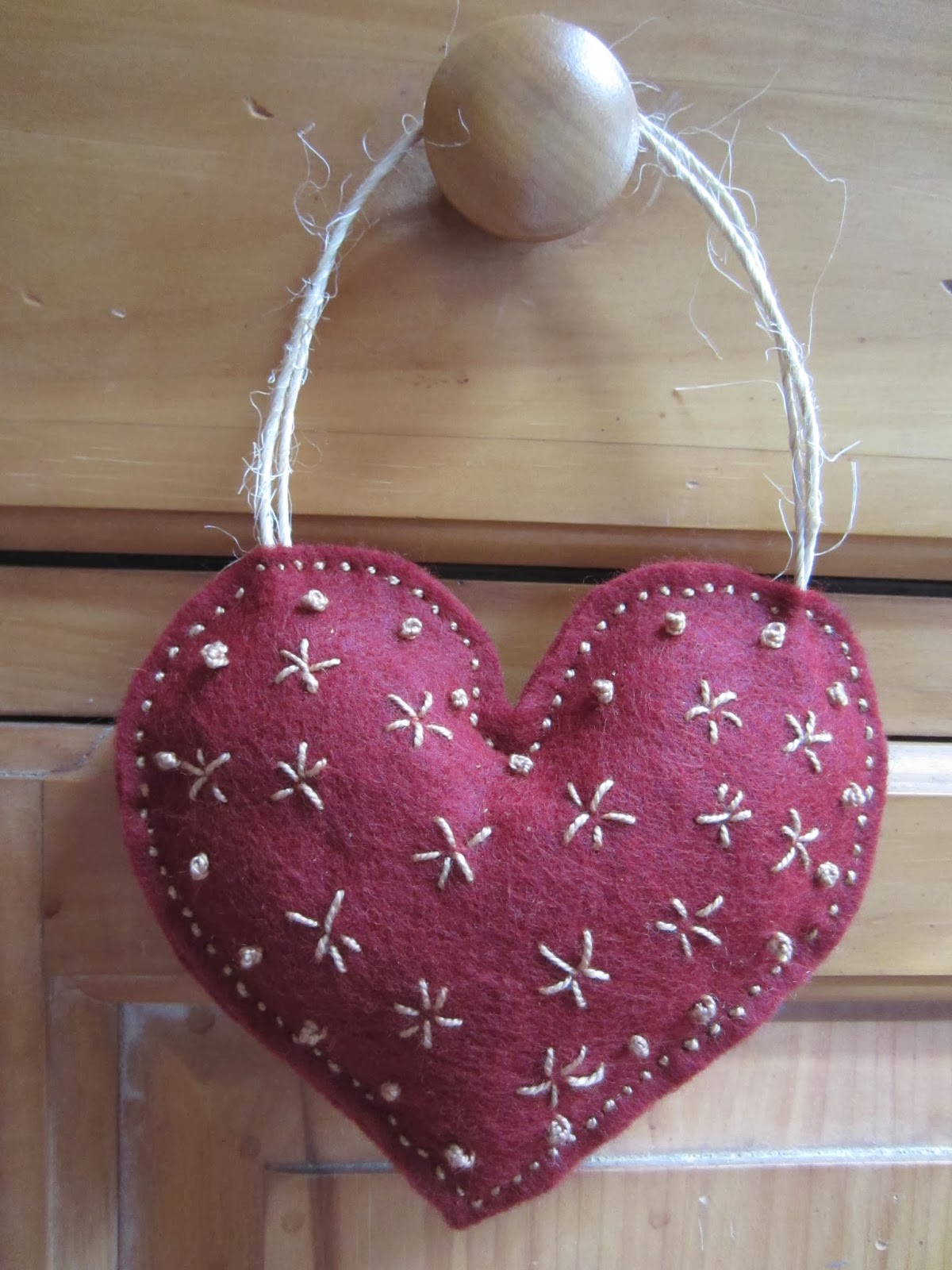 This chubby heart is edged with a simple back stitch. 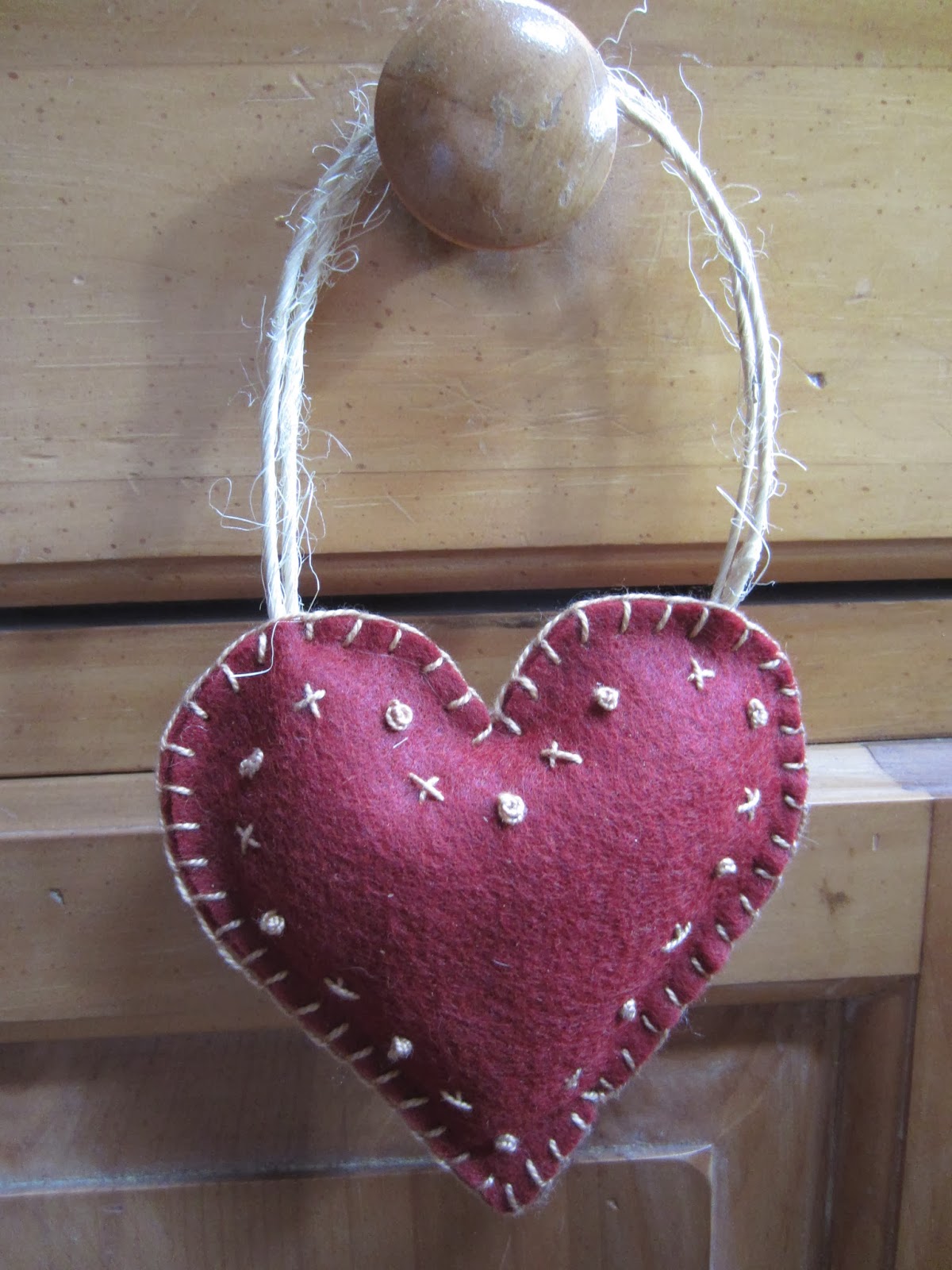 The smallest heart is graced with cross stitches
and french knots with a blanket stitch edge,
to form a hugs and kisses design.
xoxo 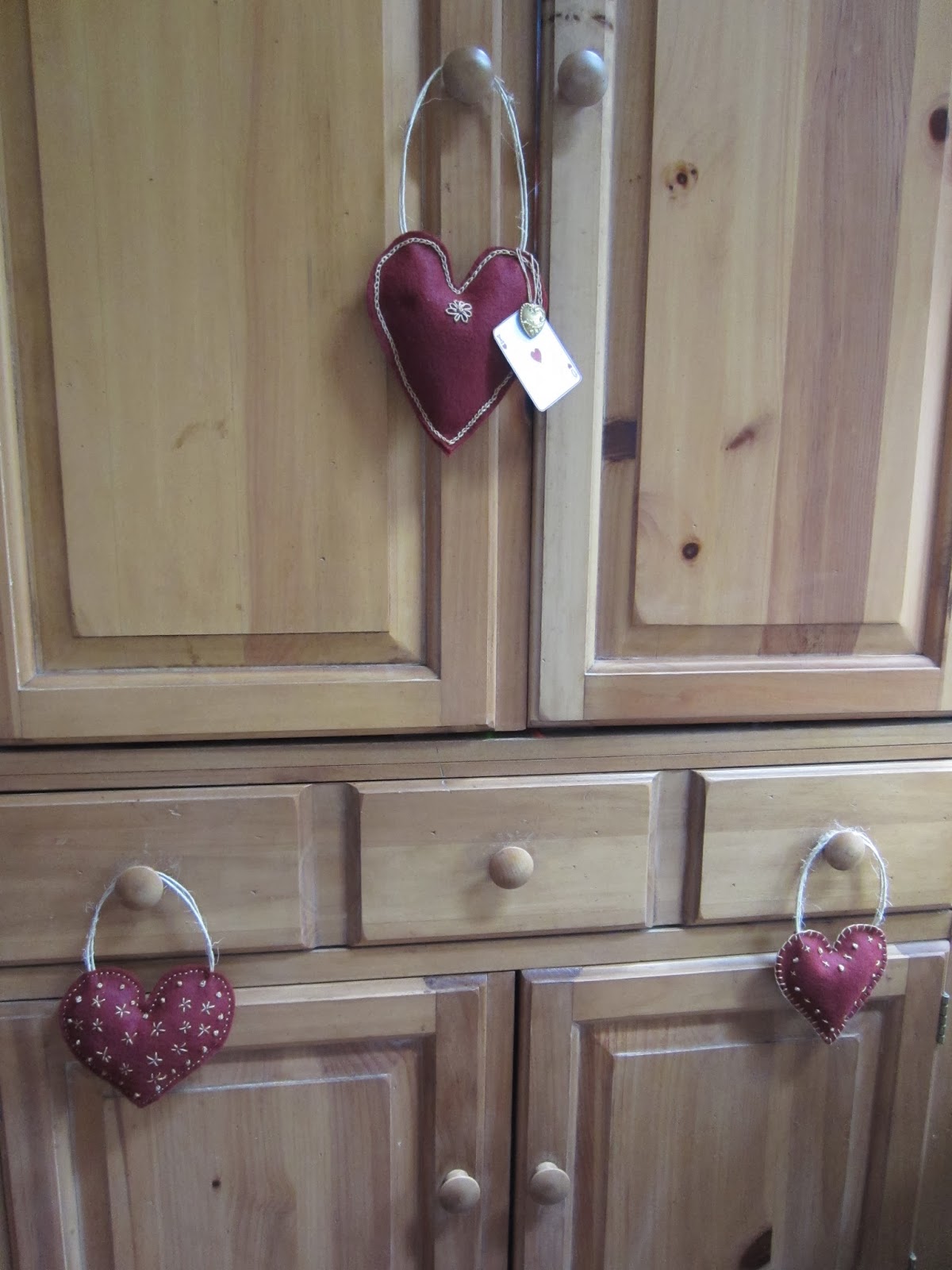 I had fun arranging them on my cupboard knobs. 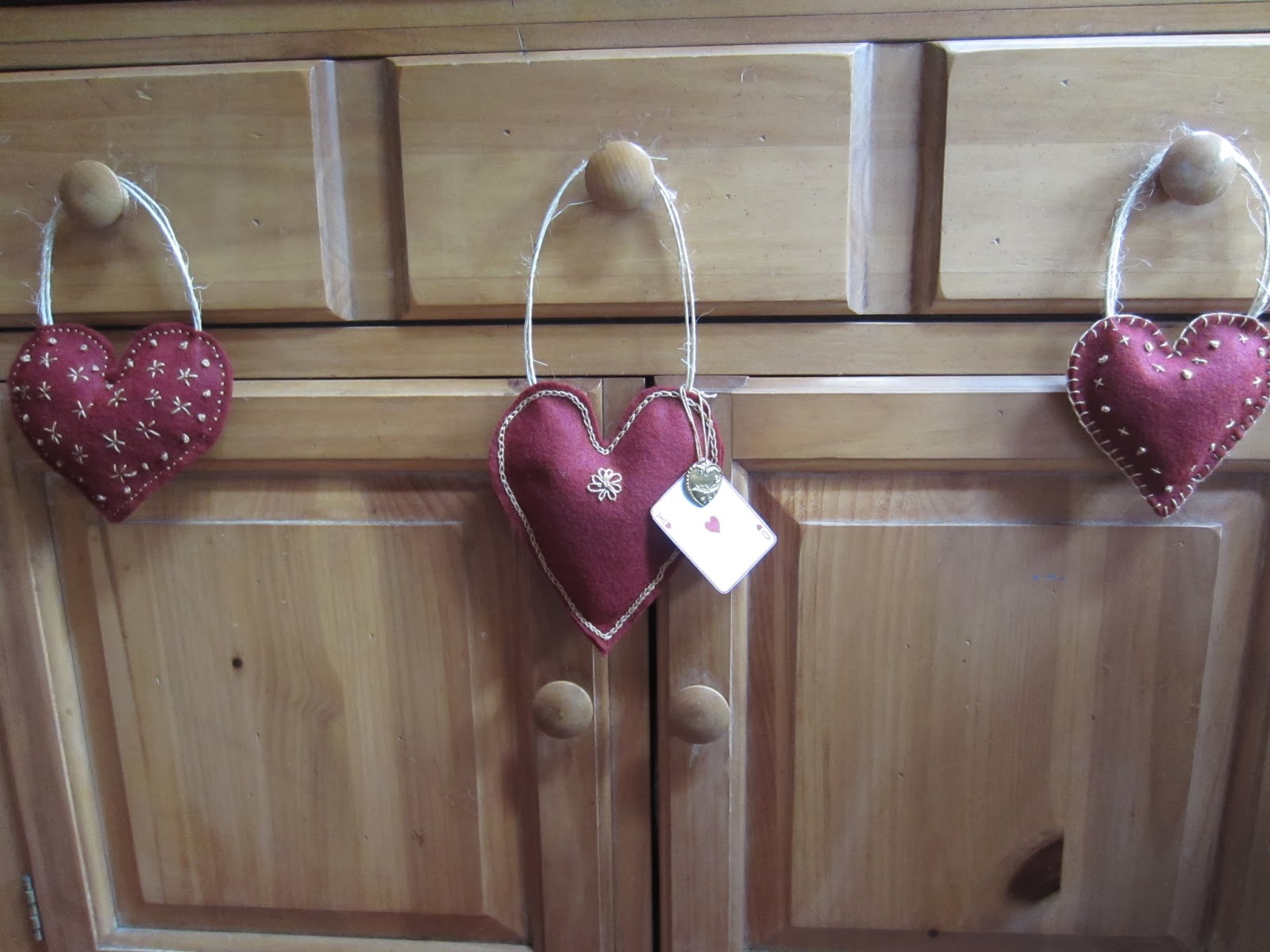 However they were arranged, they made a sweet statement. 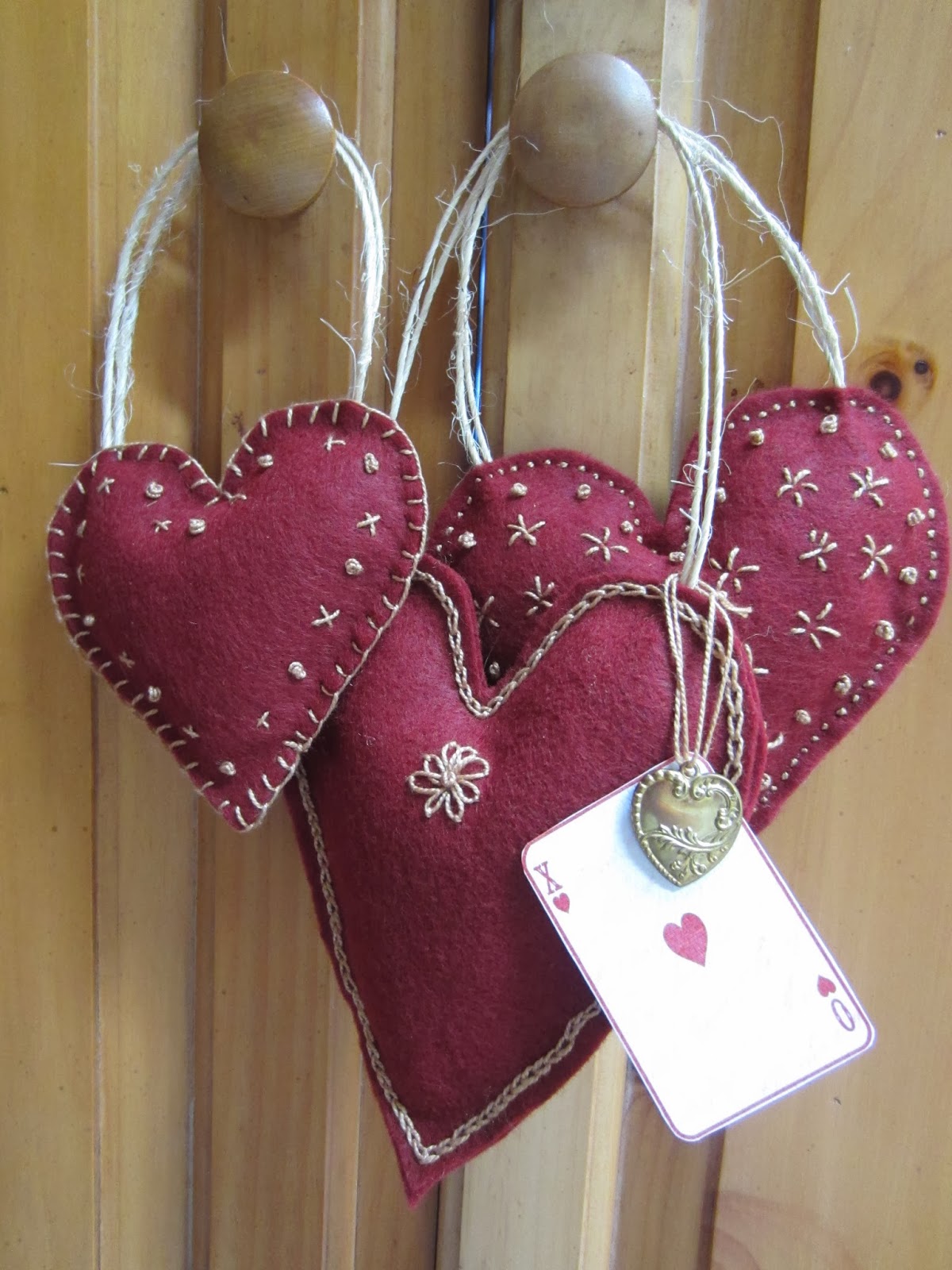 The mind forgets but the heart always remembers. 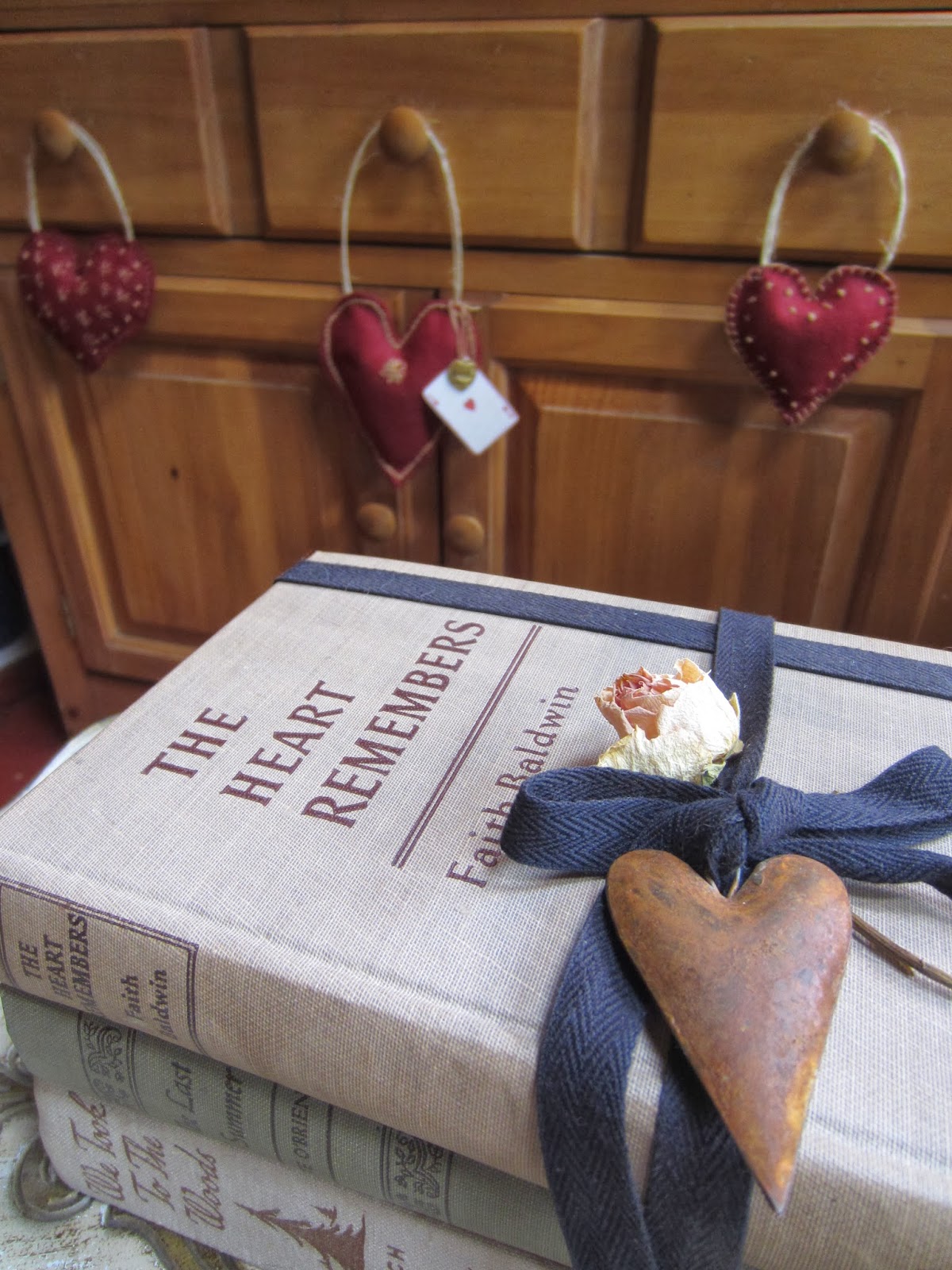 I hope this inspires you to create your own Sweet Hearts! 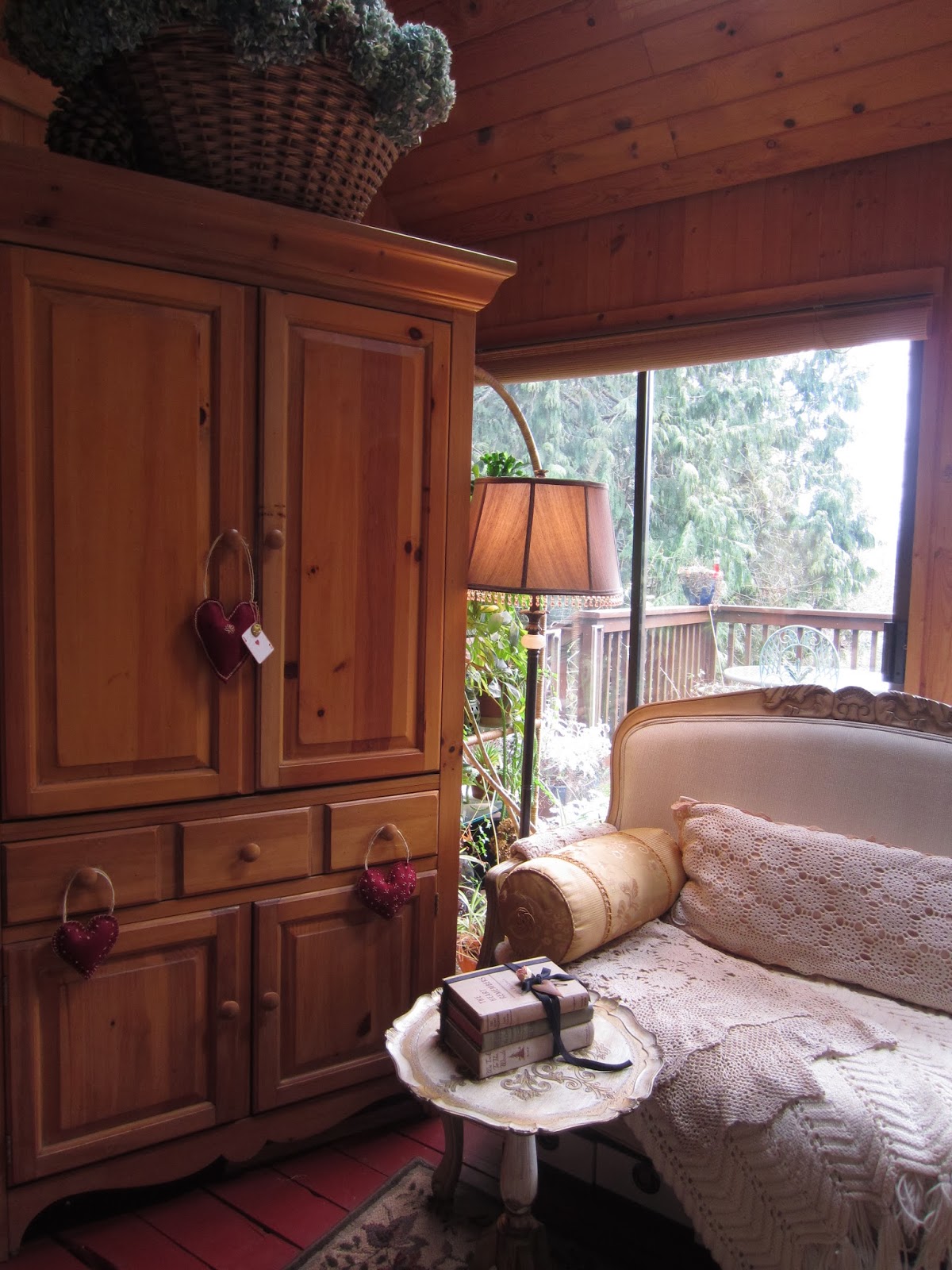 
The best and most beautiful things in the world cannot be seen or even touched.
They must be felt with the heart. 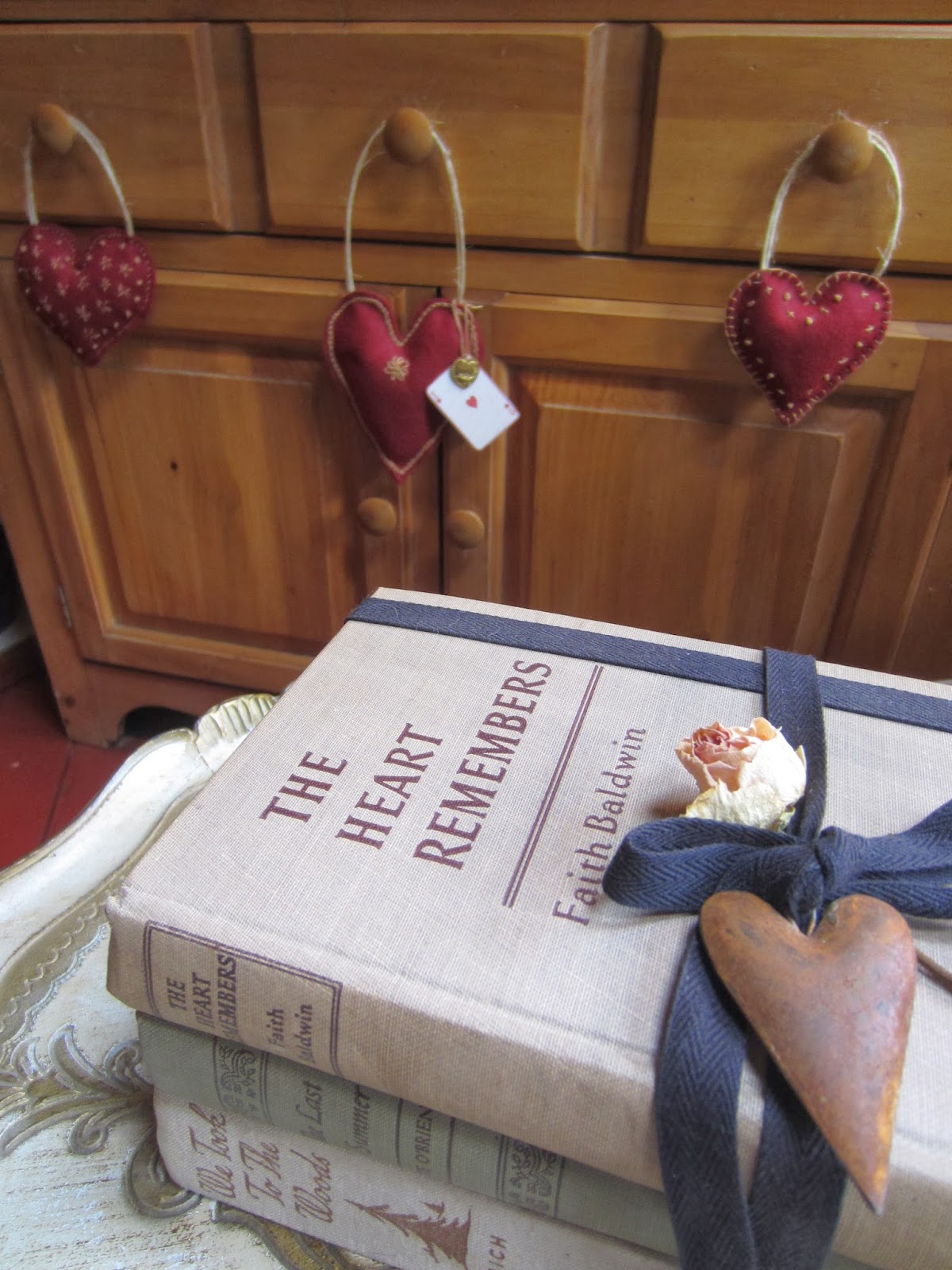 The vintage book, 'The Heart Remembers', was published in 1941 by Faith Baldwin.

Faith Baldwin (1893 - 1978), was a very successful U.S. author of romance and fiction, publishing some 100 novels, often concentrating on women juggling career and family.
In 1935, she was described as the newest of the 'highly paid' women romance writers by Time Magazine. Her popularity was at its peak in the 1930's and in 1936 she earned over $300,000 (equivalent to $4 million). She continued writing novels until her death in 1978.
Many were made into films and in the early days of television, she hosted a weekly Saturday afternoon anthology series on ABC network entitled 'Faith Baldwin Romance Theater'. From 1958 - 1965 she wrote a column in Woman's Day Magazine called, 'The Open Door'.
When asked about her philosophy, she responded that her belief was simple: "It is God and His Spirit in mankind. It is in man and his struggle. It is in the Golden Rule and the valor of men, however ignoble their shortcomings."