Garden Tour in the Northwest 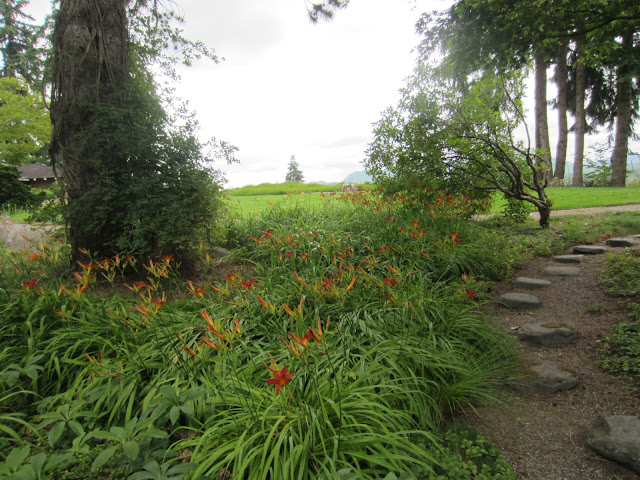 Today I went on a garden tour with a dear friend to Chase Garden in Orting, WA.

This garden was once the private retreat of Emmott and Ione Chase, and is now in the hands of The Garden Conservancy, a national organization dedicated to the preservation of America's foremost gardens. 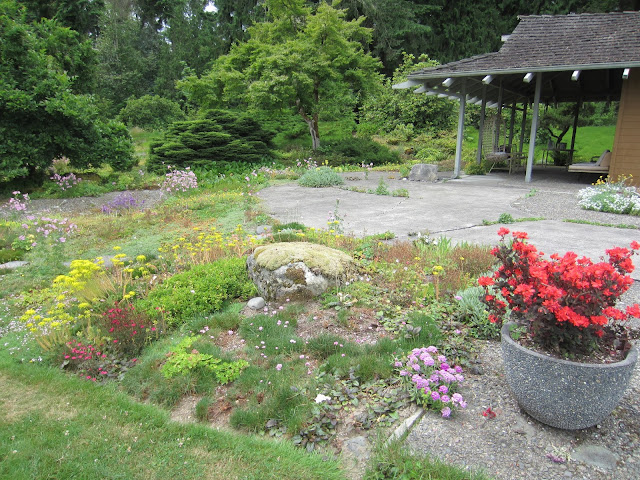 Emmott Chase transferred the garden deed to the Conservancy in 2010 just before his death at age 99. Ione died in 2006 at age 97. This garden represents nearly 50 years of their loving dedication. 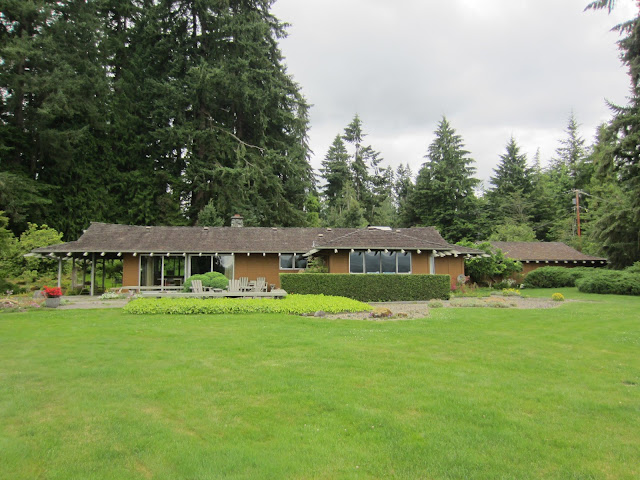 At the edge of this lawn there is a spectacular view overlooking the Puyallup River Canyon and majestic Mt. Rainier, a mere 15 miles away. 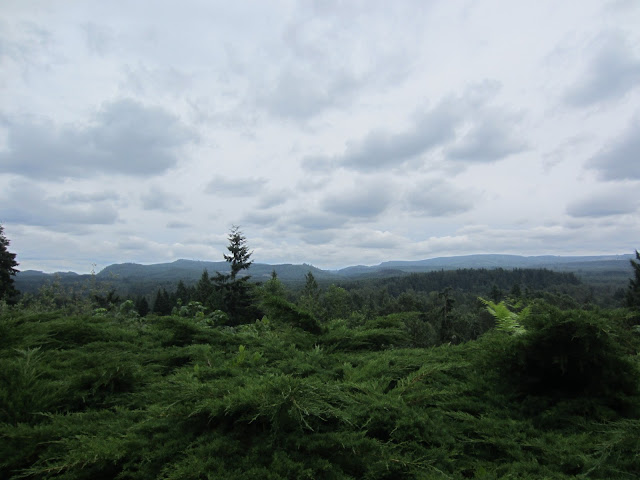 This was the view today, but if the clouds were lifted you would see a most outstanding view of Mt. Rainier. (You can see that on the website.)

Of course it was the only cloudy day we have had all week! 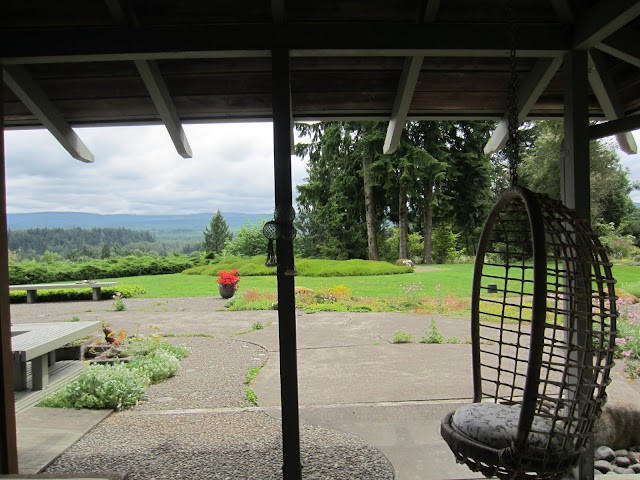 Nevertheless, it was still pretty spectacular.

Ione Chase was the vision for the garden and Emmott was the brawn. 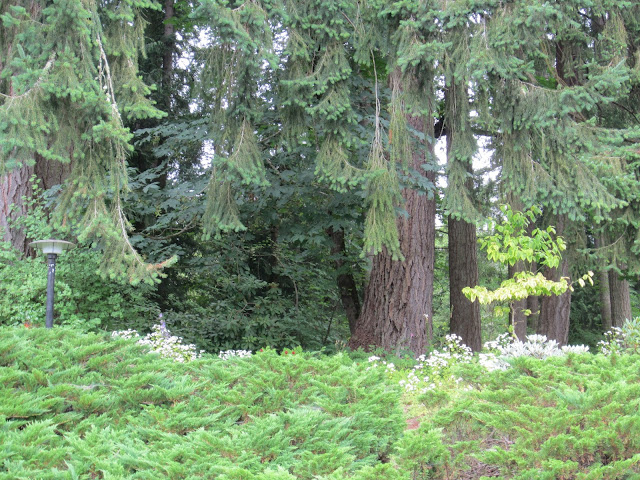 Her vision was of alpine meadows as they move from meadow to forest. She has blended the natural flora of the Pacific Northwest with a Japanese-inspired design. 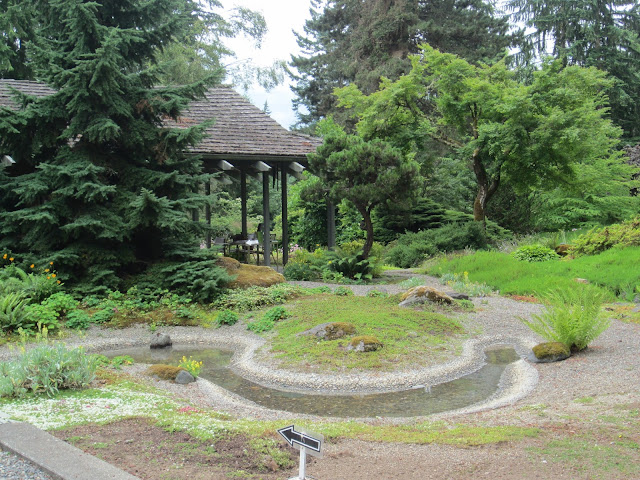 The area surrounding the mid-century styled home is a rolling landscape of alpine plants, including lithodora, phlox, adjuga and other low growing plants. 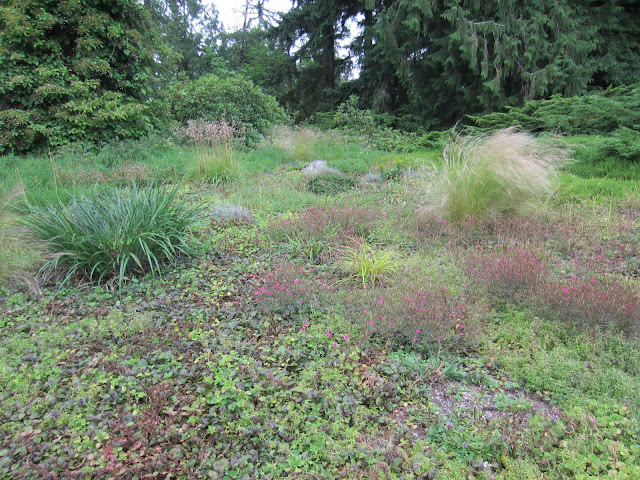 Natives were a favorite of Ione, but she wasn't a purist. 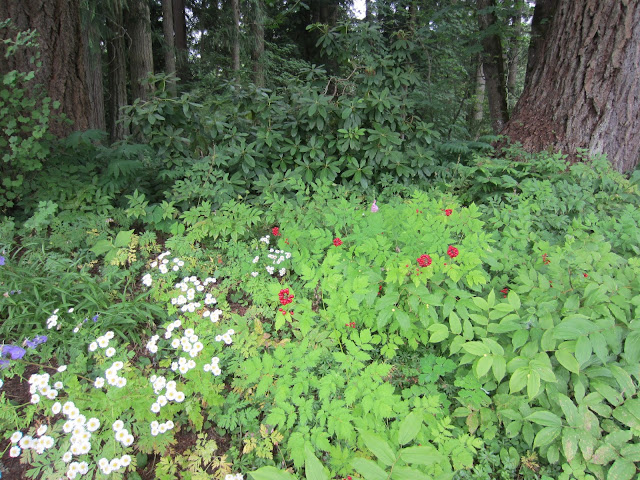 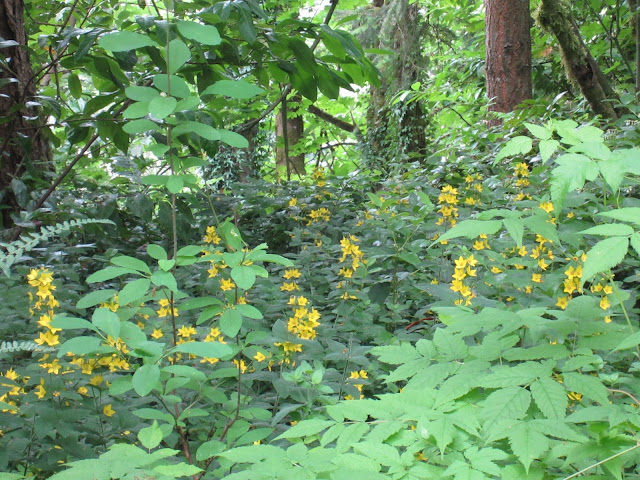 One unusual feature was allowing clematis to scamper over and around the woodland flowers on the ground, left to find its own natural trellis. 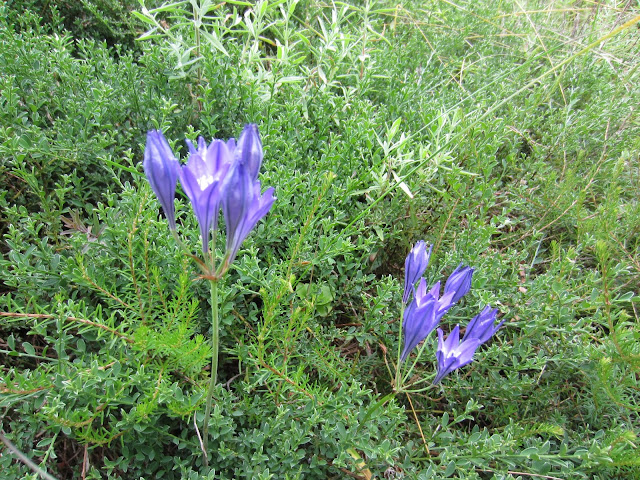 True to a natural style, tiny wildflowers popped up here and there, scattered among colonies of ground covers or peeking out from around moss covered logs. 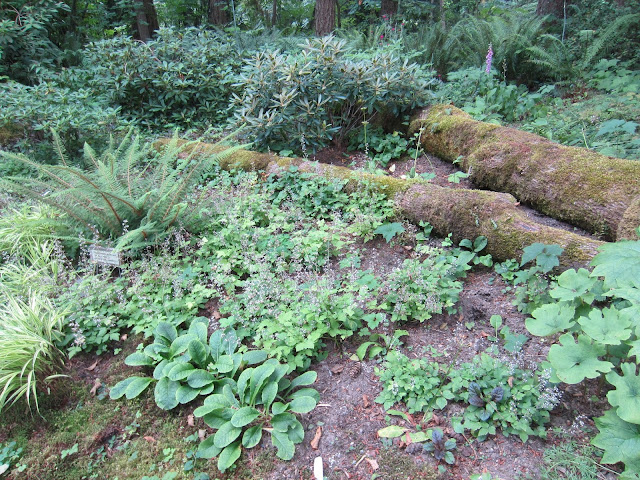 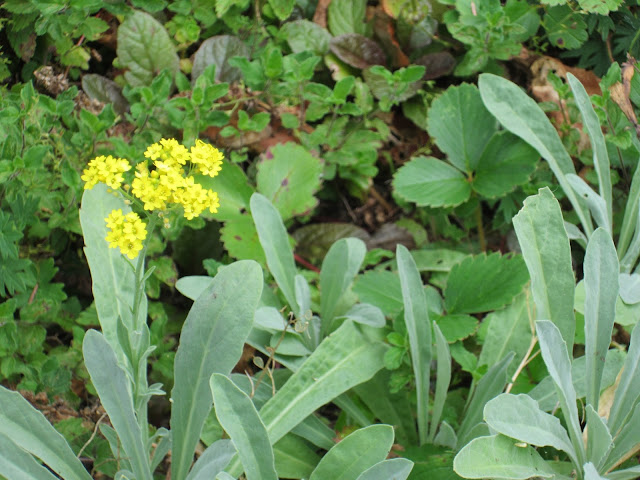 Trails led into the woodlands under a canopy of 100 year old Douglas fir, hemlock and cedar.

Native dogwood, vine maple, red elderberry, and huckleberry make up some of the understory trees. 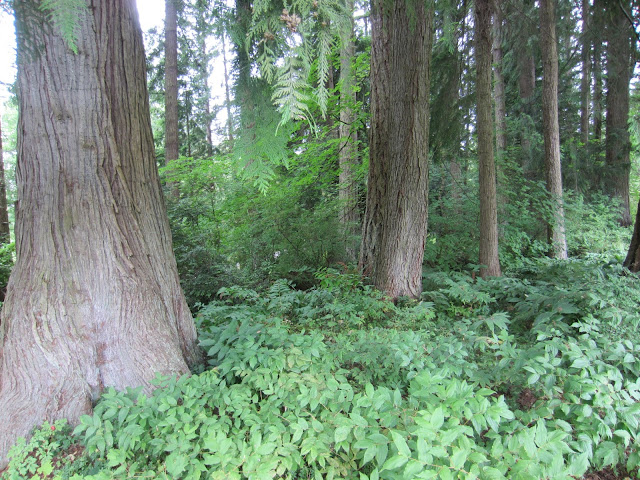 Horticulturist and head gardener Jeannette Matthews works very hard to stay true to Ione Chase's gardening philosophy. She has been at the garden since 1998 and got to know the Chase's and their wishes. 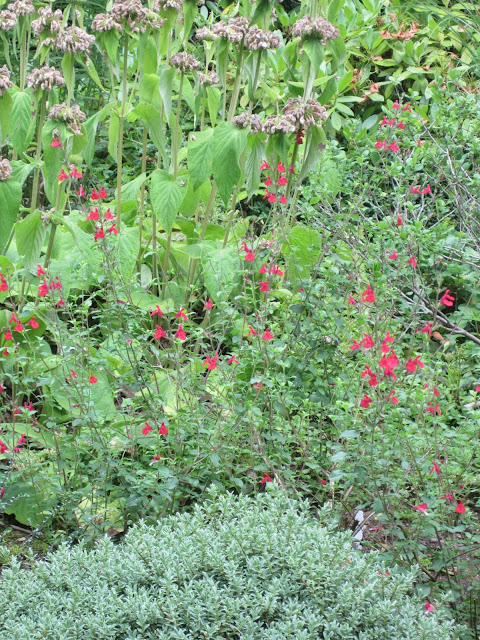 The garden is at its peak the first two weeks of May. The Chase's spent August and September at their cabin in British Columbia and did not design their garden with much summer color, so the volunteer group, Friends of the Chase Garden, are working to add more interest to the summer garden. 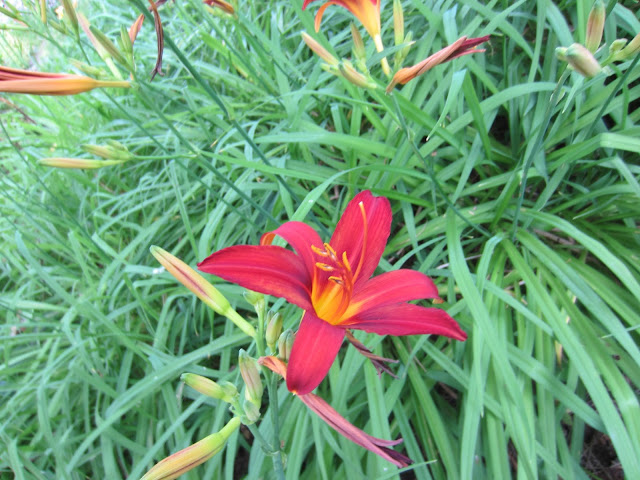 A large bed of daylilies add bright color along the edge of the forest. 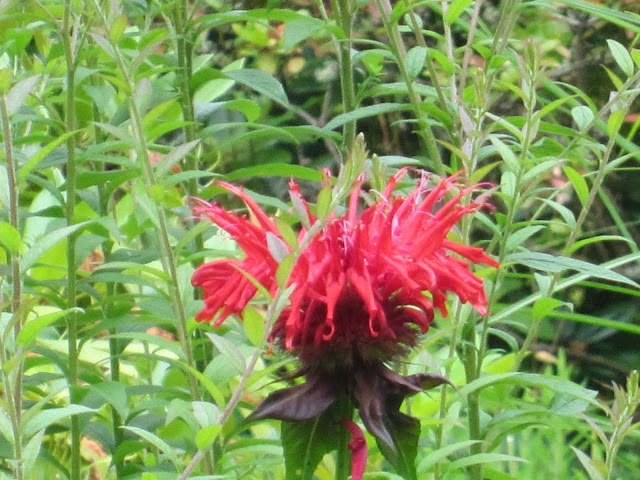 This monarda was nearly as large as a dinner plate! 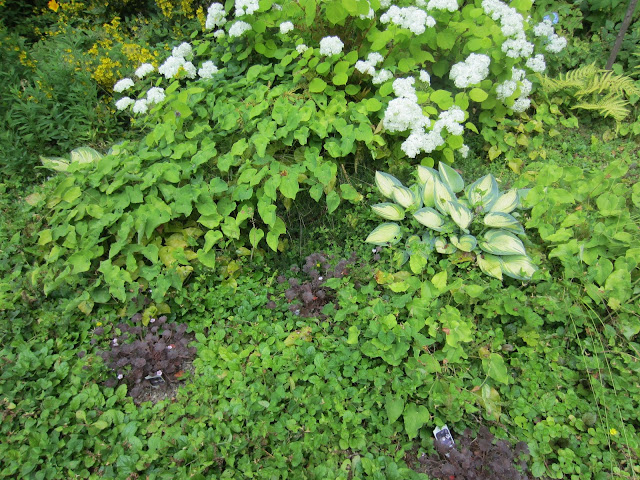 The drive to the gardens was almost as pretty as the gardens! With towering trees and peeks of river and mountains along quiet country roads. 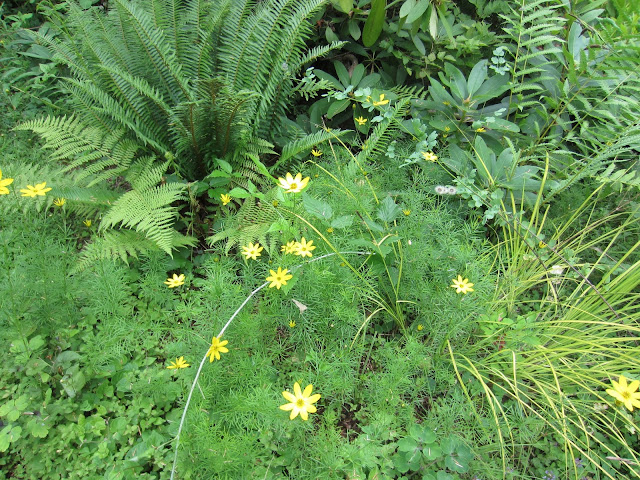 If you are ever visiting the Mt. Rainier area of Washington State, this garden is a lovely place to spend an afternoon. 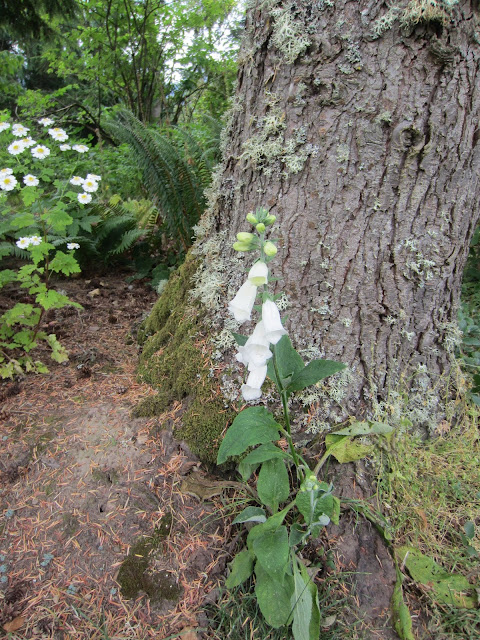 Don't forget to bring along a little picnic!

I know I will be visiting this beautiful garden again to see the changes over the seasons and to get inspiration. 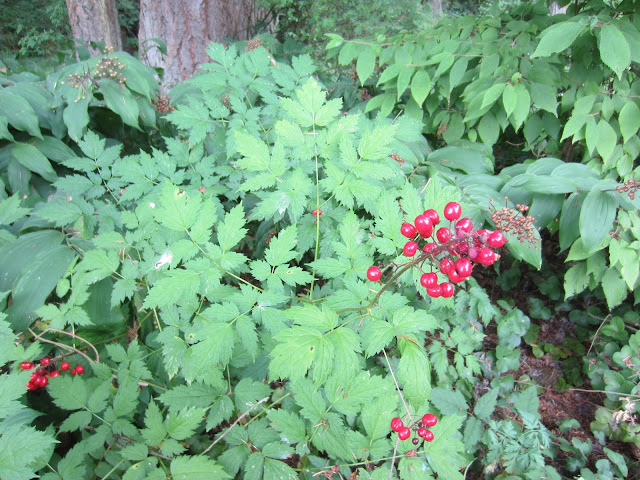 Do you have a local garden that you like to visit? 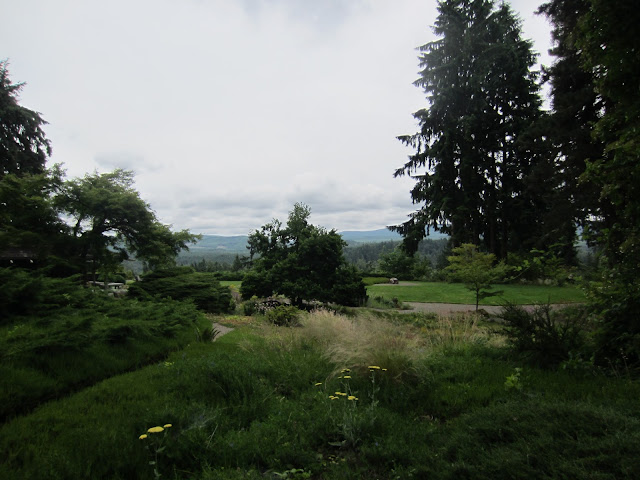