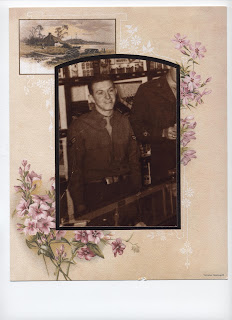 With Father's Day fast approaching, I wanted to pay tribute to my Dear Dad. Being the eldest of five daughters, I have my own unique memories and loving relationship with my Father.
There was a time when I was the apple of my Father's eye. I clearly remember standing in line at the local ice cream stand, looking up at my Dad so handsome in his Army reserve uniform. I held tightly to his hand, so proud because I, too had on a miniature version of Dad's proud uniform. I wanted to wear it everywhere I went with Dad. I was four years old. Dad was a tank commander in what was then called the 'Army-Airforce' before I was born. He served his time in Albuquerque, New Mexico, then in the Aleutian Islands of Alaska during the Korean War. He told wonderful stories of his time in the service. Stationed on an isolated Island in Alaska, he had to deal with marauding Grizzlies, howling Wolves, and Polar bears. Once a week it was his turn to do 'patrols' in his army jeep, driving the perimeter of the island late at night all alone. He saw Northern Lights and shooting stars, and heard the lonely sounds of howling wolves. He loved every minute of it.
By the time I was 5 years old, there were three of us girls and I was no longer Dad's only little princess. Dad worked hard to provide for his family, buying a sweet little home and working long hours as a tool and dye maker. No matter how tired he must have been, he always came home with a happy smile and warm hugs for his girls. There was a popular song at that time, called 'Bobby's Girl' and we all sang it whenever he came home. You see my Dad's name was Robert and everyone called him 'Bobby'. I can still sing the song: it goes, 'I wish that I were Bobby's Girl, that's the only thing I really want to be'.
Soon our family grew to five little girls. Dad always wanted a boy, but he was just as happy with his  girls. Most of us were Tom Boys anyway, and Dad taught us all the fine art of building forts, climbing trees, rowing a boat, and setting box traps to try and catch critters. I caught a chipmunk once after patiently waiting for hours for him to come and get the peanuts I set out. But when I tried to pick him up, he bit me so hard, I can feel it to this day. I would have never wanted to hurt him, and didn't intend to keep him, but I was so upset that he bit me! I can still remember my Father trying to stifle his amusement while I glared at him for not telling me how sharp a chipmunk's teeth are!
Dad worked hard and eventually got promoted at work to 'Foreman' of the company. His boss liked my Dad so much that he let us use his mountain cabin in the White Mountains of New Hampshire any time we wanted. Oh, the fun we had, climbing the beautiful grassy mountain sides, exploring for berries, picking apples in the big cow field behind the cabin. I can still remember going down to the town square every morning to fill up the big glass bottles with water from the town spring, my Dad effortlessly hoisting them under his arms. The cabin had water, but it came directly from a creek beside the cabin, so we needed drinking and cooking water. One time we stayed at the cabin late in the season and we woke up to four feet of snow. My Dad had to climb out one of the upstairs windows to go out and shovel the doorway so we could open the door without a bank of snow falling inside.
We lived in our own log cabin in a little community of cabins on a big lake in Massachusetts. Dad taught me how to swim and fish and dig for bait. I spent every summer getting up at the first light of dawn to go down to the lake with my little friends where we would spend all day, fishing and swimming.
When I was 11 we moved to a larger home along the banks of a little pond with a mill house at one end with a dam and little waterfall. In the summer we fished and rowed our small boat all around, and in the winter we had ice skating parties complete with bonfires. Dad would have to test the ice before we were allowed to skate, and he would spend hours shoveling all the snow off an area so we could have a big ice arena.
Dad told wonderful stories of his childhood. He was born on an 800 acre farm, owned by his Grandfather, in a home that is now on the historic register. He was very close to his Grandfather, and told us stories of his Grandfather's life. He drove a stagecoach as a young man and one of his stops was the old Toll House in Whitman, Mass., of Toll House Cookie fame. Later, when I was a young bride, I worked there for a summer after they turned it into a restaurant.
His Grandfather grew every type of vegetable and fruit on his farm and took the produce up to Faneuil Hall in Boston. He was always accompanied by a little white dog and sometimes he would take my Father along with him.

When his beloved Grandfather died, the farm was sold and times were hard, as this was during the Great Depression. Dad was one of eight children, and he had to go out to work, selling newspapers and picking beans to help out the family. His own Father worked on a Chicken Farm and later in a Nursery, as farming was the only thing he knew.
Dad was determined to give us a better life and worked many hours to achieve his dream. He was always painting or wallpapering, doing yard work or whatever it took to give us a beautiful home.
He also dabbled in town politics, becoming 'Town Selectman' for a term.
After I became a young bride, my Dad lost his good job after his long time boss died and the machine shop was sold. That didn't stop Dad, he packed everyone up and moved out West on another adventure. He ended up in New Mexico, with my 3 remaining sisters and Mom, to build a dream home on land overlooking the Sangre De Cristo Mountain Range. But as fate would have it, as soon as the beautiful home was completed, he lost his job at the Los Alamos Labs and had to sell the house before he even got to live in it.
So off he went again, to Oregon and later here to Washington, where he built another home on land overlooking the Cascade Mountains and Mt. Rainier. This house, he built literally by hand, as it would be over a year before he had electricity. He would go to work every day and come home and work on the house. It took a while, but he eventually built a cozy, beautiful home where he and my Mom spent their final years. During this time, Dad ran for office in his Union and became Union President in the Steel Workers Union for two terms.
Everyone loved Dad. He had a bright, cheerful disposition, and a happy smile for everyone. The thing I loved about my Dad the most was the way he would always be so happy to see me, his bright cornflower blue eyes warmly smiling his love. My Children called him Papa and the sight of him would send them running into his arms. He always had a little story to tell, or a funny tale and always looked on the bright side of every situation.
Dad taught me so much about life. He taught me how to keep a positive outlook, how to be kind and lend a willing hand, how to persevere through adversity, and to believe in myself. He passed along his love of the land, of nature, of the simple things in life. He was my hero. I wish I could tell Dad all these things. But Dad is in a nursing home with Alzheimer's and doesn't even know me anymore. So if you have a Dad that you love, don't wait to tell him how much he means to you. Tell him now, and tell him often. Dad, I hope you know how much I love and admire you. And I always will.
Posted by Karen @ Beatrice Euphemie at 10:45 AM