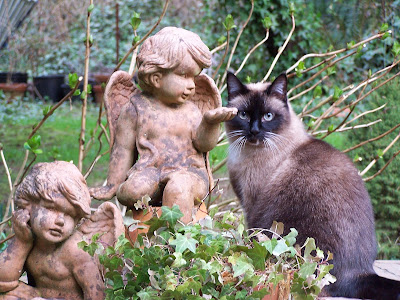 Hello, Dear Friends, it is with a heavy heart
that I tell you that Sorrow has knocked upon
our door once again, and we have lost
our sweet Siamese, Ling Ling.

We had been treating her for what we thought
was an inner-ear infection,
when it became clear over the New Year's holiday
that it was much more serious.

She had become increasingly disoriented
over the last two weeks-
stumbling and circling,
eventually this past weekend, unable to get up at all. 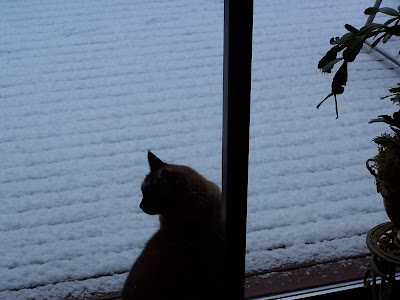 We gave up New Year's plans to stay by her side
and a very compassionate, local Veterinarian,
Dr. Robin Gardner, and her dear husband,
drove all the way out to our home
to assess the situation, but it was determined that
our dear Ling Ling had a possible neurological event,
and was ready to cross that Rainbow Bridge. 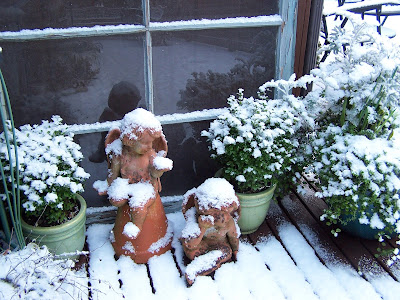 So, on a cold and snowy night, held
tightly in my arms, we said goodbye
to our sweet Ling Ling and summoned
the Angels to assist her on her way. 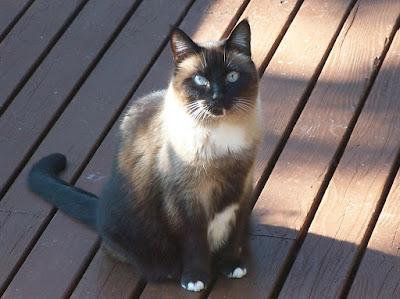 Ling Ling came into our lives under sad circumstances,
but brought so much love and joy along with her.
She was my Parent's beloved cat,
and when my Mother passed away in 2011,
she came here to live with us. 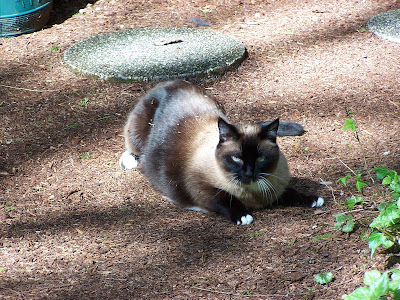 I wrote a short story about her for my
Newspaper column back in 2011, and due to scheduling changes,
it was never published, but I will share it
with you now.

When my Father finally had to go to live in the nursing home after battling Alzheimer’s disease for years, my Mother was left alone to live in the home that she and my Father had built together. They were married for 58 years and rarely spent a night apart. The Siamese cat that my Father loved became my Mother’s comfort and loyal companion. Even though Mom had five daughters willing to help, she wanted to remain independent as long as possible. When I would arrive to help her clean the house, or to take her to Dr. appointments, visits to my Father, or errands, I would always find her sitting in her special chair, her faithful companion in her lap.  She confided in me that if it wasn’t for Ling Ling, she didn’t know how she would have made it through the long, lonely nights without my Dad.
Mom’s health began to decline soon after Dad’s move to the nursing home. She had heart disease and diabetes and it was clear that both diseases were taking its toll on my frail 75 year old Mother. After a series of hospital stays due to her progressive heart condition, it was decided that she should be moved to a nursing home for some rehabilitation and to stabilize her condition. She was able to move into the same room as my Dad, something she was looking forward to, as she missed him so. But she worried about her precious kitty, and it was decided that I would take Ling Ling home with me and my husband during her stay.
Ling Ling would be joining a full house, as I already had two cats, two dogs and one cockatiel. At first, she was frightened and wouldn’t come downstairs. For weeks she stayed upstairs in the bedrooms of our empty nest. We let her be, as we had so much on our minds, attending to my Mother’s rapidly declining health, my Father’s Alzheimer’s and the many decisions and heart ache of facing the possibility that my parents would never come home again.  I had many heartfelt conversations with my Mother during that time and it was then that she made me promise that I would take care of her beloved Ling Ling, should she not be able to come home again.
After being in the nursing home for several weeks, it was clear that my Mother would need heart  surgery. After the surgery, she desperately wanted to come home. So it was agreed, we would bring her home and divide her care among all of us. Her precious cat was brought back home to bring her comfort. But after only one week, my Dear Mother passed away in the home she loved, her beloved Ling Ling by her side.
After that terrible day, I went back to my parent’s empty house to bring Ling Ling home with me. My heart was broken and so was hers.
During the next few weeks, Ling Ling and I sought each other out. I knew how much this small bundle of fur was grieving. I could see it in her sad blue eyes and drooping tail. We had suffered the loss of someone we loved very much. Through our grief, we formed a close bond. I could see why my Mother loved her so. She was gentle and sweet, with loving, knowing eyes. I could feel my Mother looking down with happiness whenever we were together. And like my Mother and my Father before her, I fell in love with this sweet little bundle of comfort.


It has been a year now, since my Mother’s passing. Our grief has softened around the edges a little bit. Ling Ling is part of the family now. But she will always hold a special place in my heart, because we share in common, a love like no other. 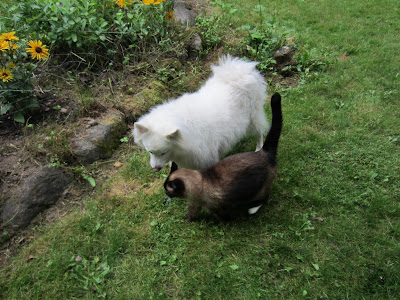 Now we say goodbye to this special little soul
who brought so much comfort and joy into our lives. 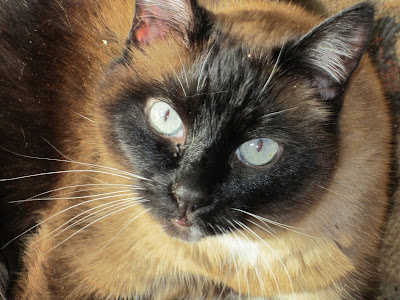 I know my dear Parents are there to meet her
at the Rainbow Bridge.

We will miss you, dear Ling Ling.

We loved you so.
xoxo
Posted by Karen @ Beatrice Euphemie at 5:29 PM